Turkey Top - a flower hike on the Pinhoti Trail

On my second full day of hiking the Pinhoti Trail, I continued on trail more often frequented by mountain bikers than hikers.  The evidence was in the tracks - it was a weekday and I didn't actually meet any live bikers, except on Mulberry Gap Road a road walk section through private land in the middle.  It was a weekday and school was in session, so not prime time for day trippers.

I hiked from Holly Creek Gap (where there's some road walk, too) to the far side of Turkey Mountain.  I'm calling it 'Turkey Top', and my lasting memory is not of turkeys.  Rather, it was the moments I spent in the presence of the 'Throne of the Mountain King' - 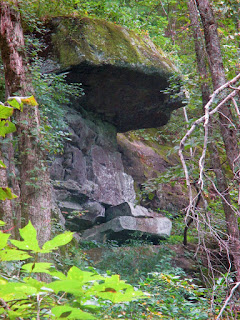 It's a giant-sized chair made of stone blocks, complete with a massive canopy.  It allows the mighty king to survey his domain, including all the Pinhoti hikers and bikers who pass by beneath, then switch back and ramble by unseen on the other side of the summit.  But when the Giant King is holding court, no passer-by goes un-noticed by the Monarch of Turkey Top.

As further 'proof' of the bicycle-orientation of this part of the trail, I present this maintainer's mark. 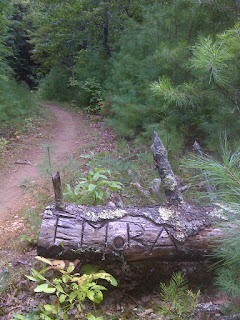 It appears that this section of the trail is maintained by the 'Ellijay Mountain Biker's Association.'  And they do a first rate job.  No blow-downs across the trail, no weedy overgrown sections, no gnarly eroded footpath.  It was smooth, well designed trail.

Other than the Turkey Top cliffs, of which the Giant-King's throne is part, I had no expansive views, so my focus turned to the smaller sights.  Late summer in North Georgia provides plenty of interesting wildflowers, including several that I'd not seen before.  Foremost among these was the Starry Campion, also called 'Widow's Frill'. 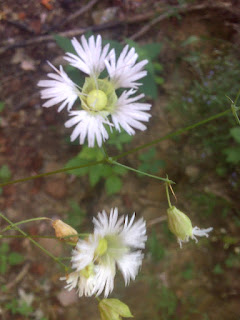 I wish the shot were in better focus.  I was fascinated by the way the petals emanate on tiny stalks and splay out, almost like little hands.

Then there's this little ball that looks just like exploding fireworks. 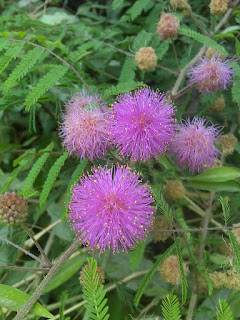 It's a close relative of the 'sensitivity plant', Mimosa pudica, which is a tropical plant, native to South and Central America, though it is said to grow in Georgia.  But this is probably a native relative, Mimosa nuttallii, 'Sensitive Brier' which had a more intense color to its bloom and is native to the central US.

Then there's one of my old favorites.  Despite the fact that this is an invasive, the Chinese Dayflower, or Asiatic Dayflower, wins my heart because it is the 'bluest' flower there is, in my opinion. 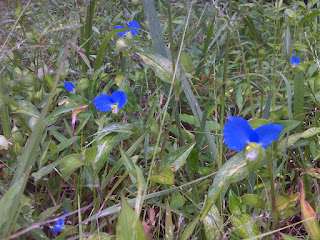 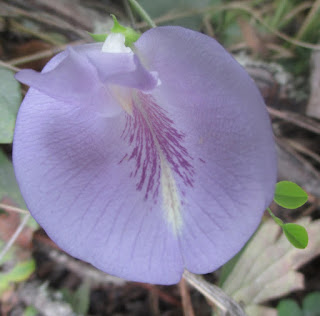 Hmmmm ... maybe I'm just a dirty old man.  But in any case, this flower, like most, does an excellent job of directing the haphazard, near-sighted pollinator insects to its prize.

For me the prize was simply capturing the image.  I'm a voyeur.  "Leave nothing but Footprints and take nothing but photos" is sage advice.  My Personal Continuous Footpath has now left an unbroken trail of footprints through Fifteen states, and the Pinhoti Trail is leading me quickly on to a sixteenth, Alabama.

And then it's on to Florida.  I'll get there on foot or I'll bust myself trying.

Here's a map of the day's travels.