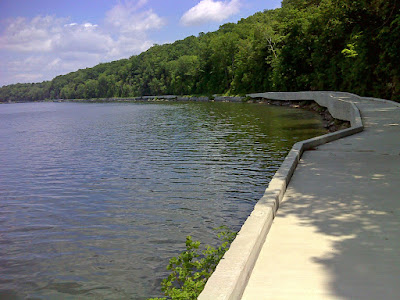 I spent a couple weeks on the road in the middle of May.  The central purpose was to accomplish some business and to visit with family, but I took some extra time to do some scenic driving and some hiking along the way.  The highlight of the hiking was a 25 mile stretch of the C&O Canal Towpath that included the newly constructed section called Big Slackwater.

I highly recommend it.  If you only visit one section of this 185 mile trail, this is the one, in my opinion.  Most of the rest of the path is in the woods beside the Potomac River, but with only occasional glimpses of the water. As the photo up top shows, Big Slackwater puts the hiker right on the shore of the river, sometimes with the water lapping under the concrete segments of path that the Park Service installed in 2012. 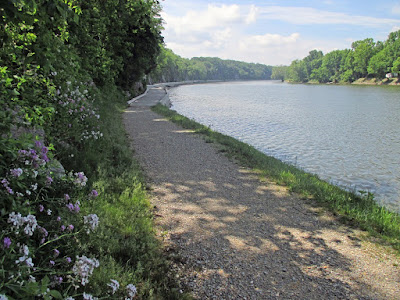 This is a section of the Towpath where there is no canal.  Because of high cliffs right along the shore, the engineers chose to dam the river ...

... and send the barges out through guard gates into the river.  Here's the guard gate at the downstream end, showing a detail of the groves cut by decades of tow ropes rubbing the rock as the boats turn the corner and head out into the river going upstream, or return to the quiet canal on their way down to Washington. 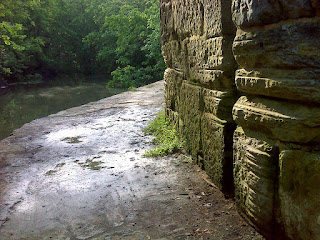 Over the years since the 1926 final closure of the canal, erosion from floods had destroyed much of this exposed section of the towpath, but the park service was determined to re-open it.  Their solution was these pre-fab sections of concrete 'bridge'.  They should be sturdy enough to withstand most of the floods the river can throw at it.

I hiked and biked (one mode of transportation each way) the section between Taylor's Landing boat launch ramp a few miles below below Dam Four through Williamsport where there is a Park visitor center, and on to Dam Five which is a dam built to supply water to the section of the canal down to Big Slackwater. 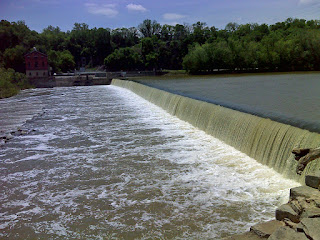 Although the C&O Towpath is predominantly used by bicyclists, I believe it is best appreciated on foot.  I did it both ways.  On bicycle you pass the scenery too quickly and miss much of the detail.  On foot this smooth level path allows your eyes to wander and take in the scenery--a luxury that mountain hiking on uneven footing seldom affords.  Here beside the river it's not so much a hike as it is a stroll.   And a delightful stroll it was in Mid-May.  It was cool and green and largely untouched by civilization, except for an ugly mile of riverside trailers around Falling Waters where the towpath doubles as a public road.  And then there's the short stretch near the I-81 bridge where traffic noise competes with the river's murmur and the song of the wood thrush. 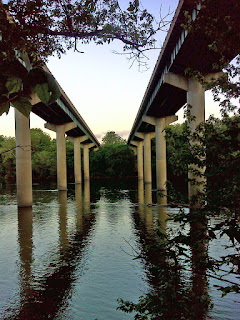 This is the second section of Towpath I've hiked.  My report of the section between Harpers Ferry and Taylors Landing can be found here.  I will be back for more.
Posted by PJ Wetzel at 10:49 PM