This is part 26 of a 31-part posting of my journal entries and photos from one of the greatest experiences of my life so far--a month-long mountain climbing trip to the Atacama Desert area of northern Chile and Argentina, which included summiting three 6000 meter peaks (~20,000 feet).  To view all the entries in this series, check the posts labeled South America.

It was another cold night--about 15 degrees. But that was up from about 11 degrees the previous morning. I didn’t sleep at all until around midnight, both because of the long sleep last night and the caffeine in the GU I ate during the Volcan del Viento summit climb yesterday. I got up at 8AM and had breakfast and packed up.

We were on the trail about 9:45AM after saying good-bye to the Argentineans, one of whom was clearly continuing to suffer from cold and/or altitude. We hiked at a good pace, up over the little pass then down, down, down. 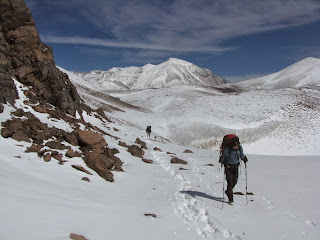 Shortly after surmounting the pass we met the mules coming up to pick up our stuff. 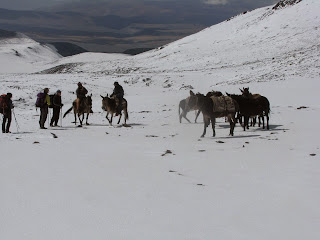 They also had the black bag that the Argentineans were expecting. We left the snow behind about half way down--a third of the horizontal distance to cover today.  That's where I stopped to photograph the wind-sculpted rock shown above.  As usual we stopped after an hour of walking for a snack or for lunch.

We whipped right past our intermediate campsite at Aguas Vicuñas and got to our campsite at 13,500 feet at Aguas Calientes about 4PM. We had carried two tents and some cooking stuff with us expecting the mules to arrive late. That was a good choice because we sat around until 6:30 before the first of the mules arrived. They were late because they had to transport the sick Argentinean guy back down on a mule.

We had supper and chatted and then more mules came with more tents and my duffel. We set up and I then took a walk a short way back up the valley to check out a cave big enough for shelter for our whole group. It was right off the valley floor overlooking a small cascade in the stream. I returned to the group for a minute or two of chat then retreated to my tent (tent-mate Barry tonight) and caught up on my journal, finishing just as a thunderstorm developed to the northwest over the places we had been for the last several nights. That was at 8:25. I settled into my sleeping bag and relaxed and listened to the frequent thunder. It rained a little then the rest of the night was quiet and mild. Tentmate Barry settled in when the rain hit and we went to bed around 9PM.