Here is a four-part conclusion of the 31-part posting of my journal entries and photos from one of the greatest experiences of my life so far--a month-long mountain climbing trip to the Atacama Desert area of northern Chile and Argentina, which included summiting three 6000 meter peaks (~20,000 feet).  To view all the entries in this series, check the posts labeled South America. 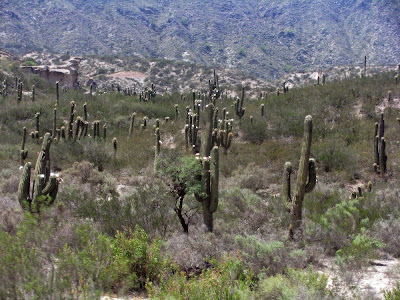 The trip home to the northern hemisphere, thousands of miles north and slightly west of where I began this morning, took me south and slightly east – straight in the wrong direction – for the first two days, first by bus, then by plane to Buenos Aires.

It began at 8:55 this morning when I hauled luggage to the front of the Hostelria where the bus was already waiting. We left virtually on time for the 5 or 6 hour drive to Catamarca. We stopped half way at Aimogasta at a gas station with a little clean snack table area and very clean rest rooms (same place we stopped on the way up). I bought an ‘Imperial’ Beer, an Argentinean beer I hadn’t seen before.

From there we passed through a canyon very reminiscent of Tucson, Arizona, with saguaro-like cacti.  See the photo above.  They were notable on the way up a couple weeks ago, but now they were in bloom! It may have been the rain that fell here that triggered it, or perhaps it’s just normal seasonal bloom. My photos were taken from the moving bus. 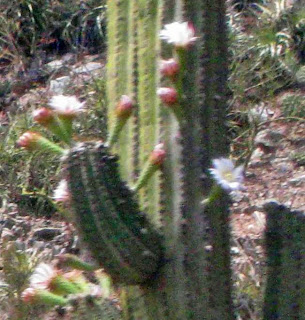 We got to our hotel Arenales at about 2:40AM after the bus driver, who apparently had to hand a bribe to the police checkpoint person coming out of Fiambala (I suspect his bus inspection was not in order because his brakes seemed to be squealing and thus probably in need of repair), took back roads to avoid the check point coming in to Catamarca.

We went to a restaurant right around the corner and had a big celebration dinner that totaled more than $20 US dollars per person--pretty extravagant for prices here because we all ordered lots of food. John and Thom and Barry leave early in the morning for their bus ride to Mendoza and then on to the climb of Aconcagua. I had decided not to join them because I would have to sacrifice my air fare and buy tickets for a new one-way flight home.

The majority of the rest of us are flying out tomorrow and will share a taxi or shuttle that leaves the hotel at 11:20 tomorrow morning. I got back to my room at 10:35 and called it a night.

There were four of us left in town the next morning, all taking the same flight to Buenos Aires. We had two compact taxis to deliver us to the airport, one for the luggage and one for the people. Our Peruvian guide Damian was there to make sure everything went smoothly and to give us money to pay the drivers. He would stay in town one more night then return home.

We were on the road by 11:30 and got to the airport about 11:50, relatively early for a 1:05 domestic flight. We got our boarding passes, sat around and visited some, and then boarded the plane, which left on time at 1:05PM. There was a 20 minute hop to La Rioja where most of the passengers got off and somewhat fewer got on. Then we flew the hour and 20 minutes to Buenos Aires. Weather was dreary there, but on the approach I got a good shot of the city with the Estadio Monumental Antonio Vespucci Liberti football stadium in the foreground. 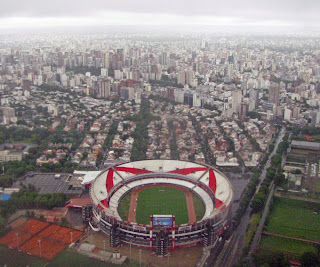 We got our luggage and then said our good byes. John and Phinella got shuttle tickets to the International Airport and Brian headed out to get a taxi--he’s staying in the city for a couple of days of touring on his own. I decided to camp in the airport for the night—the next leg of my flight was not until 8AM tomorrow, so I hung around in the food court, relaxed, ordered two meals, and watched some football (soccer) then settled with my luggage in a quiet place nearby for the night.

I probably actually got a little sleep, although there were so many noisy people who seemed to gather around in my area, some interested in sleeping, others with noisy screaming kids, that the sleep was intermittent at best. At 7:05 I went through security and soon was standing in line for boarding for the 8AM flight to Mendoza.

It was clear and warm in Mendoza when we arrived about 10:30. The airport is small but very clean and spacious, with a nice restaurant and some interesting local art posted on the upstairs walls. Here’s a sample: 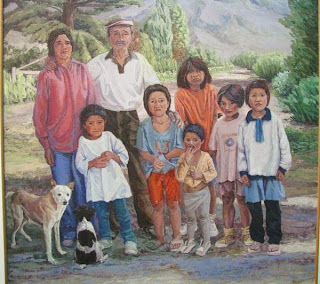 I found that I could not only check my bags right away, but also that I could get an earlier flight to Santiago, Chile, that leaves at 3:05PM instead of my original flight leaving at 6:30. That flight was less than an hour, just up and over the Andes and down. The mountains there were free of recent snow—so I guessed that prospects for my expedition friends climbing Aconcagua looked reasonably good based on the snow cover conditions. (I learned later that they could not summit due to high winds, so I had saved myself a lot of money.)

We landed and I had no customs to go through, just got funneled straight through to the international flights waiting area. Soon I was in the area of the Ruby Tuesday restaurant that I had eaten at on my way to Argentina last time. I sat down there and ordered a really big meal—more than I could finish. I got a Kunstmann Bock (an expensive Chilean beer), water, broccoli and cheese soup, and an avocado burger with a separate plate of fried onion rings. I sat and ate slowly until I could eat no more—total cost about $30. I then lounged around in a quiet area and watched the sunset.

The flight to Miami began boarding about 9:40PM. I found my seat by the window, second from last row and was delighted to find that the aisle seat beside me was empty. From what I could tell, the plane was nearly full, so I was incredibly lucky. That meant I had all sorts of spreading-out options to get a comfortable rest on the 8 hour overnight flight to Miami.

They served us a hot dinner that tasted lousy - wasn’t that hungry after the big Ruby Tuesday meal. Then everybody settled down to sleep and/or endure the night. I put up the arm rest between my two seats and settled in for an unexpectedly comfortable long international flight. What a blessing.

Another advantage of my situation was that I was able to freely go back to the very nearby bathroom, which I did twice. I even overslept the breakfast service, but it didn’t look very appetizing anyhow. I did get one last cup of the great Chilean apple juice--the fresh tasty pulpy cider-like stuff that is not even available in Argentina (nowhere that I encountered anyway).

The plane landed at 5:05AM, still dark in Miami. I moved through the passport check, customs declaration, picked up my luggage successfully (yay!) and moved it through customs and dropped it off at the TSA security point where they would check it and automatically send it on to my connecting flight to BWI (if all goes well).

Security was strict, as I expected, but I was at my gate with laptop fired up by 10:20 after calling the BWI airport shuttle and confirming my reservation with them. So I had an hour and a quarter to kill until the scheduled 11:35 boarding. As I sat there by the wall with an outlet I noticed a flight attendant come up to the counter and then get on the plane who looked remarkably like Tanya, a member of my church in Columbia. The likeness seemed really remarkable. I had no idea what Tanya’s occupation was or even if she had a job or was a stay-at-home mom.

Later, when we boarded the plane, I kept looking at her to try to distinguish some feature that was different, so that I could be sure that she was only a look-alike. Finally as she was serving drinks, I caught her eye. By then I was almost sure it was not a look-alike but was actually her, even though I had no idea that she had any job at all, let alone a job as a flight attendant, let alone on the airline I was booked on, let alone on the actual plane that I was on.

There was an awkward moment of non-recognition on her face, but then the light came on. Yes, it really was Tanya! What a delightful way to end my vacation! There were empty rows near the back of the plane, so when Tanya was free, she and I sat down in one with my laptop between us; and we chatted and I showed her a bunch of my photos from the trip. Using her privilege as an employee she gave me free food that normally we have to pay for—a huge chocolate chip cookie ($3) and then a Heineken beer ($6). Tanya is such a quiet and unassuming person that it was surprising to see that she has such a people-oriented job. She reluctantly posed as I snapped her photo in the back of the plane. Here she is with such a pretty smile: 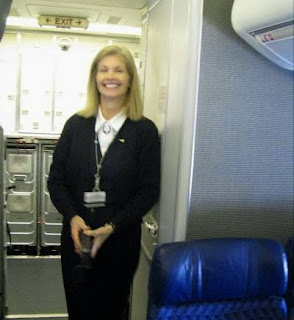 As we approached BWI I had a great view of the Bay Bridge:

I exited the plane and made my way to the baggage claim to find my bags right there circling the carousel. So I was quickly out to the designated exit door where I was to be met by a GO shuttle van. That was at 2:50PM. I had to wait a few minutes, and I called the shuttle company to let them know I was waiting. When the van arrived and picked me up, the driver then had to circle around once and pick up another party destined for the NW side of Ellicott City. We drove there first. The driver then delivered me to my garage door and I was back home in my condo at 4:10PM, full of memories of brash adventure, but happy to be back to the ordinary, at least for a little while.