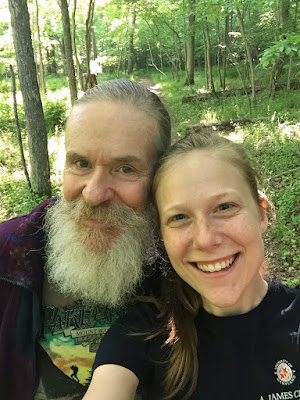 During my recent visit to Maryland I not only hiked a stretch of the C&O Canal Towpath, I also had a chance to do several other day hikes in my old stomping grounds.  Best of all I got to do a four mile hike with my number one daughter.  For years, I've tried to lure my kids into hiking.  Here's a shot my daughter recently unearthed of a hike we took to Hog Rock in Catoctin Mountain Park on October 1994.  Notice that both kids have their hiking sticks. 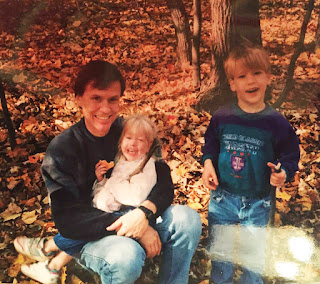 But somehow my influence has never taken hold.  My son has taken up golf--following a little white ball around on grassy 'trails'.  Maybe that counts.  And my daughter explains to me that she loves being out in nature, but she much more prefers being actively engaged with friends and associates in the bustling hubs of civilization.  She reminds me that no man is an island.  I countered that I may not be an island but the peninsula I'm on has a pretty slim connection.


The hike my daughter and I took was in Patapsco Valley State Park.  It was a splendid weather day - cool, sunny, low humidity.  The wood thrushes were serenading us as we traipsed along the river.  But the real magic of the day was the bonding.

Patapsco Valley State Park is heavily 'infested' with a new invasive species from New Zealand called Wavyleaf Basketgrass.  I took several other hikes on my own in equally invaded areas just upstream where a branch of the Patapsco is impounded for a City of Baltimore Water Supply.  The reservoir is called Liberty Lake, and it has a wonderful continuous buffer around it and a network of fire roads that the Watershed management allow the public to use for hiking.  Throughout this preserved area, Wavyleaf has entrenched itself, and because it is a water supply, the options for eradicating it are limited.  Here's one of the fire roads entirely covered with Wavyleaf, with a sprig of it close-up. 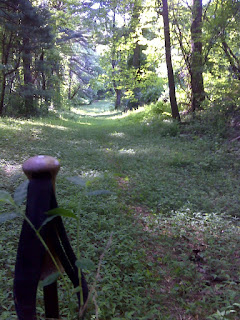 My daughter commented that she thinks it's pretty and she wondered why it was a problem.  I agree that it makes a beautiful ground cover.  The problem, environmentalists say, is that it displaces native species, some of which may become threatened with extinction as a result.  Daughter's reaction: So what if a bird brought the seed over from New Zealand and not man?  What's the difference?  My response:  You're right.  Stronger species naturally overrun the weaker ones all the time.  Humans seem to think that a species has an inherent right to survive.  I disagree.

End of lecture.  Here are a few other shots taken from my Liberty Lake hikes.  Mountain Laurel was in bloom 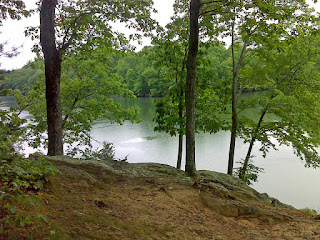 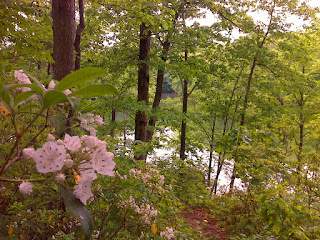 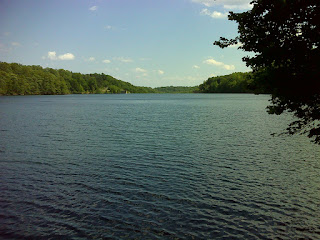 I discovered a set of new trails there built by off-road bikers and blazed with red vertical paint blazes--they even have put bridges in place such as this one made of a steel ladder. 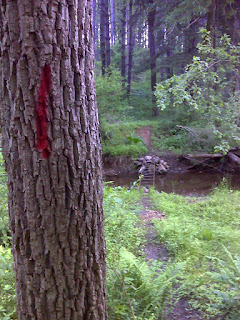 I stopped in at the City of Baltimore Water Supply management office and asked about these trails.  They made my hiking vastly more enjoyable, allowing me to follow shoreline near my former home where I formerly had to bushwhack.  But the office tells me that building trails is not allowed (as I guessed), and if these bikers get caught in the act there would be hell to pay.

Of course, the original reservoir builders, back in the mid-1950's did a bit more damage to the ecosystem of this river valley.  And eventually this man-made lake is going to fill with silt and become nothing but a mucky swamp.  But let's not quibble.

While visiting my parents in nearby PA, I had a chance to hike a cute little 2 1/4 mile trail called the Springlawn trail in Elk Township, Chester County, PA, less than a mile from the MD state line.  The trail follows a former country road along the course of Big Elk Creek.  The wild azaleas were in bloom. 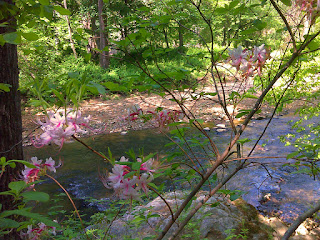 As were the Mayapples. 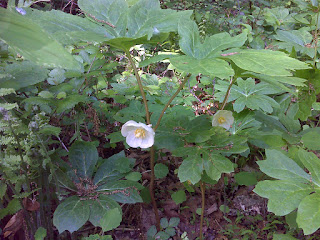 And last but not least I went back to where it all began.  When I gave up twenty-five years as a couch potato in order to get in shape to climb mountains in South America, my go-to training trail was part of the Catoctin Trail in Cunningham Falls State Park near Thurmont, MD.  I chose the piece of trail from the Manor area trailhead up to Bob's Hill because it was the closest mountain to home and it offered 1000 feet of elevation change in a bit over a mile.  I have hiked this trail a hundred times or more, but it had been a couple years since I'd been back.  There's a section of trail where the pink Lady Slippers - a native orchid - line the trail, and I was fortunate to be there during their bloom season. 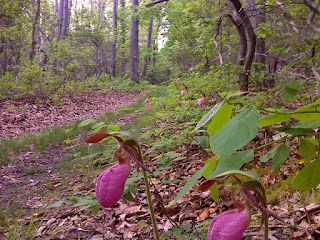 Here's the view to the south east from atop Bob's Hill. 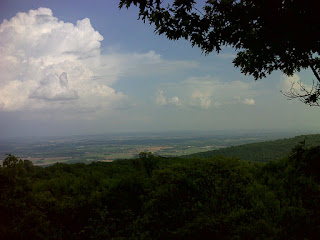 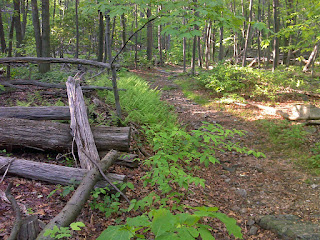 Sure, he may look like a plain ordinary log to you, leaning on another log and not worthy of any notice.  But there's a long story behind 'Bob'.  He's the spirit of this hill, and he was my imaginary hiking companion on all the many grueling training hikes I took up this trail.  Suffice it to say that Bob first caught my attention just after sunrise one August morning when a stunning shaft of sunlight in the otherwise shady woods illuminated Bob's head - the top end of the log - and made it glow like a beacon.

The visit to Maryland lasted a couple of weeks, and though none of the hiking I did was 'epic' in scope, the memories are precious all the same.
Posted by PJ Wetzel at 6:06 AM