This is part 23 of a 31-part posting of my journal entries and photos from one of the greatest experiences of my life so far--a month-long mountain climbing trip to the Atacama Desert area of northern Chile and Argentina, which included summiting three 6000 meter peaks (~20,000 feet).  To view all the entries in this series, check the posts labeled South America.

Despite being at 19,300 feet elevation, I had a very restful night of sleep. It never really cleared up outside. We got a dump of an inch and a half of snow then the moon came out partially but with clouds always around. As a result Damian and Thom cancelled their summit attempt. Weather permitting, we will all make a very early attempt tomorrow, getting up at 2AM and leaving at 3AM to beat any bad afternoon weather.

We got 6 inches or so of snow overall--enough to make the climbing tougher, especially for those breaking the trail (likely to be Thom and Damian) assuming we go. The trip is wearing me down in little ways--one not yet mentioned is chapped/sunburned lips, despite the fact that I use a high SPF lip balm regularly. It has become painful to eat or drink--just another impediment to getting and staying hydrated and fed.

I woke up at 7AM to hear snow falling on the tent. It snowed to about 9:30AM as the sky steadily cleared--no further accumulation. We all got up slowly, had cereal for breakfast around 8:30. After a bit of chat, I returned to my tent and warmed up. The sun was soon hitting us and the best part of the day had commenced around 9:30AM--meaning clearing sky and sunshine. I got up and caught up on my journal and arranged a few things, then at 10:10AM I put on sun screen and wandered over to the giant penitentes field at the head of our little protected valley. You can see it in the backdrop of the photo up top--an endless field of needle spikes, close-up inspection shows that they are huge--some twice my height: 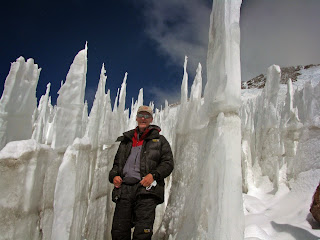 From there I worked my way up hill to the ‘ramp’ that rises from below our camp to the serious slope that we would take between snow fields up the side of Ojos.  Here's the view of our route up. 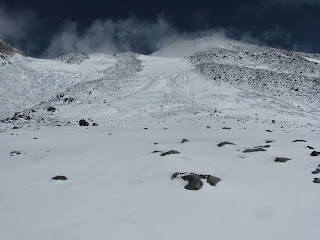 I sat there at almost 6000 meters and enjoyed the late morning calm wind and warm sun for as long as it lasted. I came down about 11AM. Off to the east it had been very dark and threatening all morning; and now that began to move in. It began snowing soon after 11, but only light with sun mixed in. I retreated to my tent. Phinella had just begun heading up hill to the ramp and plateau area as I was coming down. I cleaned myself and changed underpants and rested/napped in the tent, actually getting a bit of restful sleep. It’s clear that my legs need recovery time to perform tomorrow, assuming good weather also.

I got up for lunch at 1PM--good but not enough food as usual. I was craving salty stuff. We had powder soup and sardines (one small can for the four of us) on crackers. We were done at 2PM and I moved to my tent as snow got a little heavier. I napped and got more sleep. Phinella came in and read at about 3PM. I got up and tried to figure out how to convert my watch altimeter to meters from feet with no success. So then I started figuring conversions by hand. My most accurate estimate of the altitude of this camp is 19,350 feet. Ojos is 22,588 feet I believe, so a climb of 3238 feet tomorrow--not too tough if the weather is OK.

I finished the calculations including making a table converting meters to feet (roughly) every 100 meters from here to the Ojos summit. That was done at 4:20PM. Meanwhile the snow had steadily fallen harder and had begun to accumulate, up to an inch. And it was foggy, much like yesterday. There was a very hopeful break in the skies with light snow for about half an hour around 5:30PM as we had a late tea that doubled as the first course for supper. But then the skies really seriously closed in, and it began to snow harder than at any time since the 6” we got at Aguas Vicunas.

We were served supper in our tent by Thom and Damian and at the end, around 7PM Damian announced that any decision about going up Ojos would be delayed as we watched for clearing weather. Phinella and I both waited for a break in the storm before going out to do our business, but the break never came. I went out about 8:20 and got water at the ice encrusted stream. With the weather continuing to be bad, it appears less and less possible to make a summit attempt. By the time I came back in we were approaching six inches of new snow on top of several unmelted inches from previous days. I came in and caught up on record keeping by the light of my headlamp and then settled into my sleeping bag but not into the liner at 8:45. About half an hour later I got in the liner and formally went to bed.
Posted by PJ Wetzel at 5:01 AM