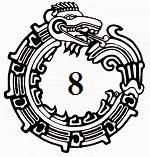 Sin bound me ‘round, though I’ve not bound.  I was not recognized,
But I have seen that All is being dissolved in earth and sky.
—The Gospel of Mary of Magdala, 8:16-17

hey worked far into the night butchering the Ozyump.  The scathing wind ripped at their cloaks.  Ribbons of driven snow ran up inside their spats and gaiters, into their breeches and, when raised by a sudden gust, the sharp grains would bite their cheeks like stinging teeth and swirl into their eyes.

Two of the three sleds were already piled to capacity with bold slabs of flesh and blubber, each piece so heavy that one man could not lift it.  Haste was driving them, out of fear that more Ozyumps were coming.

Adam and Sam worked together trying to free a thigh bone from the hip.  It would be full of rich marrow—enough in this one bone to feed a person for an Order.  Sam suddenly paused and looked up at Adam.  There was a glint of mischief in his eye.

“I’ve been trying to puzzle it out.  And it just now hit me.  While we were racing, you called me stupid and told me to shut up.  Ads, that was completely out of character—the lamest thing you’ve ever said to me since you were two Ides old.  But the thrush … You were answering the Spirits, weren’t you.  They were telling you fairly tales too.”

“Exactly.”  Adam’s heart lit up.  Sam’s empathy was such a blessing.  “The Ancestors are on some new jag.  They were laying odds on whether this monster …” he kicked at the carcass with his three left claws “… was going to eat me or whether it would answer to some mysterious new spirit.  The spirit was goading me—trying to tell me I was a great king.  Talk about a fairy tale.”

“A king you could be, Adam,” Siephus said, and there was no jest in his tone, “you have brought great wealth to clan BrownEarth today.  All of Saskatoone will honor you.  Who would deny you as you strode through town tossing meat to the children?”

“Nor would they deny your virgin birth,” Uncle Abe added, “as duly recorded by the Keeper and verified by the midwives.  I know you are weary of hearing these words.  I understand that you view your family’s encouragement to be little better than the coercion the Citadel tries to wield.  But you also know full well that the first Six Shepherds of Mankind’s Sojourn were all Immaculate, and that humanity desperately awaits the Seventh ere the enemy crushes the last of our Capitals.”

“Uncle Abe, you are a devout man,” Adam sighed.  He loved his uncle with all his being.  If anyone in Saskatoone should be named Keeper of Faith and Tally, it was him.  “I’d rather dispense the meat in your name, sir.   If we must revisit this debate, I will make my answer brief.  There is the matter of the man Trilly will not name who tried to rape her at the time of her vision, and of my conception.  Most of all there is Lissa.  She is Immaculate if I am.  She is first born, not I; and above all it is Lissa, not I, who is lowliest of the downtrodden.  Last shall be first, the scriptures say.  Name her Seventh Shepherd and I will fall to my knees before her and become a religious man.  Elsewise …”

“A woman may be a Shepherd,” Siephus was quick to answer, “Learned men still debate whether the First might have been Mary Magdalene rather than Jesus of Nazareth.  Most scholars now believe that the ten-thousandth Dalai Lama, Maria Therese de la Bouguereau Rinpoche, and not Athelstan of Taizé was the true Fourth Shepherd and that he was her disciple.  So when the Seventh emerges, an argument of symmetry would contend for another female messiah.  Man or woman may be Shepherd, but only a man can be a King.  And the prophecy specifically says ‘Daughter of greenth … pray name thy King’.”

“So the Keeper names Lissa ‘Green’ and voila—prophecy fulfilled at the stroke of a bureaucrat’s pen.  All too tidy and contrived.” Adam threw up his hands and turned away before containing his anger, “Father, forgive my outburst.  But it only serves to show that I am not tempered as a King must be.  I am barely seventeen, trothed to no woman, only a twig on our family tree. I loathe scheming and politics beyond speaking, having helped the Citadel wield power ruthlessly in my innocence.  I will never accept a role as leader.  I would rather die than delve hidden knowledge to manipulate another man’s loyalty.  I would gladly surrender my gift-curse for but a single bite of this liver,” he pointed to the steaming brown-red slab on his sled, “and consider myself better off in the trade.  I’ve said these things many times before, and only confirm them now because the Spirits are singing some new song.  Answer me this:  If a man who was not known to you proclaimed that voices in his head had anointed him king of the world, would you believe him?  If, on that imagined authority, he demanded your fealty, would you bow to him?”

“My son’s authority is not imagined.  It springs from readings that do not fail to prove true.  My son has slain an Ozyump.”

“The readings come from a palsied girl and her wooden dolls, and the truth of them is imagined—a selective judgment, exaggerated and befogged by love or greed.  Father, I am a man plagued by demons and if I don’t trust their counsel, why should anyone else?  With the Ozyump, I attacked the only part of it that I could reach, and I got lucky.  For Gods’ sake, do you think I sought out this monster in order to prove some divine authority?  Should I go out looking for more?”  Adam turned.  He was so weary of this debate.  He desperately wanted to escape it.  “My sister is hungry and needs to sit on the pot.  I will return.”  He severed a small portion of liver for her and headed down the tunnel, not waiting for a response.

It was a good excuse to get away from them, and it was not contrived.  Adam had a duty to care for Lissa and to feed her from his worker’s rations.  She was not a productive citizen, and therefore not a citizen at all by the law of the Citadel.  The Keeper stripped her of the family’s trade name, gave her a beggar’s name—Lissa Green—and judged her as condemned by the Gods.  She had been a blue baby, born with a knot in her umbilical.  She could not speak or bond at birth, so it was a miracle that they had not simply cast her into the river on the day she was born.  Perhaps it was because Marchioness Drusilla LordBishop saw a chance to exploit prophecy and, by association, increase her stature.

Meanwhile Adam, who was second to emerge from the womb, knew blessed little about politics.  With his limited birth-words, his plea came purely from the heart.  Even as he engaged in the necessary bonding rituals with Trilly, he begged the midwives to speak the proper words to his sister, to give her a name, and to lift her up even though she couldn’t execute her part in the litany.  Adam had shared the womb with this girl.  He understood her worth.  He bawled and squealed and reached for her, demanded that she be put to a teat, insisted that the midwives help her to suckle.  And somehow she had lived.  The Gods had decreed it.  If they hadn’t, Adam would have followed her into death—indeed he would have begged the Spirits to grant him that mercy.  For without her to mediate, he could not endure their harangue.  He knew it was Lissa who the Gods favored, and that it was he who was rightfully condemned.

Secretly Adam even blamed himself for tangling her unbilical, but that was the one secret he did not share with her.

“Air-bella.  Air-bella, Addie.”  She was repeating these nonsense words over and over as he fed her, took her to do her business, and then settled her back among her furs and her scattered nesting dolls.  There were seventeen of them, each painted with the likeness of a peasant woman on a background of glacier, snowflakes and stars.  Before Adam left to return to the butchering, he gathered them and began ordering them in front of her, so that she could start a new game.

“What is Air-bella?  What else have the dolls revealed, sweetheart?” he asked her.  “Sam explained the riddle of the thrush.  Who should I ask about this Bella of the Air’?  Can you find an Ancestor who will explain?”

Haltingly Lissa reached for the second smallest of the dolls—the one that encased the only solid, indivisible one.  “Mama.”  Her eyes were sharp, urgent, as she held the doll before his gaze.

“Then I will ask Mama when we come home,” Adam reached to give her a farewell hug but she turned stiff.  Her head was moving in the peculiar elliptical motion that signified ‘no.’ Suddenly, impetuously, she let the doll drop.