Jacksonville, North Carolina is the city the Marines built.  It's dominated by the huge Camp Lejeune and adjacent New River Marine Corps Air Station.  Rush hour in Jacksonville concentrates traffic at the two Main Gate entrances to these two facilities.  The economy is robust and stable, yet I've never seen so many single-wide rental trailer parks anywhere else in the country.  The rank-and-file soldiers that make up the base of the military pyramid are itinerant, short-timers.  So like any government town (Washington, DC is the other example I'm intimately familiar with), there's no sense of permanence.

But for the hiker, Camp Lejeune has provided half the land, and probably a lot of the resources, either directly or indirectly, to allow the construction of Jacksonville's magnificent 6.4 mile Rails-to-Trails Greenway. 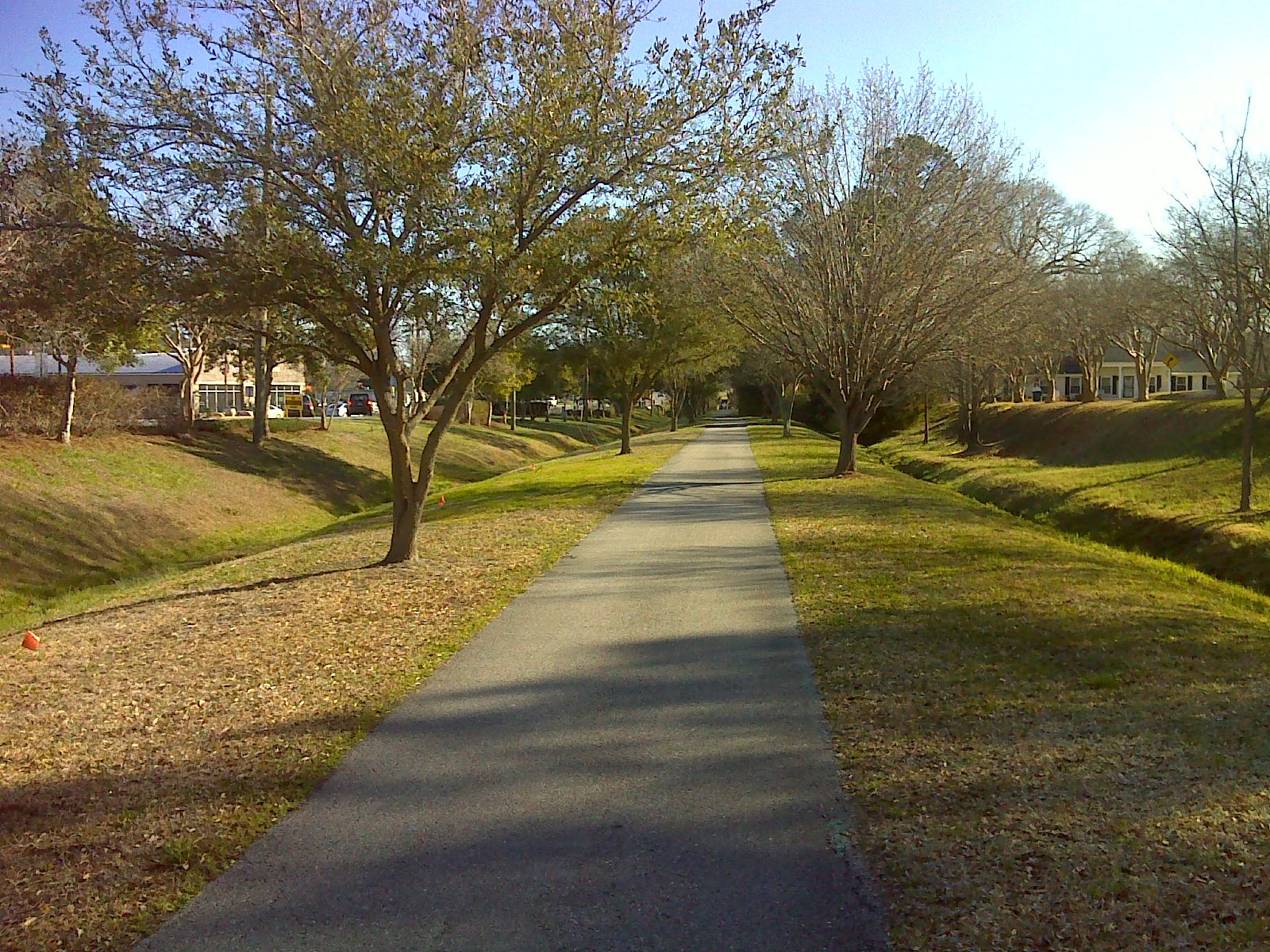 It's paved, wide, smooth, and for much of its length it's corridor is wide enough to feel like a walk in the woods.  For me the centerpiece is this aesthetically pleasing three-span dedicated footbridge over 6-lane NC Highway 24: 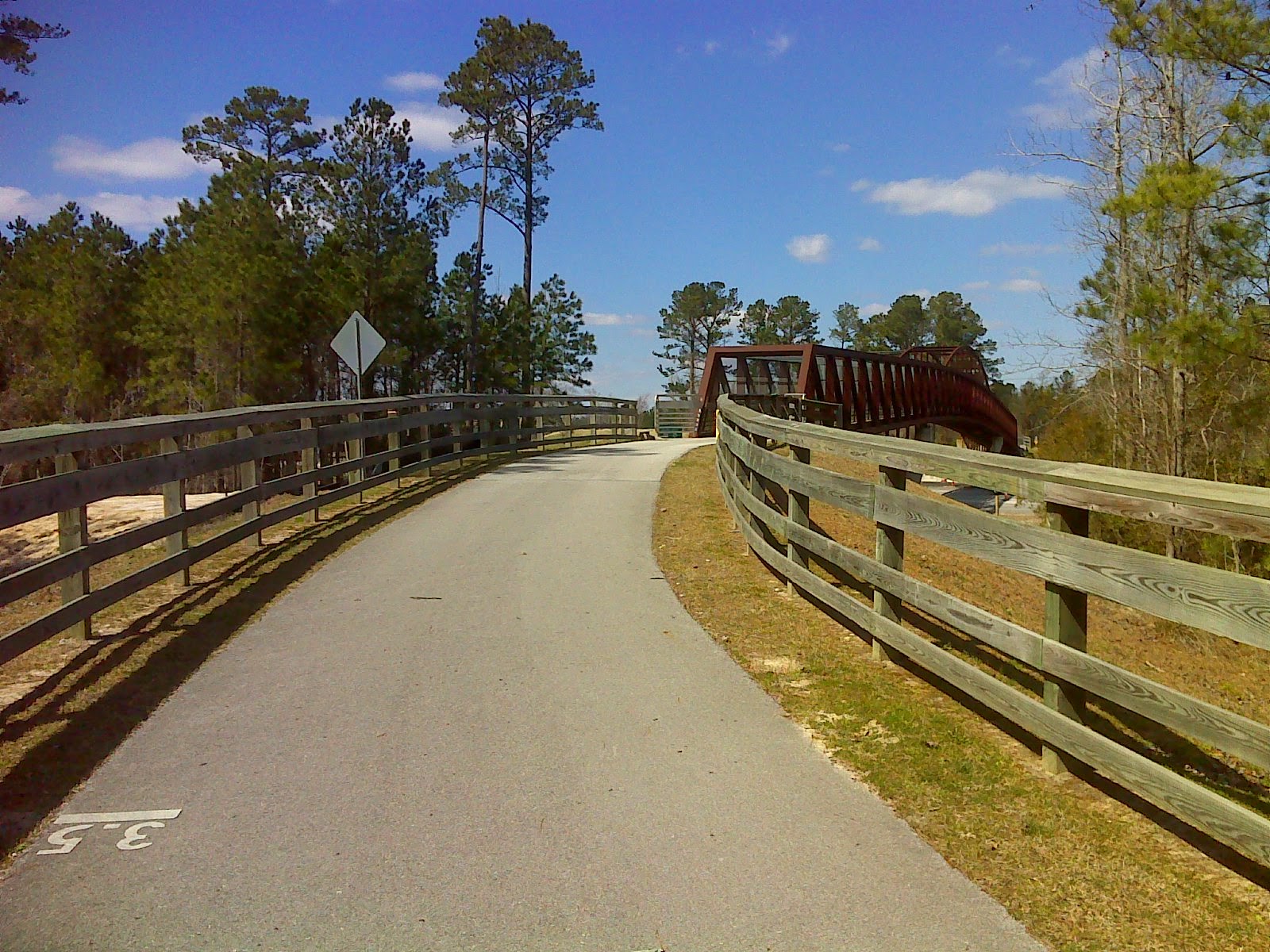 It's such a delight to my eye that I had to share another view. 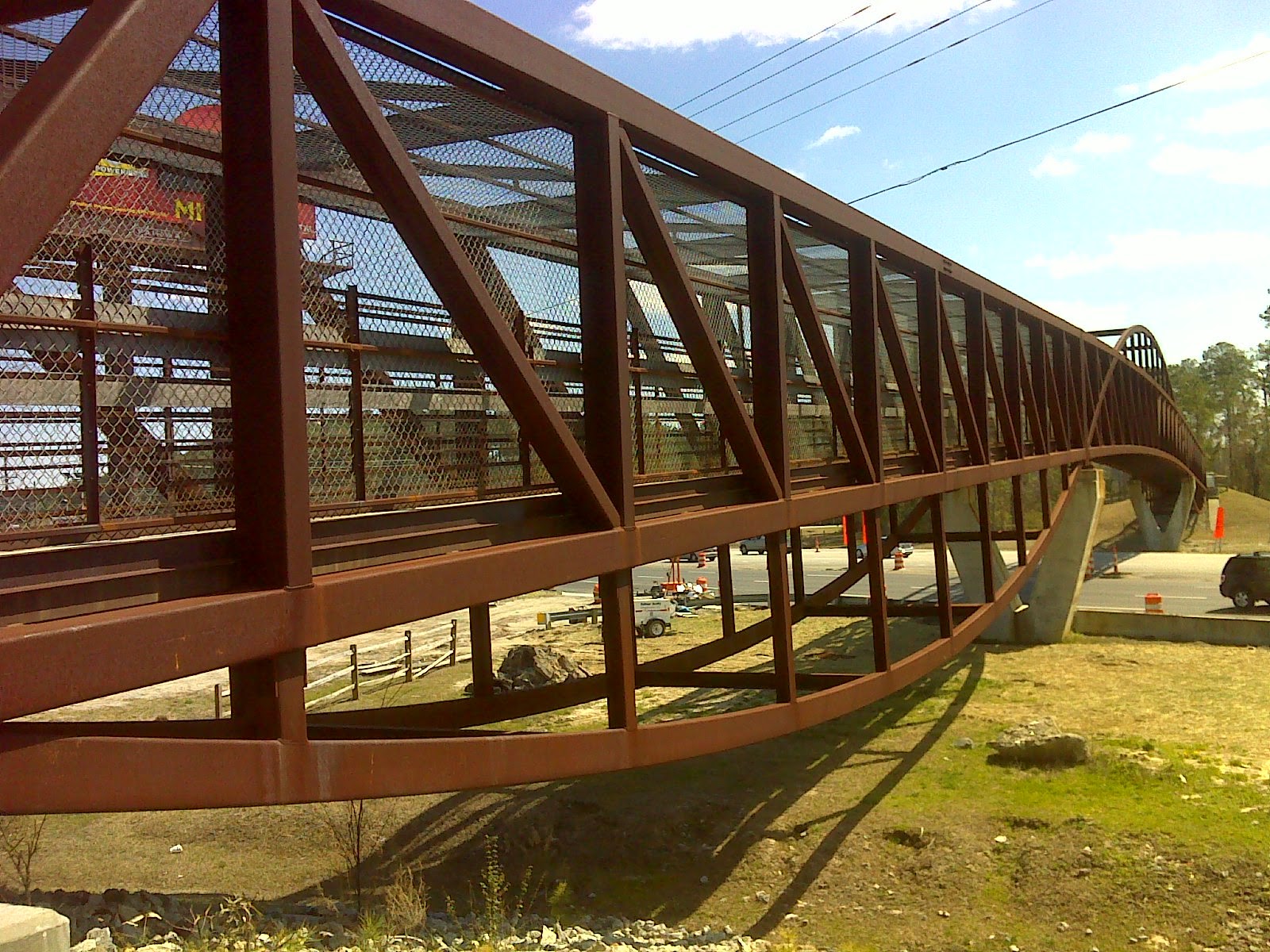 As apparent from the first bridge photo, the route is posted every half mile with these nearly indestructible mile markers - the one below is part of the long walk right beside the Camp Lejeune chain link fence on property they donated/dedicated to the trail: 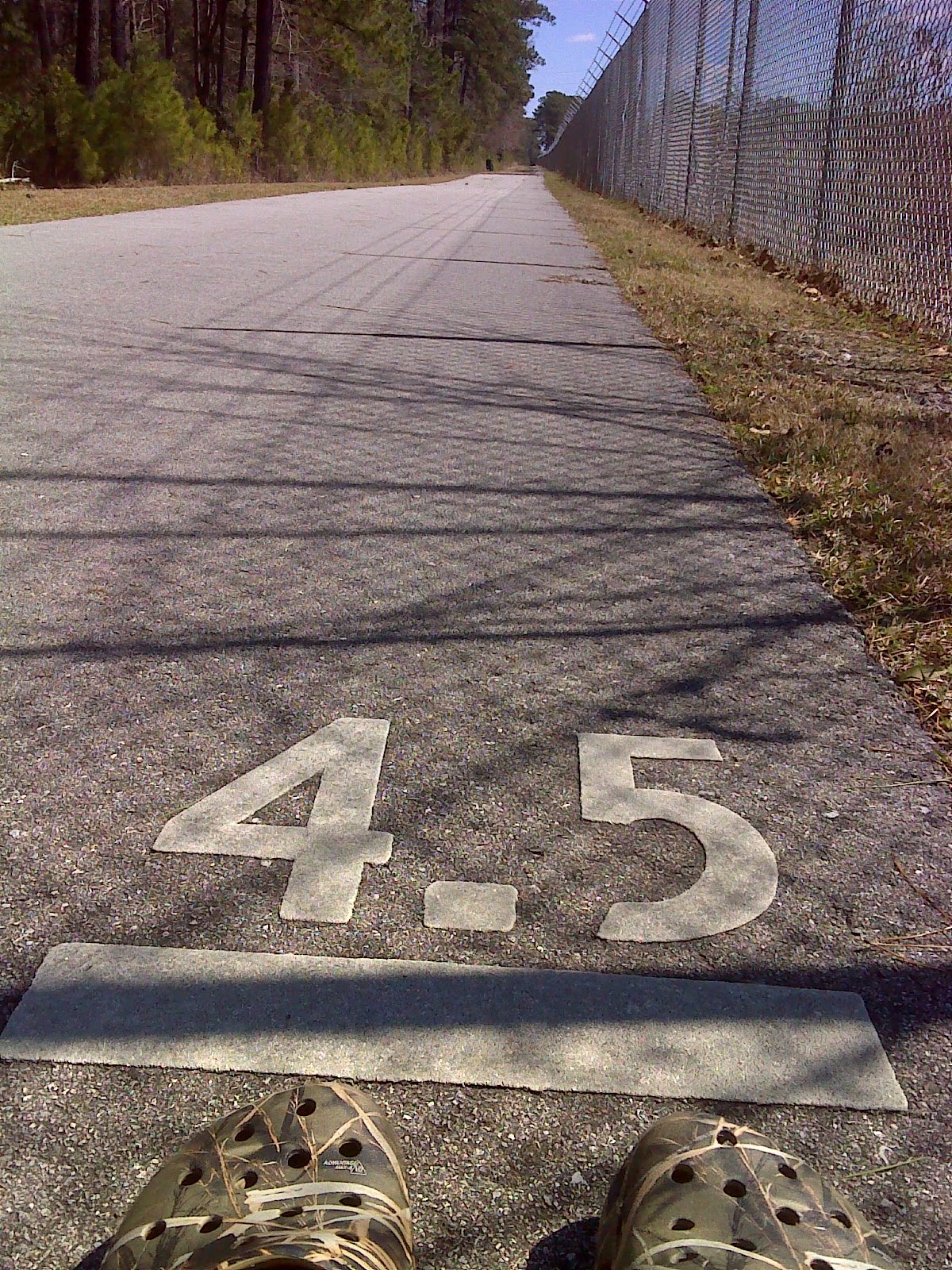 The footpath also has its own bridge over Northeast Creek. 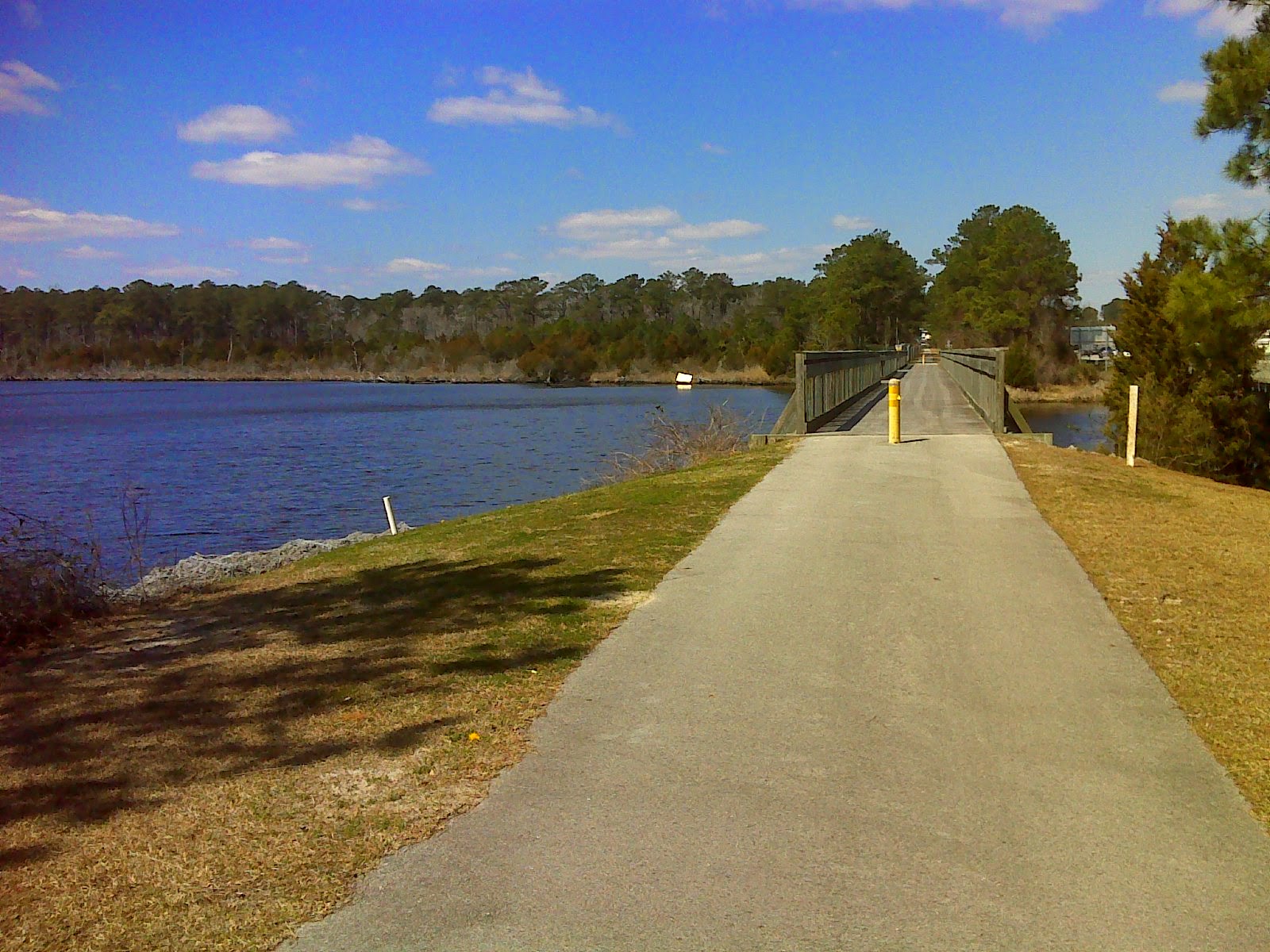 The route starts in Downtown, just beyond the Old Bridge over the New River (view shown up top), right after you pass the front door of the courthouse,


And it ends at the Camp Lejeune Main Gate. 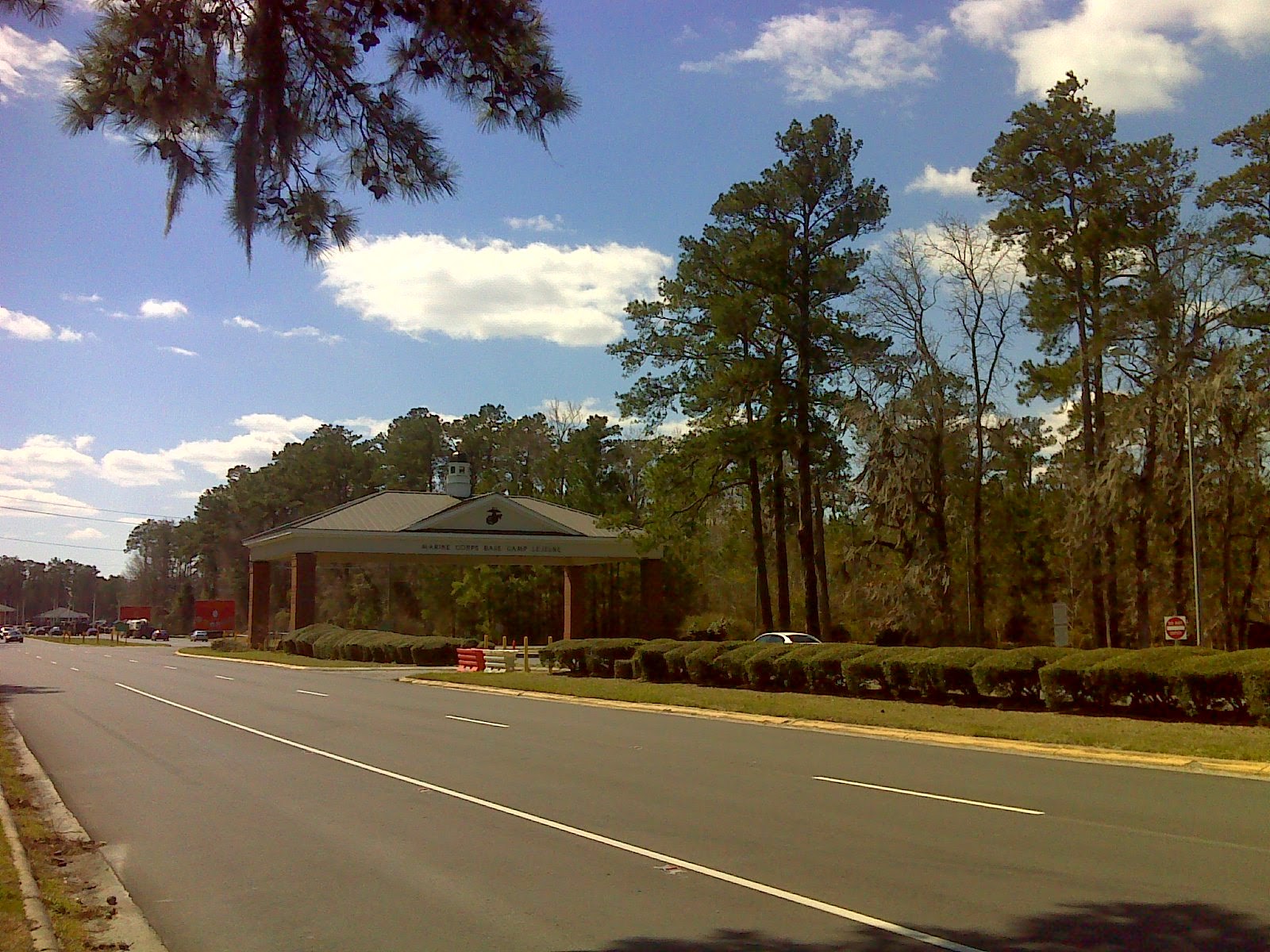 On either side of the Greenway there was some road walking on grassy shoulders ... 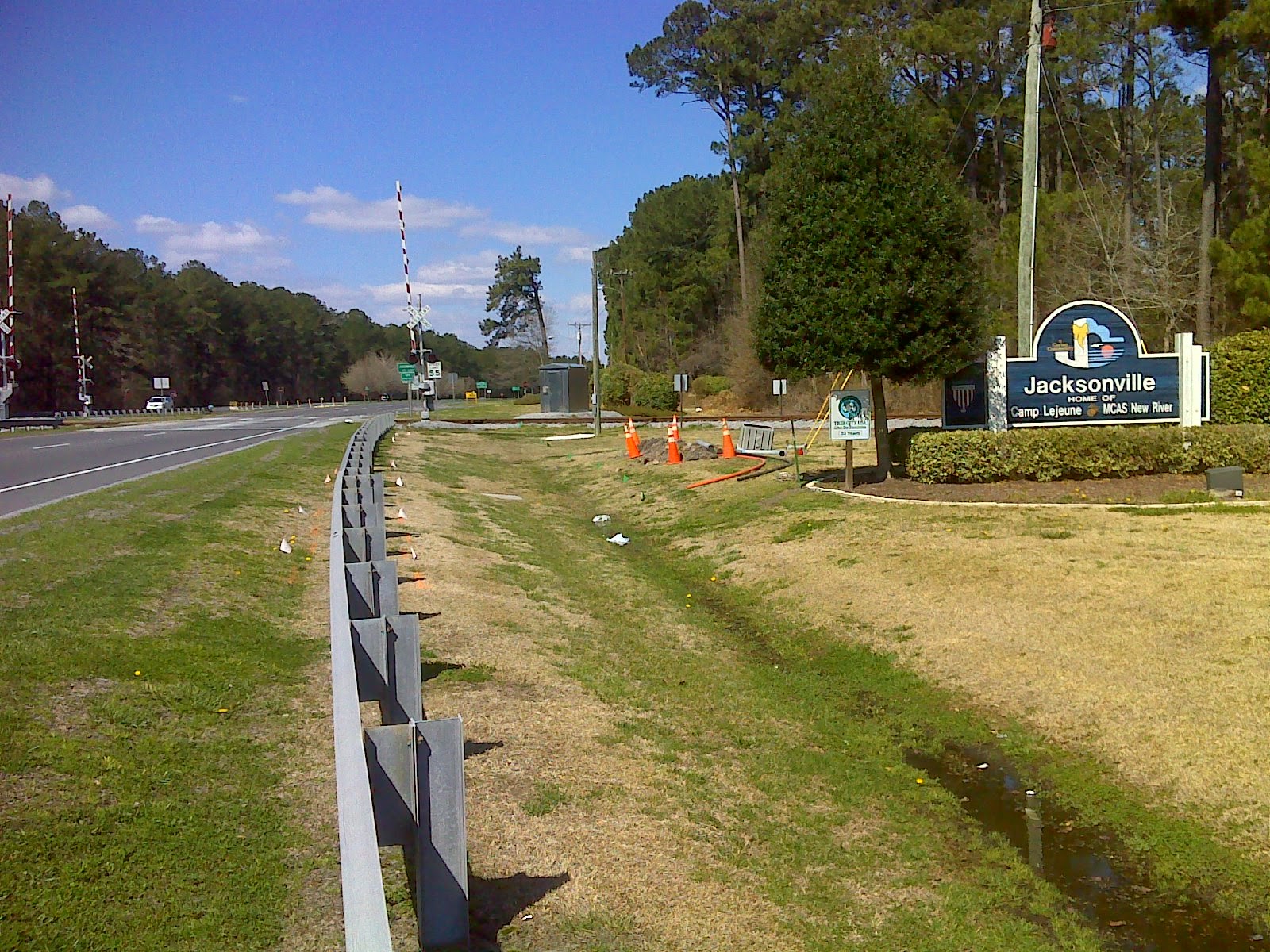 on sidewalks and frontage roads (with some rather peculiar friends) ... 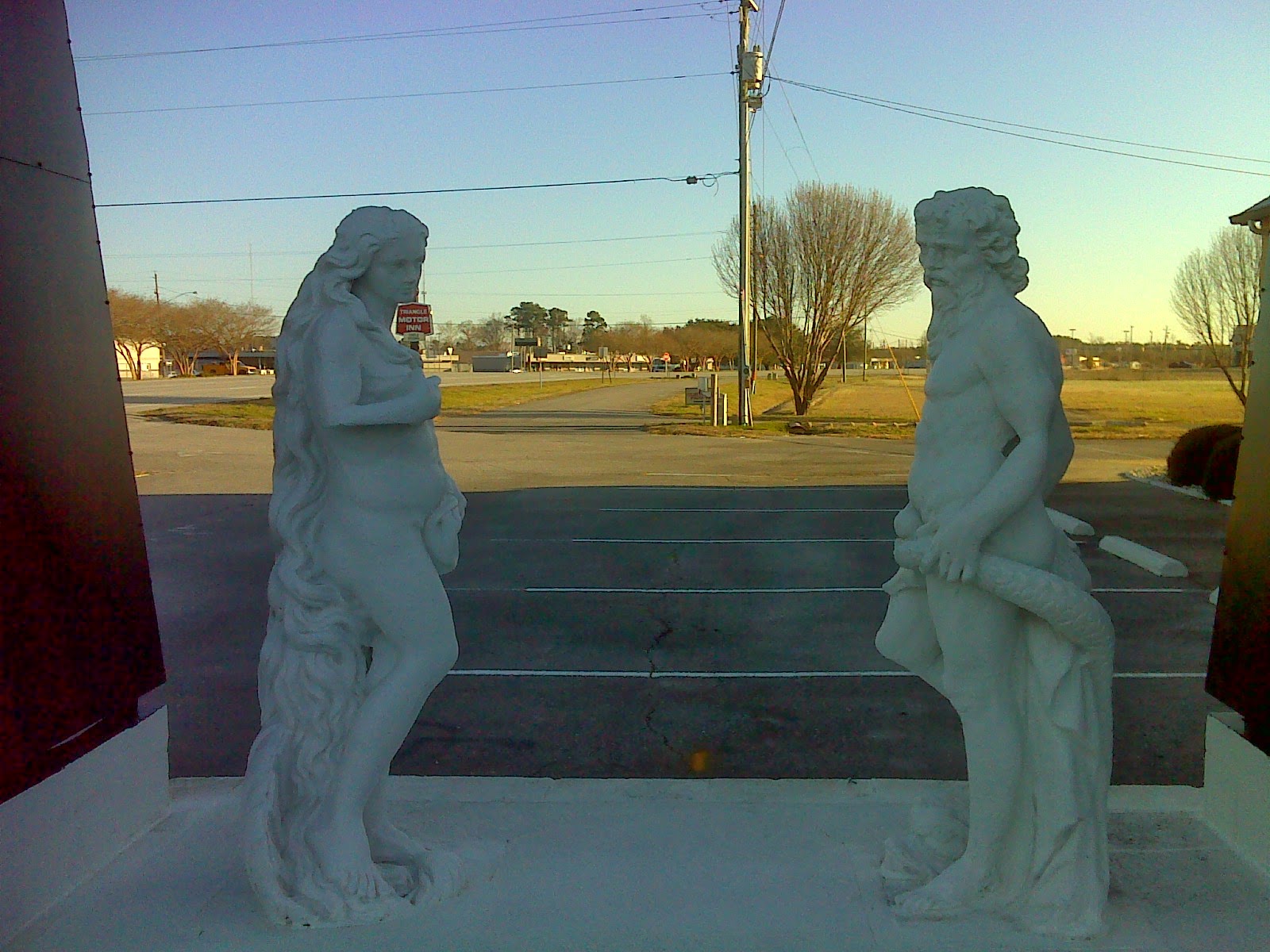 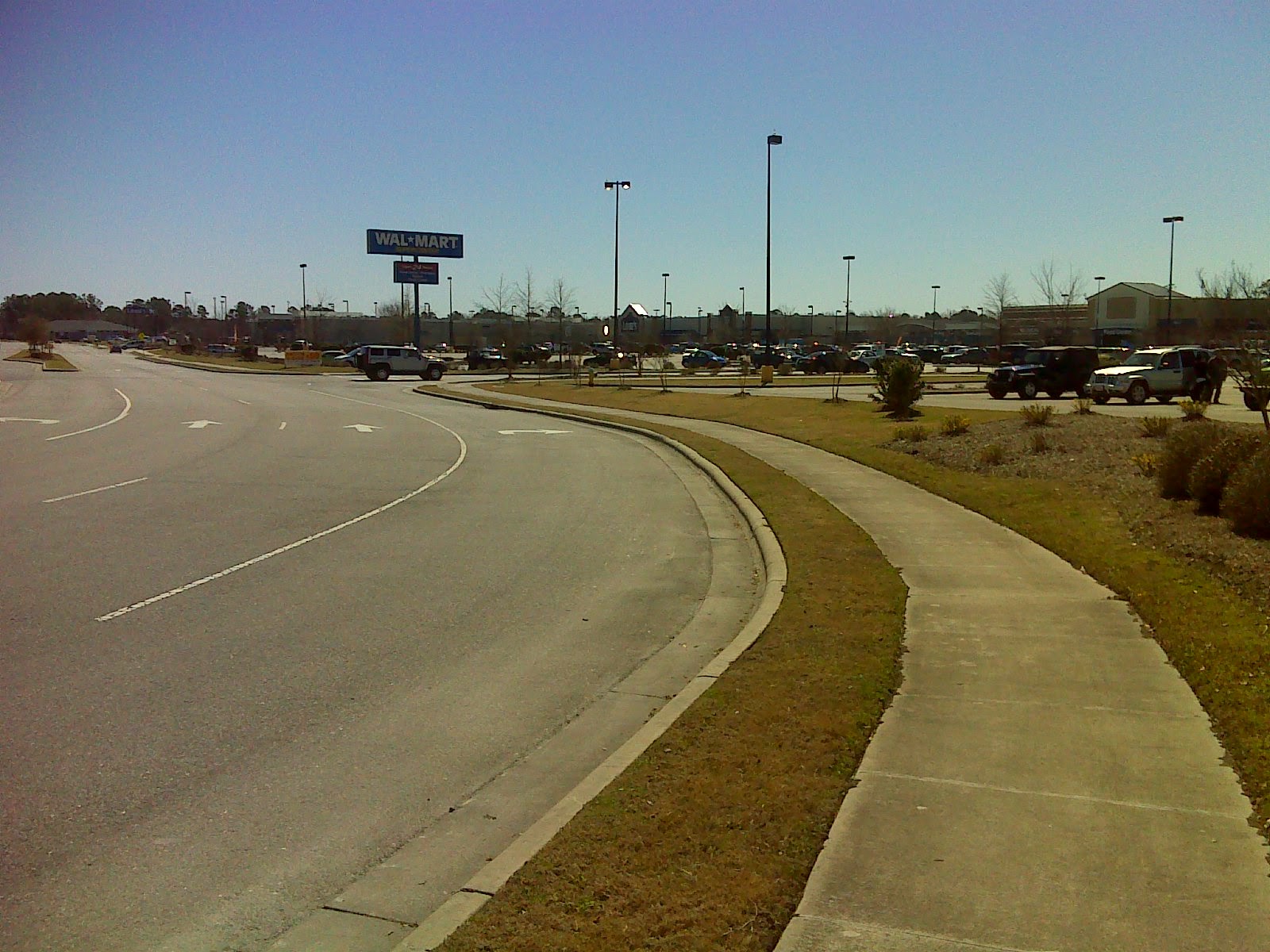 ... and on lightly traveled residential streets. 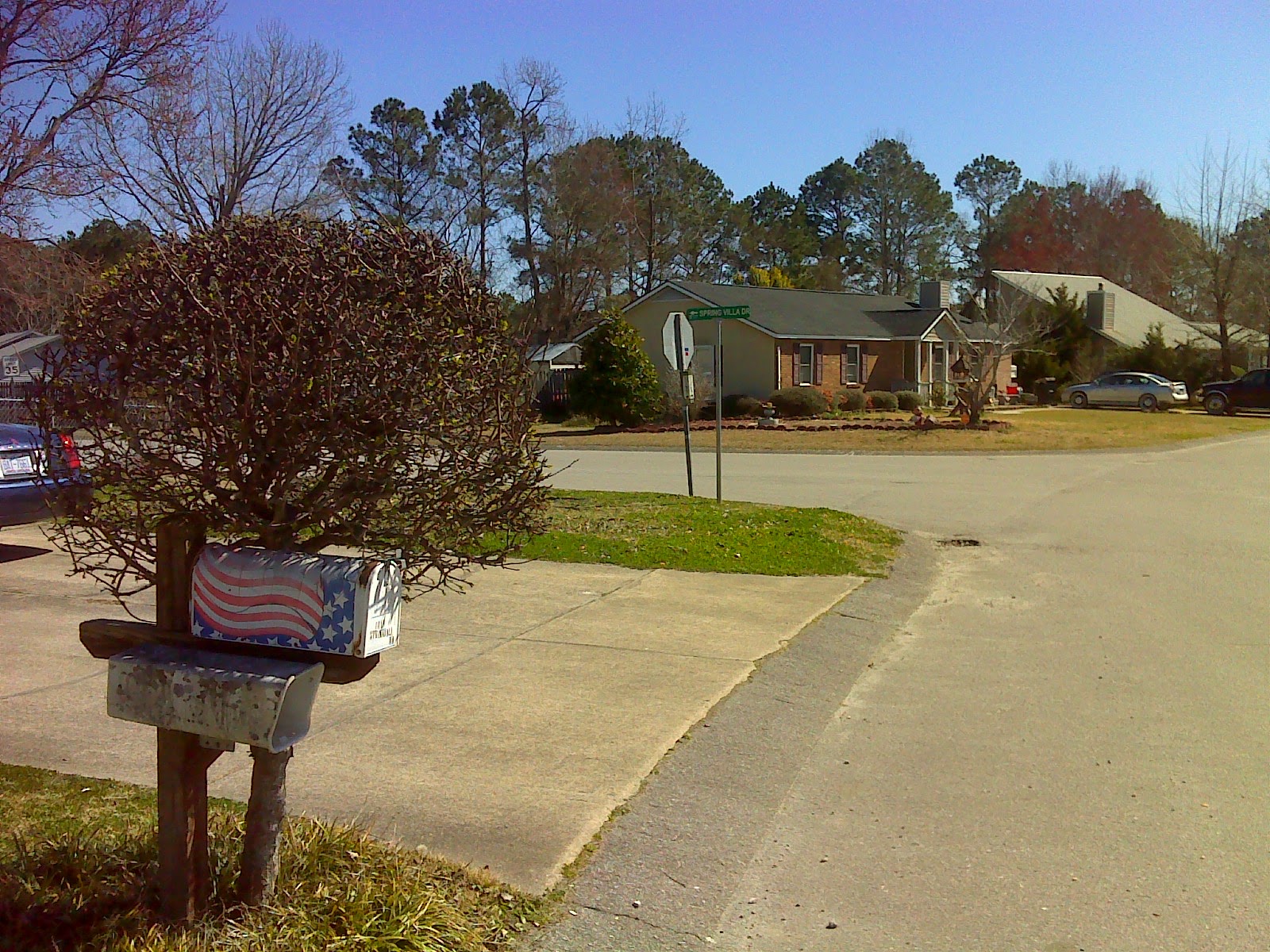 All in all, I had a delightful two days of hiking to traverse this coastal NC city.  And in the end, as I left the west side of town, I guess it was inevitable ... I've always known that sooner or later I'd end up here. 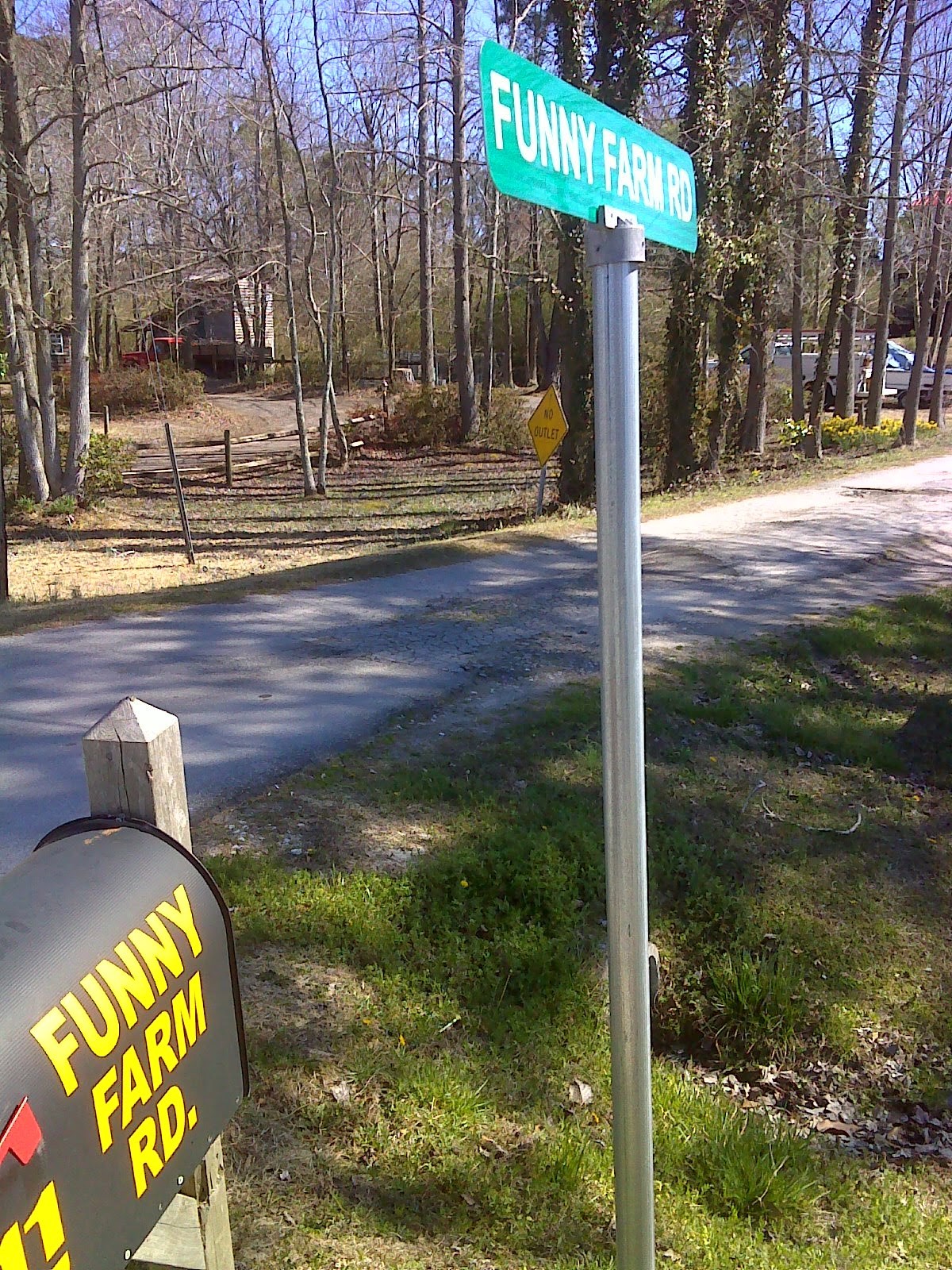 Below is a map of the route through Jacksonville and environs.  The link in the title will send you to a slide show with lots of photos.  I took a photo at every intersection, and there were a lot of them, so they may seem tedious and repetitive.  The point was to document each turn, and the geo-tagged photos serve as enhanced waypoints.  This is for any future hiker who wishes to use the info provided.