The North Carolina Mountains-to-Sea Trail follows the famous Outer Banks from Nags Head south.  Normally the trail follows the beach.  But when the beach ends, as it does at Oregon Inlet and further south at Hatteras Inlet, you have to find a way across the water.

But at Oregon Inlet they built a bridge in 1963.  It's 2 1/2 miles long, has a very narrow shoulder (okay, not really any shoulder at all) and you're supposed to walk it.

That's what I did today.  I wasn't looking forward to it, but it had to be done.  Not only did I have to walk it, but in my self-supporting way of doing the trail I had to bicycle back across it to retrieve my van.

There was good news, bad news, and worse news.

Good first: traffic on this cold off-season Sunday was light, and there were virtually no trucks whizzing by to suck me into their wake and blow me off the bridge or sideswipe me silly or leave me as a damp puddle in the road.

Bad news: this cold off-season Sunday was *really* cold.  Temperature in the low 40's with 15mph winds up on the exposed bridge.  Okay, cold by NC standards.  I understand if those of you up north enduring subzero Arctic conditions think I'm being a wuss.

Worse news.  Apparently the locals driving the bridge thought I was some sort of crackpot.  They called the park rangers, the State Police, and who knows how many other law enforcement authorities.  I wasn't half a mile out on the bridge before a Park Ranger and a State Trooper pulled up, each in their separate vehicles, lights flashing, stopped me, and asked about my welfare.

You've probably passed such a scene while driving our nation's roads.  Multiple cop cars confronting some wanted criminal fleeing an ignominious crime scene.  I was unquestionably a violator of the civil order, and in need of immediate correction.

Of course I wasn't doing anything wrong.  I told them about the MST.  They knew about it.  We chatted for a while and they were actually quite interested in my hiking adventure.  They cautioned me to be careful, asked if I was dressed warmly enough (I was, but barely), and then they wished me well.

Okay - end of the drama.  An hour later I was safely on the south side of the bridge, no worse for the wear.  Biking back across with a tailwind went quickly, but I found myself gripping the handlebars as the winds buffeted me dangerously while I climbed the high span.  Hours later my hands are still sore.

I hiked a total of 10.4 miles of Mountains-to-Sea Trail today - the rest of it on the beach.  I passed Bodie Island Lighthouse, but it's about a mile inland, so the beach hiker only gets a glimpse.  That's where my van came in handy - took the side trip to get a close-up look. 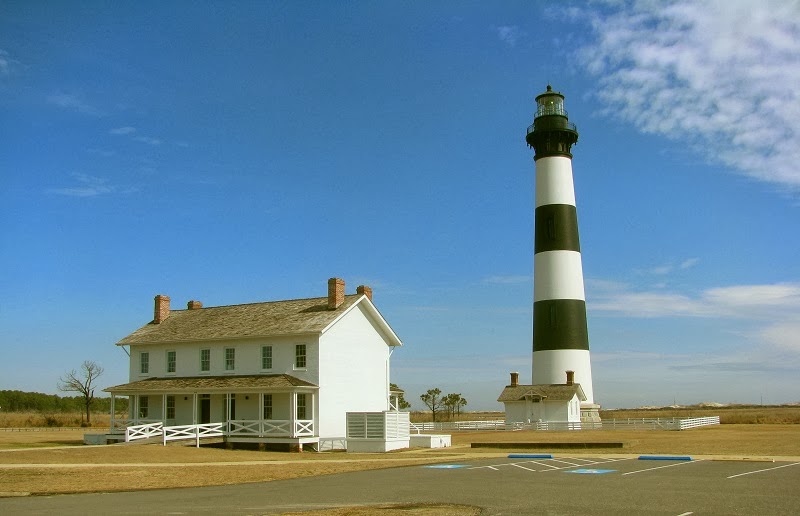 Some of you may have heard about the extreme beach erosion along south Nags Head.  In one small section I had to dodge behind condemned houses perching precariously on the beach. 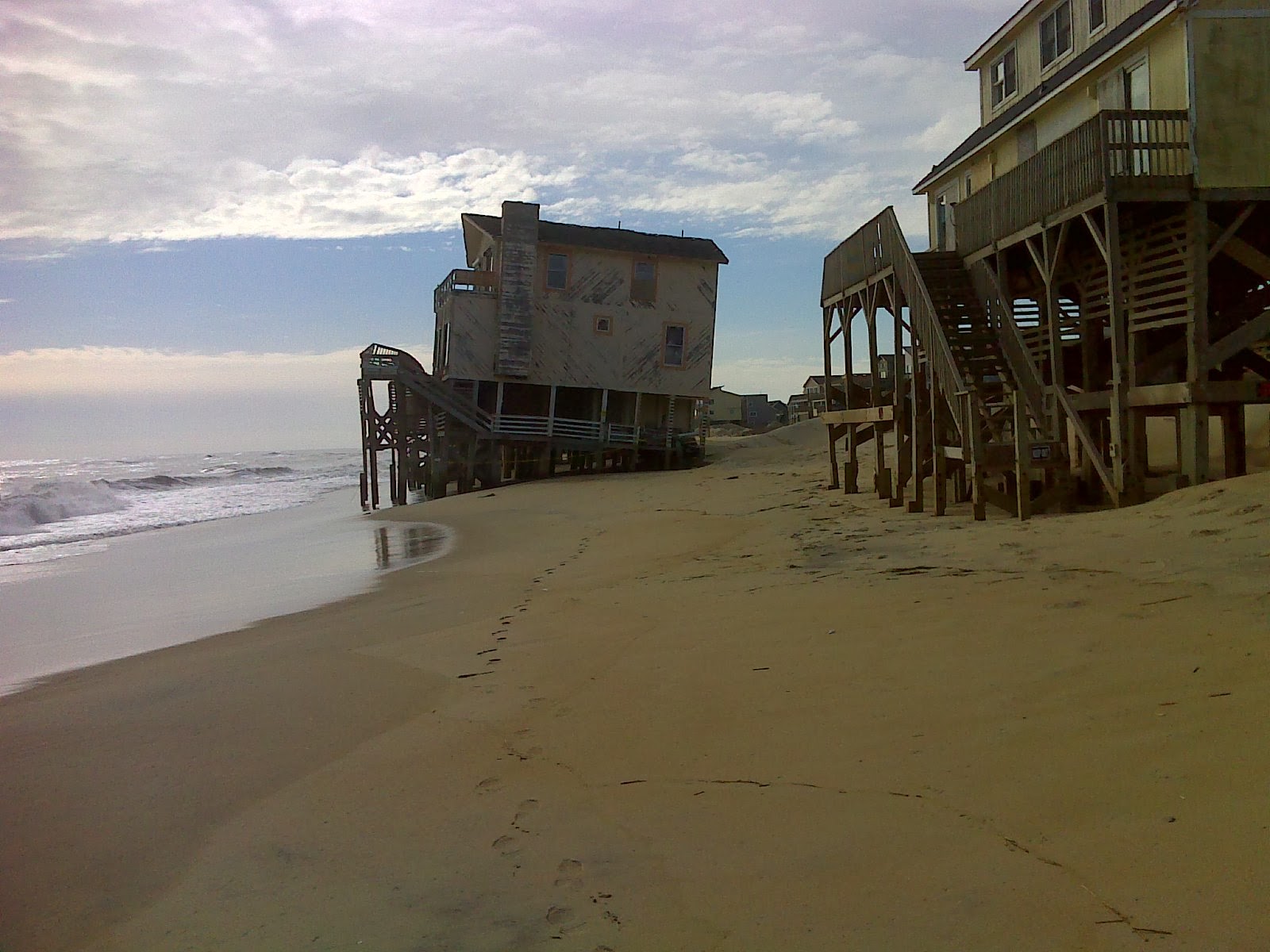 The only other beach landmark today was the ramshackle Outer Banks Fishing Pier - within sight of the ritzy Jennette's Pier that I showed you in yesterday's report.  The contrast could not be more stark. 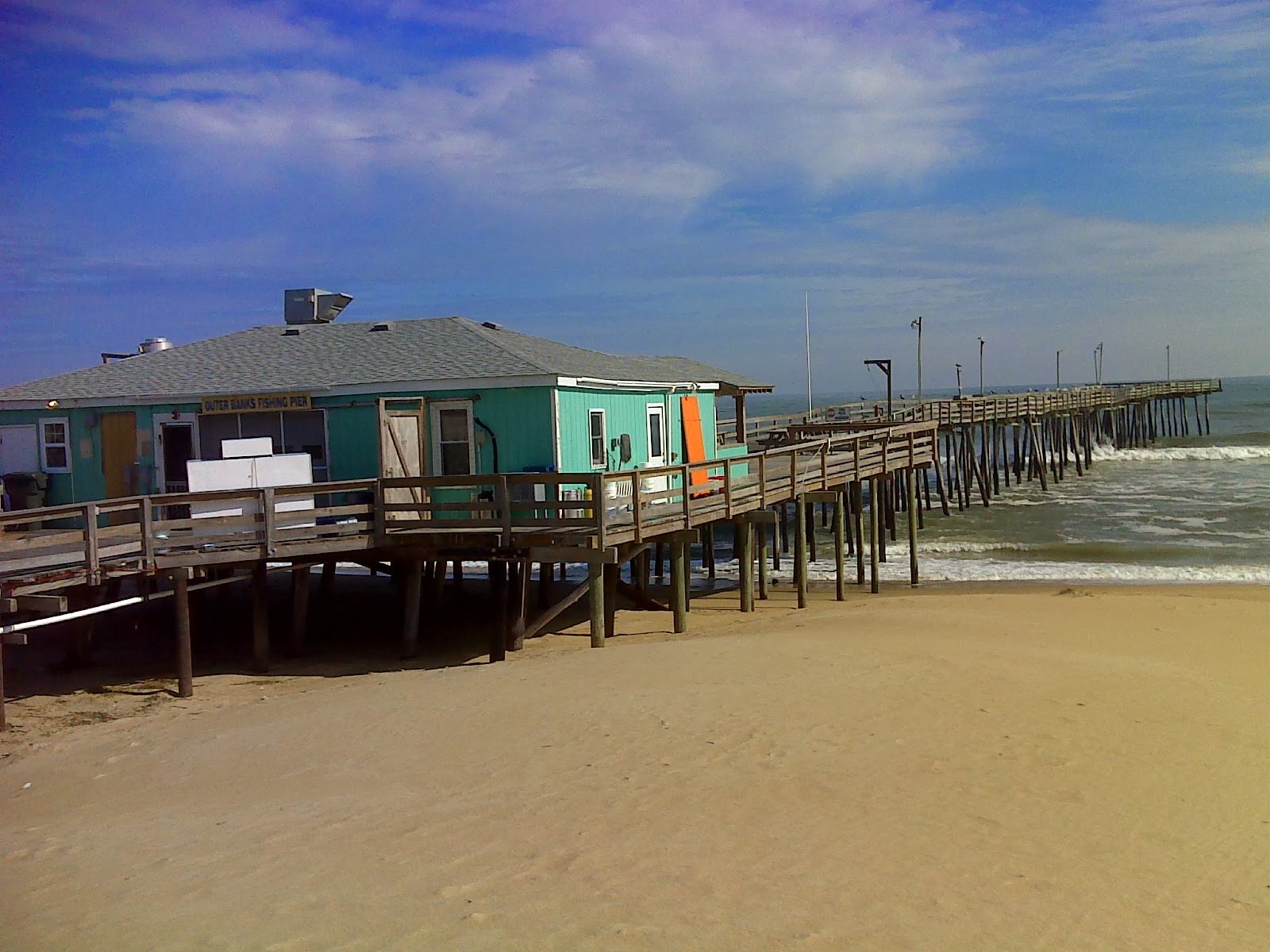 So with nerves a little frayed, I settled into a motel for the night and had a beer and just relaxed for a while, basking in a sense of pride and relief at having successfully walked on the water.

Here's a map of the day's hike with the link to a few more photos: