They say trouble comes in threes.  Since 'they' say so, it must be true.  So I'll try to fit today's story into that theme.

Trouble number one: Stranded 8 miles from my van and finding that my bicycle's front tire was going flat. 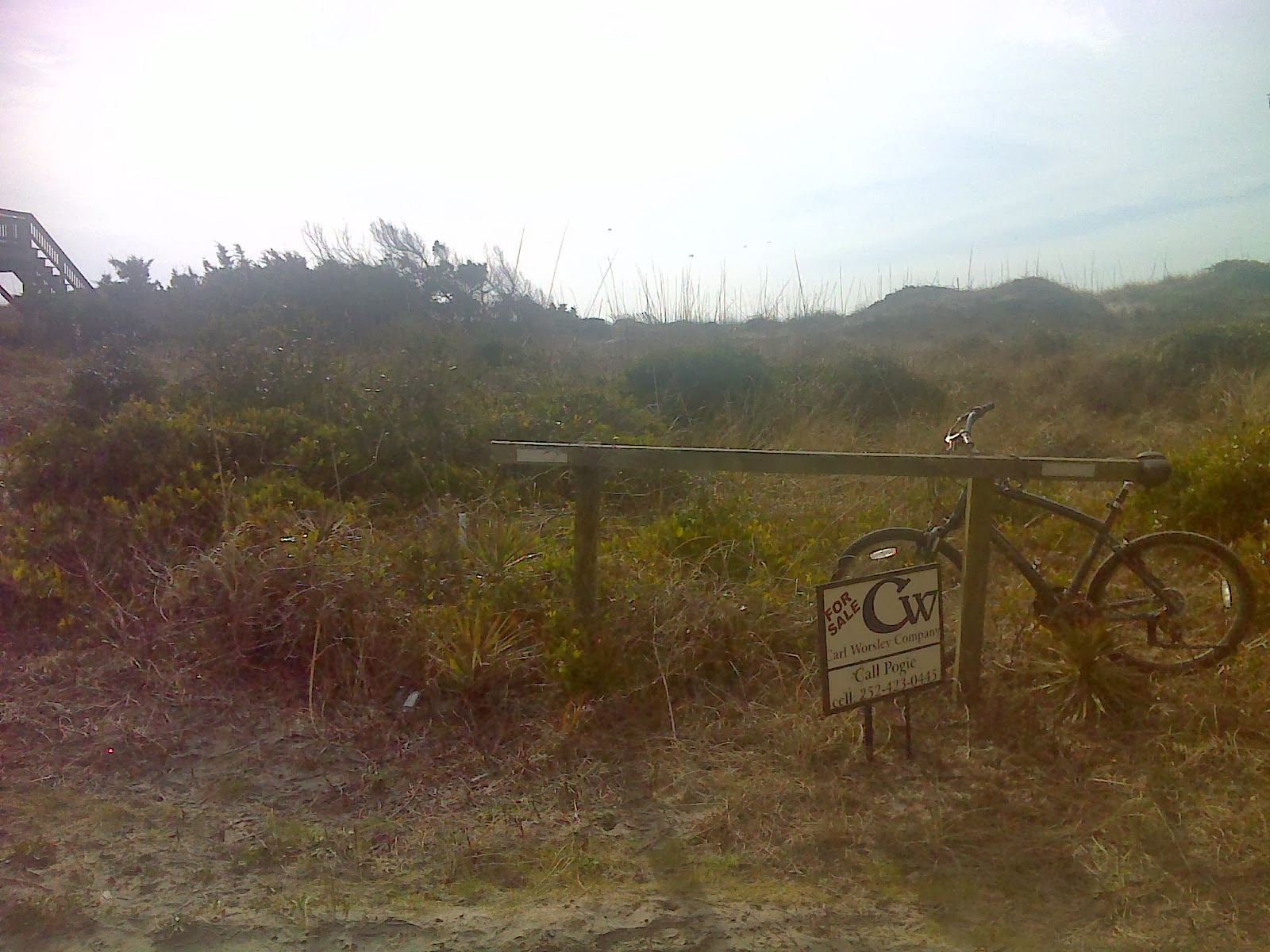 I don't usually dwell on the logistics of my self-supported hike, but today it became part of the story.  I started out this morning by stowing my bike at the official MST dune crossing point, used to get from the beach to the Hatteras ferry landing.

An aside: as you can see from the 'for sale' sign, this access seems to be across a private undeveloped lot.  It's 'official' because it's the route shown on the Friends of the Mountains-to-Sea Trail's online interactive map. There is a public access point on National Park property near the Ferry Landing, but it's a little further down the beach, so perhaps a half mile more hiking.  I suspect that that will (or ought to) be the official trail route in the future.  Here's an annotated screen shot of the interactive map, showing the situation graphically:


But now back to the story..  After stowing the bike and taking a GPS waypoint so I could locate this crossing sight-unseen from the beach, (dune crossing shown at left) I drove back to the NPS Frisco campground, parked my van and resumed the hike where I left off yesterday.  I hurried down that last 5.6 miles of beach walking on Hatteras Island - passing the storm damaged and now abandoned Frisco Fishing Pier (photo below) in order to get back to my bike in time to catch the 10AM ferry to Ocracoke, and I made it on time.  Having not yet discovered the flat tire on my bike I was now confronted with Trouble number Two: no 10AM ferry.


The official published NC-Ferry system on-line schedule (as I had accessed it just a few days ago) showed that there was a 10AM ferry.  The change had been posted only on the Ferry System home page.  When you're searching for 'NC Ferry Schedule' you bypass the home page.  Ironically, they've now changed the schedule page, so I have no 'proof' that the mistake was theirs and not mine.  No big deal - I'll take the hit.

So ... I had no boat to ride.  The new schedule was an emergency change because dredging was needed in the normal channel they use, so there was a temporary reroute across the inlet that adds 15 minutes to the crossing.

If I wanted to continue my 'hike' on the ferry, I would have to take the 11AM boat.  And with the round trip taking two hours I wouldn't be back to Hatteras Island until after potential Trouble number Three: a Severe Storm watch (which turned into a Tornado watch) for the afternoon,  I wanted to get across to Ocracoke Island, hike just a short little piece of road walk out to the beach, and then return on the next ferry and bike back to my van before the storm hit.

Okay, I changed plans.  I would bike back to my van, then drive it to the ferry landing and cross over in my van--a safe haven if the storm does hit.

Back to the bike.  Flat tire.  In retrospect I'm sure that I got the puncture yesterday when I used the bike on the return trip through the Open Ponds trail - plenty of prickly stuff potentially lurking there.  And because the flat didn't manifest itself until I got on the bike (tire wasn't fully flat), it was obviously a slow leak.

Damage control: slow leaks can often be fixed with the liquid aerosol 'Fix-a-Flat' stuff.  When I stowed my bike this morning I had seen a good sized gas station and store just a block down the road from the ferry.  So I headed there, and the angels who's job it is to look after hapless travelers smiled on me, because they did have 'Fix-a-Flat' and 'Fix-a-Flat' worked--seems to have sealed the leak.

Biked back to the van without further trouble (no Trouble number Three yet), drove back to the ferry and got the 12 noon boat, which looked like this: very expansive deck space and an almost ridiculously tiny 'bridge'.

Got to the island at 1PM and so I had just enough time to do the less than one mile road walk to the beach and get back in time to take the 1:30PM return ferry (the same boat).

But now came Trouble number Three from an unexpected source: As soon as I got off the ferry I noticed them loading an ambulance (look closely at the photo below).  And then the boat immediately took off for Hatteras, stranding me on the island until the next scheduled crossing at 3:30.   It was a medical emergency, I was told - surely someone else's much more dire Trouble Number Three.

So since 'Trouble comes in Threes' seems to be some sort of cosmic law that overrides even 'Murphy's Law', I no longer had to worry about the Tornado Watch.  The weather was still sunny, so I did the mile long road walk out to the beach.  I passed this hunter shooting at gulls, despite being forbidden to do so: 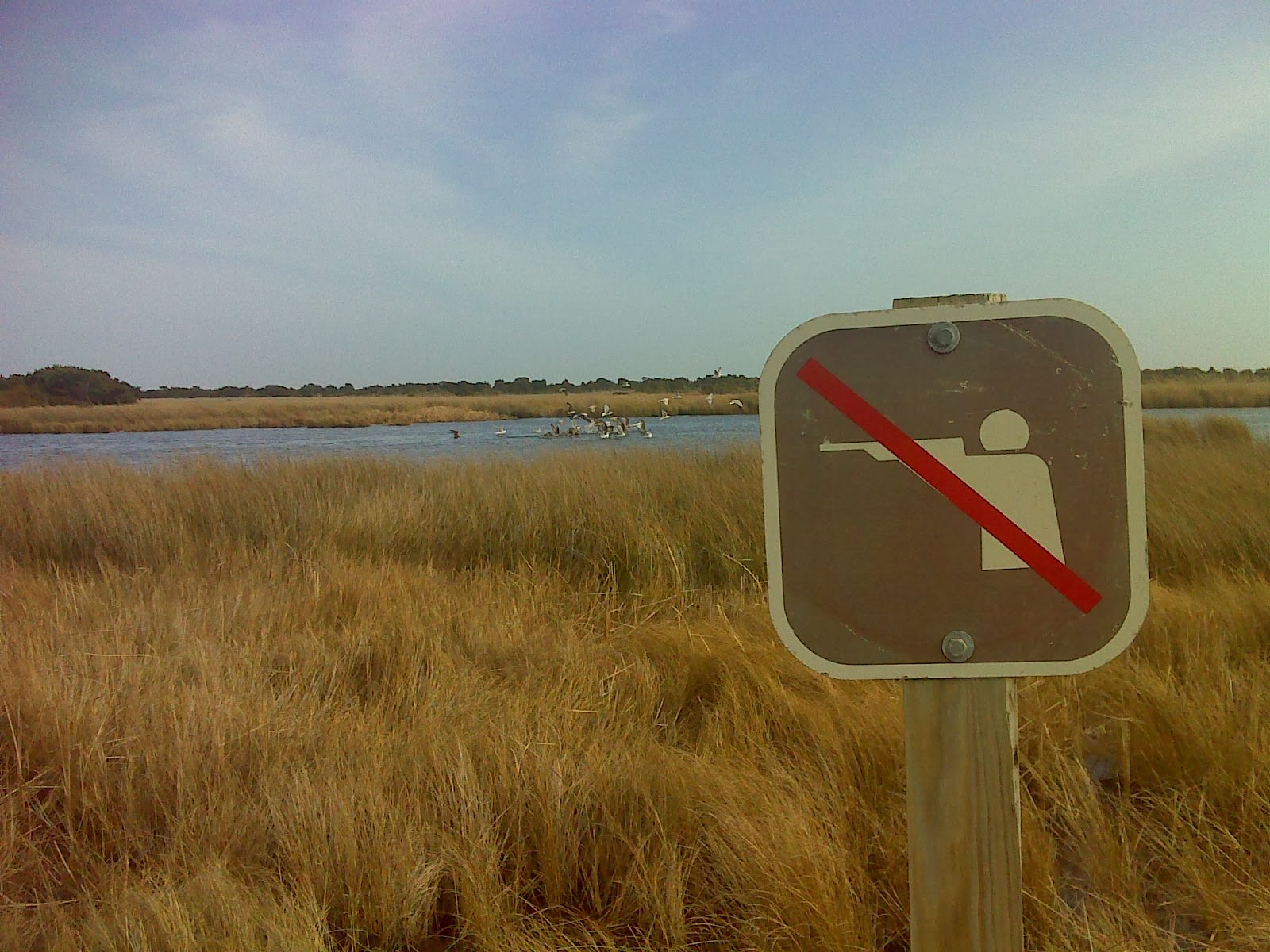 And then I had time to relax while waiting for the 3:30 boat.  The weather got cloudy but not threatening, and in the end I got back home (staying in a modest but wonderful motel) just minutes before the skies opened up with a deluge of rain and whipping winds.

Of course I avoided that trouble.  I had already used up my allotment of three for the day :-)

Here's the GPS map for today's adventure, including the odd looking ferry route that they were using to avoid running the ferry aground.

MST Day 7 - Frisco to Ocracoke Is. at EveryTrail
EveryTrail - Find the best Hiking in North Carolina