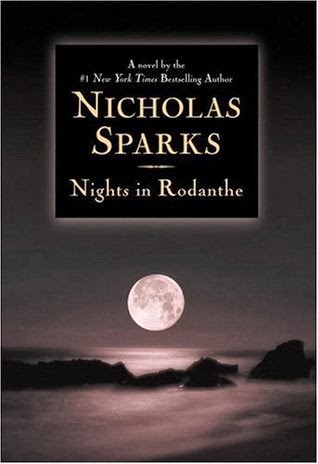 Sorry, spent no 'Nights in Rodanthe', but today I did hike through this little unincorporated town that boasts that it is the easternmost point in North Carolina.  And I did pass by the distinctive house called 'Serendipity', where the 2008 film by the same name was shot. 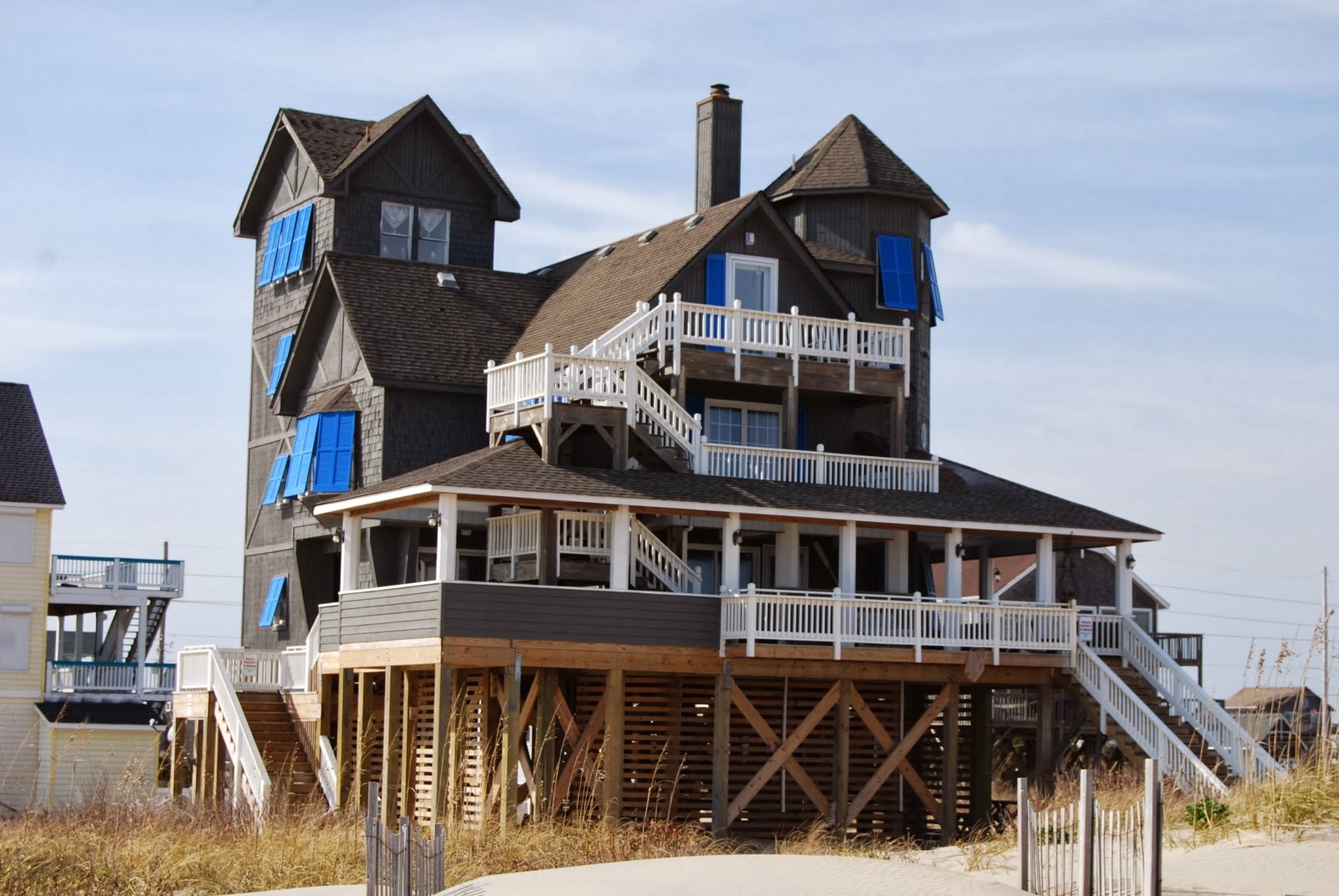 The film was based on the 2002 novel by best-selling author Nicolas Sparks.

Now I'm not into tear-jerker romance novels so I haven't read the book.  But the author says he chose to set the story in Rodanthe because he thinks the town's name "conjures up a mixture of mystery and sensuality."

Oh? The name always seemed particularly awkward to me.  Is the last 'e' silent? Or does 'Ro-dan-the' rhyme with 'Samantha'?  Or do you go all out and sound like some pre-schooler, sounding out your syllables one at a time?  Well, it's the latter.  The locals pronounce the final vowel as a 'long E'.

But the name is from the Old Greek, a variant of Rodantha, meaning 'from the rosebush' and the original *does* rhyme with 'Samantha'.  Of course locals often take pride in their unique pronunciations (my own home ground, which the MST also traverses, is Topsail Island, pronounced "Tops'l"), and ultimately it's the locals' call.

But look.  Any place-name that my spell-check tells me ought to be spelled 'Antihero' can't be all that sexy.

Anyhow, you can rent the 'Nights in Rodanthe' house and sleep in the rooms where the movie was shot.  Romantics might enjoy that.  Cynics might remind them that Time Magazine named the movie one of the 'Ten Worst Chick Flicks'.  Romantics might counter the critics by pointing out that viewers voted with their wallets: the movie grossed $84,375,061.

The 'Serendipity' house was damaged by Hurricane Irene in 2011 and some entrepreneurial new owners had it moved a short way down the beach and added the distinctive blue shutters.  Without the shutters I would have walked right past it and not even noticed.

Other expensive houses with less notoriety were also damaged by the storm, and some of these have been condemned and torn down.  Others are still awaiting the wrecking ball.  Here's more of that story: 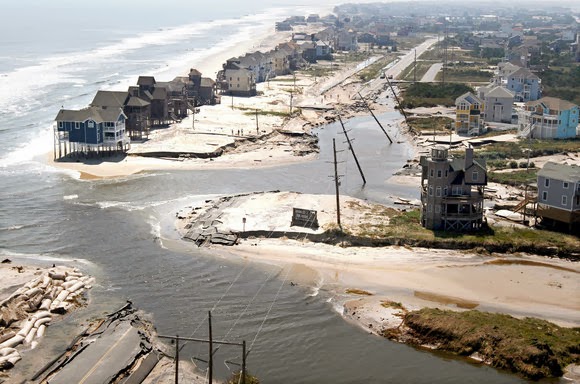 At right is the areal view of the 'unexpected inlet' that Hurricane Irene produced on the north end of Rodanthe.  The first house on the left (sitting in the water) is now gone.  The second one is still there and has been shored up on new pilings and is open for business despite now being an honest-to-goodness waterfront house.  Below is the view of it looking south across the site of the 'unexpected inlet', which they've blocked off with a gigantic new artificial dune.


Other owners of lesser means have given up and pulled the plug on their investments.  I particularly like this house and the irony of its name.  The blue sign above the front door proclaims the cottage's name to be 'Wave Breaker'. Further down the beach the 'cottages' get much more ordinary and you're soon in the slum section of town with its pot-holed streets (if they are paved at all) and its centerpiece, the rickety Rodanthe fishing pier. 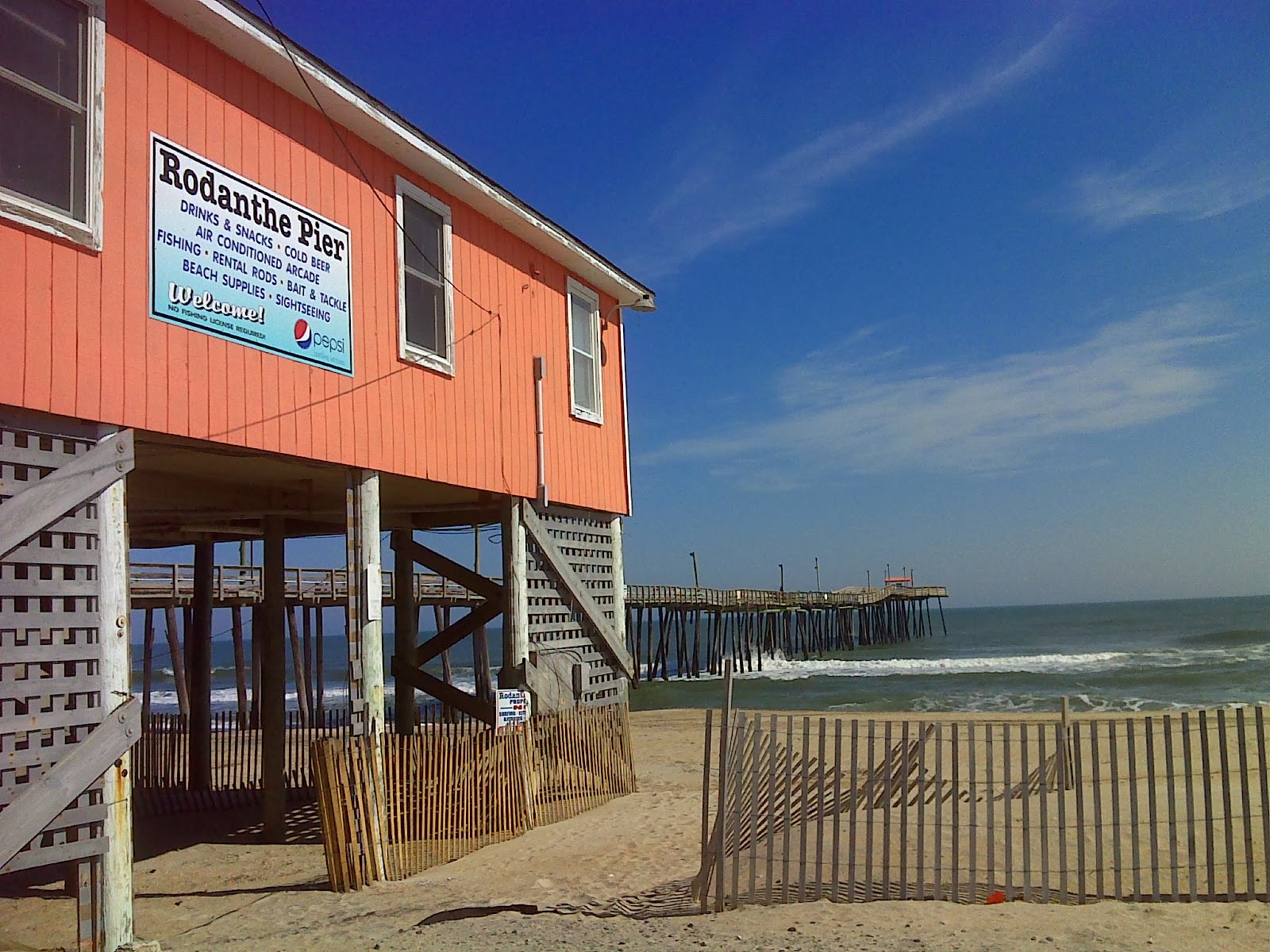 The rest of today's 15 miles of beach hiking was more serene.  Away from town, the National Seashore beaches were pristine and the weather was beautiful.  The cold and wind of yesterday were gone - the temperature soared into the 50's, and I was loving life.

Here's today's GPS track with a link to a few more photos:


MST Day 4 - Rodanthe at EveryTrail
EveryTrail - Find the best Hiking in Virginia
Posted by PJ Wetzel at 12:31 AM