Review of AWOL on the Appalachian Trail by David Miller 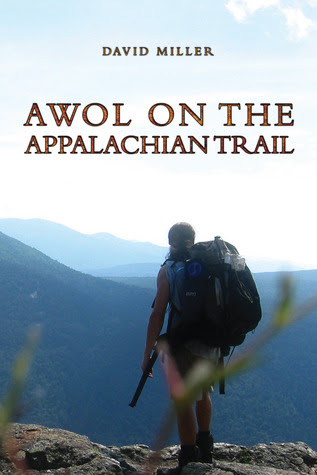 In 1981 Chris Miller, having graduated from High School and not ready to go to college, took off hiking around Florida.  Then after a couple weeks he hitchhiked to Georgia and started hiking the Appalachian Trail--no tent, no stove, no money, no plan.  When he got to Damascus, VA, having accomplished the first 465 miles of the trail, he decided to go on and do the whole thing.  And he did.  That's all we're told in his brother David Miller's book 'AWOL on the Appalachian Trail'.  I want to know more.

In 2003 David, then 41 years old, was having a typical mid-life crisis.  After a year of planning and considering options, he quit his job and headed out deliberately, with full support of his wife and three girls, and hiked the entire Appalachian Trail (but see the last paragraph).  We are never told how much his brother's hike from 21 years earlier influenced him, even subconsciously.  It leaves me wondering about sibling rivalry, how close the brothers are, etc.  Again I found myself craving more information.

A good story-teller might have jumped on this opportunity to add more richness to the narrative.  But David Miller is not a story-teller.  He's a reporter - he wrote bi-weekly newspaper articles about his hike as he was doing it, and originally never intended to write a book at all.  When he did, it turned out to be essentially a long report--a chronicle of his experience.

Professionally David is a computer software engineer.  And his writing style is exactly what you would expect from one who carefully writes and debugs computer code.  It is free of typos and grammatical errors, heavy on simple, short declarative sentences, is written in the first person present tense, and when he discusses his emotions in his narrative he tends to describe them rather than immersing the reader in them.  It left me with the overall impression of a 'workmanlike' piece of prose--it got the job done, and done pretty well, but remained very squarely 'inside the box'.

And maybe that's a good thing.  As it turns out, 'AWOL on the Appalachian Trail', David's personal memoir, has become a companion to his popular yearly-updated 'The AT Guide' - a no-frills encyclopedia of data and information for the hiker who is actually on the trail living the experience for him/herself.  The two books complement each other well.

'AWOL on the Appalachian Trail' contains relatively little information about David's gear or his planning.  It leaps directly into his first day on the trail at Springer Mountain and concludes with his summit day on Katahdin with his wife and oldest daughter.  In between it tends to focus about equally on trail description and his personal battles with various health issues, description of fellow hikers and hostel keepers and his interactions with them, and elaborate, glowing analysis (every long distance hiker identifies with this) of very ordinary food.  As such, the strength of the book is that it gives the reader a good solid feel for the day-to-day reality of doing a thru-hike with enough detail to make it real, but not so much that it becomes tedious.  Finding that balance is a hard thing for a writer to do, and the continuing popularity of this book is testament to the fact that David did it well.

Okay,  now for the niggling little personal pet peeve: The hard-core "every white blaze" purist would say that David's hike, as described, was incomplete.  When I hiked my double in 2012 I followed the marked official trail route without fail (once northbound, once southbound), and always meticulously connected my (invisible) footprints from one day's segment to the next.  So this point stood out for me.  David skipped a half mile around the Loft Mountain Campground in Shenandoah National Park, VA and an even shorter bit of the upper end of Crawford Path between the West Side Trail and the summit of Mt. Washington, NH.  No big deal - he hiked his own hike in his own way - it does not detract one iota from my respect for the man or this book.  It's just one of those peculiar things that you mention when you're reviewing a book that already has a bazillion reviews and are looking for something original to say before you utter the obligatory 'great book', 'highly recommended', 'one of the top five Appalachian Trail hiking books of all time'.  David's book is all of those things.  Bottom line: it's an accessible, balanced every-man's memoir which has inspired uncounted hundreds or even thousands of prospective AT hikers.  Bravo!
Posted by PJ Wetzel at 3:12 AM