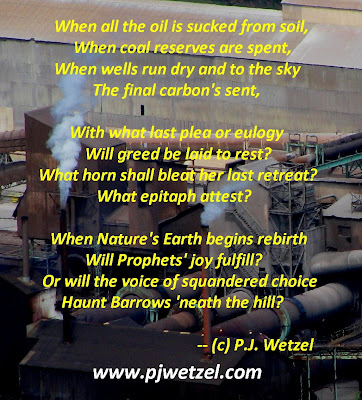 The future is bright.  I come to you with good news and better news.  Take notes because there's a quiz at the end ... well, actually more of a 'final exam' really.

Good news first: Some day we will stop using fossil carbon.  100% guaranteed.  Yeah, even if the last molecule of it is pried from our cold dead hands.  Or maybe we’ll just keep the furnaces burning until we use it all up.

I’m guessing it will be the latter.  I don’t think carbon pollution is going to kill us—at least not on its own.  And I also don’t think our collective greed can be effectively checked as long as there’s a buck to be made.  I suspect the end of the carbon era will come as a grudging concession muttered in cynical boardrooms and black market hovels behind locked doors and drawn shades.

In the 1950's, when humanity realized that we were filling the atmosphere with radioactive fallout, we swung into action and ended atmospheric nuclear testing.  In the 1980's when the ozone hole developed and we learned that CFC's were the culprit, regulators again took effective action.  It's not so easy with carbon--there's nothing intrinsically artificial about it--there are plenty of natural sources.  It's a lot harder to call it 'pollution' and make the label stick.  But there are different kinds of pollution.  Whereas radioactivity is an active destructive agent in the human body but essentially inert in its affect on climate, carbon pollution directly targets the sustaining structures that regulate the health of the one and only atmosphere we have.  But the changes have (so far) been slow and subtle, so we allow ourselves to play the 'frog in the frying' pan game--not realizing we're being burned until we're too damaged to jump to safety.

And just as radiation sickness may not be catastrophic until a sudden run-away cancer develops, so also have climate scientists identified a whole collection of potential sudden run-away cancers in our atmosphere-earth system.  The collapse of the West Antarctic Ice Sheet or of the North Atlantic Thermo-Haline circulation (sustaining the Gulf Stream that pumps huge amounts of heat into Europe) are two prominent examples.  Then there's the nightmare scenario of sudden massive releases of methane from clathrates on the ocean floor.  Methane is a far more intense greenhouse gas than carbon dioxide.  Lastly, effects on the web of life have also been identified, such as irreversible desertification and the spread of insect plagues and insect-bourne diseases.

How badly will we be burned by all these potential tipping points before the carbon spigot dribbles to a stop?  How much of the planet will be rendered uninhabitable or unproductive by heat, drought, disappearance of glaciers and soil erosion?  Will there be any hope of mitigating the damage, or will the collapse of our natural support system lead to a chain-reaction catastrophic collapse of civilization?  Will carbon pollution participate in positive feedback loops involving socio-economic pressures such as wars and coups, overpopulation and uncontrollable pandemics such as influenza?

So, here's Question One of mankind’s quick two-question final exam:  "When your carbon tampering days are ended, how badly will you have soiled your own nest--that one and only atmosphere you suck into your lungs every day?"

We’ll come to Question Two in a moment …

First the better news: Someday the inheritors of Future Earth will learn to live sustainably—truly in balance and harmony with nature’s rhythms.  This is also 100% rock-solid guaranteed.

The only question is: Who will those inheritors be?

We, as a species are currently in a position to dictate the answer.  No … I said that wrong.  We are currently in a position to learn from our long-enduring stable companion species on this planet, to emulate their successes, and thus to claim the inheritance.  Or, failing that, some more capable heir will someday emerge from the rubble of our plundering and pry our inheritance from our cold, dead hands.

Yes, that is question two.  I’ll rephrase the question three more times before I end the discussion.  First rephrase:  "Is there intelligent life in the universe?"  Bear with me on this ... it does lead back to slime molds, and to carbon pollution, I promise.

The answer to the rephrased question, of course, depends on your definition of intelligent life.

Supposing we define intelligence in the sort of mechanistic way that our technology-drunk western society loves to do--as the capability to send radio signals to space and to listen for such signals from space.  That raises some surprising issues.  Foremost among these is that by all objective measures intelligence thusly defined must be terribly short-lived.   Our statistical sample of one lonely observed case tells us that intelligent civilization has only existed for a hundred years.  In a sample of one, we have to assume that's the average!  So, on average, scientifically speaking, Intelligent life on a planet four billion years old lasts a couple hundred years (assuming 'Intelligence' takes as long to decline as it took to develop).  That's far too short a time to have any hope of exchanging notes with some other similar civilization on another world.  Note well that the silence screaming at us from outer space fully confirms this estimate: intelligence by the above definition is ephemeral at best.

Let's try on another measure of intelligence.  Let's define it as the cleverness to find a way to live long enough to be noticed by somebody out there--to sustain a stable existence through geological/evolutionary time scales without self-destructing.  I propose a modest minimum time scale for this survival test, say long enough for an observer on our nearest neighboring galaxy to detect and respond—a modest five million years.  This is a test most species on our planet have easily passed--species like our friends the eagles, the wolves, not to mention sharks, cockroaches, and—yes—that longevity sweepstakes winner: slime molds.  They are our statistical sample.  Their cultural and lifestyle choices are the proven ones.  Our own species hasn't even come close to passing this test.  So by this definition we have a long way to go before we can claim superiority in the IQ department.

So here's the second rephrase of question two of mankind's final exam:  "Who's that dunce in the corner sitting in his own defecation?"

Or maybe a slightly less pejorative phrasing: "How long is it going to take to potty-train this upstart new baby species that's already calling himself' 'wise human' (Homo sapiens)?"  A central underlying theme of my distant future Sci-Fi/Fantasy novel series 'Eden's Womb' explores one plausible answer to this version of the question.  It speculates the demise of Homo sapiens and the emergence of a much humbler, much more balanced human species that has a better chance of surviving out to the five million year minimum test criterion.

So why all this human-bashing? Humans are quick learners, no?  We know what we need to do, don’t we?