Review of 'Menonite in a Little Black Dress' by Rhoda Janzen 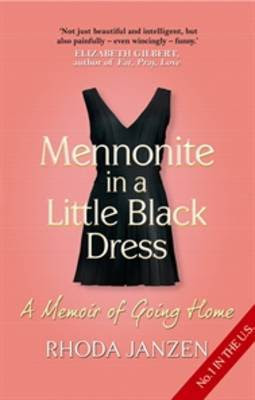 Rhoda Janzen has several things going for her that made this an enjoyable read. First, she is an interesting person. Second, she has a talent for a familiar kind of humor that juxtaposes insignificant detail with excellent comedic timing and an air of elegant absurdity. Third, she is an English professor with a PhD in the subject, so she has the qualifications and connections necessary to pull off a well written memoir. Fourth, she has a reasonably interesting story to tell. And fifth, her background (the Mennonite culture) provides an opportunity to gently educate the majority of us in a relatively little-known subject.

The book was thoroughly enjoyable to read, though not particularly memorable, distinctive, or informative. The theme (or 'story') really didn't take you anywhere. The book started out discussing her divorce from a fifteen year marriage, and there it ended. In between were various vignettes from her life, arranged in no particular chronological order, and the main theme was revisited from various angles. I would recommend it for light beach reading, which is exactly what it was for me.

It's more of a gal book than a male-oriented one, but in no way did it put me off. My Mom read it before me and I'm now passing it on to my daughter who read an excerpt and insisted I finish it quickly so she could read it all, declaring that she 'loves anything written by an English professor'.

Okay - As with any book I read this and wrote my review before reading any other reviews, so as not to be at all prejudiced.  But after having read a few of the top 1-star reviews, I was awakened to the reasonable possibility that this book could be offensive to people with some different perspectives from mine.  I approached this book with no expectations, believing that I was well outside the 'bulls-eye' of Janzen's target audience, and my expectations were met (that's a little joke).  It appears that some of the reviewers who came away from this book offended cared about the subject matter far more than I did.  And for that I respect them and do not propose to disagree with their comments at all, either in detail or overall conclusion.

***** here for my blog reader's convenience is one of the best of those negative reviews, written by Julie Sievers on GoodReads:

"I continued reading past the first chapter only by accident. I had set up the book on my nursing stand, and each time I finished nursing, I was too distracted with the baby to remember to change out the book. But if I'd had free hands, I'd have thrown it against the wall.

In this book, Rhoda Janzen commits the following crimes:

--she writes as if she is telling the story to her best friend. Perhaps that is an effective technique for some types of books, but it never works here. Rather, it sounds as if she is re-working material that played well at the water cooler at work, but has now lost its mooring and audience.

--she tries hard, way too hard, to be funny

--she repeatedly pokes fun at Mennonites, Christianity, and religion in general and -- worse yet -- associates belief with lack of education and inexperience.

--in spite of Herculean efforts, she fails to be funny

--when she fails to be funny, she often resorts to jokes about farting, pooping, or other bodily functions

--her chapters wander around without knowing where they are going, and she follows any tangent that she thinks will yield her a laugh

-- did I mention that she is constantly mugging for laughs?

--she fails to understand that most of the aspects of her childhood that she characterizes as hopelessly "Menno" are not particularly unusual. She was an awkward child embarrassed by her unpolished appearance. This is not enough to make her fascinating.

--It reads as a rough transcript of a lot of conversations with her sister and best friend--both in structure (the randomness of the flow of thoughts in any given chapter) and in tone (the way in which she seems completely sure that we will feel the same way that she does and take her point of view).

The fundamental problem underlying all of these issues is that Janzen can't decide whom she wants for an audience. Most of the time, it seems that this book is a rough transcript of jokes she's told to her academic friends -- jokes where the Mennonite practices of her childhood are punchlines that only urbane, sophisticated academics can fully understand. This comes across as obnoxious. But then she drifts into a more sympathetic portrayal of some of these characters, particularly her mother, as if she is writing for those who are able to take a more nuanced and sympathetic view of religious cultures. Anyone even remotely capable of such a view would have been completely put off by the first tendency, however.

In short, I don't understand how this book ever was published. I really had no idea that such a manuscript could get through editing. But here it is.

For the record: I am an English professor, raised in a strict, conservative Christian family in a backwoods, rural area, who now lives in a town full of clever, urban sophisticates. Rhoda, you do not speak for those of us who have walked that road. Let's get that clear."