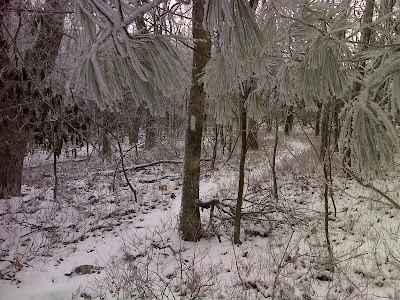 General Impression/Theme:  Weather.  I hiked this in mid-January and had some of the nastiest winter weather:  an all day rain with temperature barely above freezing then some snow and wind and bitter cold, but some nice days too.

People:  Few and far between.  Met two long distance section hikers, Peter ('Lasher') headed from Harper's Ferry to Springer and 'Thor', frequent long distance hiker, headed the opposite way doing the same section.  Otherwise the only other people I met on the trail during these ten hikes was a foursome of young women vet medicine students out for a day hike on their last day of freedom before classes began at Virginia Tech.

Worst Memory:  Had one of my three serious falls here, slipping on snow covered ice right by the road above Woods Hole hostel, came down fast and hard on adjacent rocks.

Best Day Hike:  The open ridge area of Rice Fields, a nice hike north from Pearisburg.  A close second is the day hike south from Pearisburg to Angels Rest, with excellent panoramic views of the town and the New River valley.  Third choice is the pleasant field walk to the massive old Keffer Oak, largest tree on the trail, from VA 42 in the Sinking Creek valley.  And fourth, from the same parking place head south to Kelly Knob for some nice views.