Erwin to Damascus (actually a bit south of the VA border): ~73 miles

General Impressions/Theme:  The outright best and some of the worst.  This ten-day-hike section took me over the extensive balds of the Roan Highlands, which, on retrospect, continue to be my very favorite part of the Appalachian Trail.  Yet not far away, just across Highway 19E is a section of the trail that is the subject of an ongoing feud with some of the locals - a feud that began when the government 'took' land away from its owners via eminent domain, and apparently done with an attitude that seemed to say: "the government's bigger than you, so if you fight it, you lose".  As a result, vehicles parked at trail crossings here are frequently vandalized, and the trail itself is often trashed, littered, white blazes overpainted, etc.

People:  My favorite 'people' of this section were a horse and a goat in their trail-side pen on Shook Branch Road just up from Watauga Lake.  Never have I encountered a more people-friendly duo of beings (other than dogs).  Actual people on the trail were limited to weekender day-hikers though I met Lone Wolf, a former thru-hiker at Watauga Lake shelter, just out for a few days.  In the shelter register at Clyde Smith Shelter the last entry, dated 2/18/12 was from Iceman and Viking.  At the time I had not met them yet.  They would have been only the third and fourth thru-hiker I met, but they passed me while I was off the trail taking three zeros to take care of business.  At the Mountaineer Shelter there was an entry from 'Meats' dated 1/28 stating he was out for a weekend training hike for his successful 2012 thru hike.  Again, I photographed this entry even though it was before I had ever met him.

Supply:  Most of these ten days I was able to use the same base: the Walmart in Elizabethton, TN (pronounced 'eliza-BETH-ton').

Worst Memory:  Apart from the feeling of being an intruder in the contentious section of trail described above, I had two other bad memories: a seriously painful sprained ankle that, for a while, made me wonder whether my adventure had come to a crashing end, and an incident where I nearly ran my van off a 20 foot sheer drop (no guard rail) on a switch back on snow-packed Dennis Cove Road when I lost control after losing all traction and trying to turn around.  In my daily report from that day I did not mention how serious this problem was because I didn't want to worry my elderly parents.  And it turned out okay in the end: I avoided disaster by something like 12 to 18 inches.

Best Day Hike:  If you can do the distance (one way with support), start at Carver's gap and hike over all the great balds - Round, Jane, Grassy Ridge (a side trail), Little Hump and Hump Mountain and then drop down to end the day at US 19E.  The views are magnificent and plentiful.  The high grassy meadows are magical. 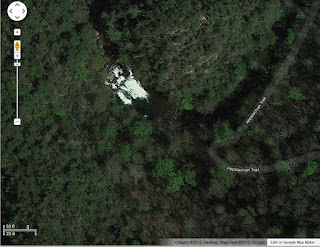 One of the other very popular day hikes in this area is also an excellent choice for a shorter day - Laurel Fork Falls.  It even looks great from Google Earth.  There's a well-used (often crowded) parking lot on US 321 just east of Hampton, TN, that leaves you about a 2 mile hike to it (one way).

A more remote halls, but more impressive to me because of its sheer height is Jones Falls, just up from a peaceful meadow walk along the Elk River.  To get there, however, you have to hike a long way or risk parking in that frequently vandalized area (with support you could get somebody to drop you off).  Finally, the Mountaineer Shelter is one of the nicer new shelters - by far the best one in Tennessee, and nearby Mountaineer Falls is a great stop during the wet season, though it dries up in late summer.
Posted by PJ Wetzel at 7:20 AM