In preparation for whatever book I finally write about the Appalachian Trail, I've begun a review of my hike, organizing it in ten day-hike chunks from south to north.  Here's the first installment in the form of a set of notes rather than polished prose: 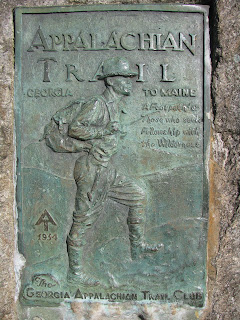 General impressions/Theme:  The NoBo bubble--met/passed hundreds of hikers starting their northward trek.  I deliberately planned to work my way southward during the time of peak NoBo activity in order to be exposed to as many of these folk as possible.  It worked.  Daily hiker count approached 100 on several days.

Best Day Hike:  My actual favorite of these first ten day hikes was the 608 steps climbing beside Amicacalola Falls on the approach trail.  On the actual AT, there's a very pretty and popular day hike to Long Creek Falls from Three Forks, not far from Springer.  Then there's the popular climb up to Blood Mountain from the Walasi-Yi trail center at Neels Gap.  That's great for a clear day, but being a waterfall fan, I'll go with Long Creek Falls and the fragrant rain-forest-like approach as the winner.

Worst memory:  Not recognizing Rhea Patrick when I passed him again on my return leg simply because he had his hat and pack off and was stopped, resting. Passed by him hardly saying a word.  *So* embarrassing ...