There should have been confetti 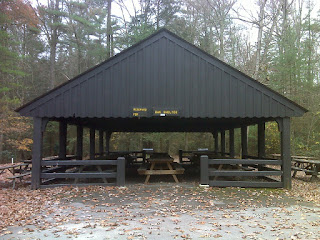 Shortly after noon today my immediate family gathered at the Oak Pavilion in Caledonia State Park to celebrate and hike the last mile of my 2012 double/yo-yo pair of thru-hikes:  4368.4 miles in all.

We were getting ready to have a picnic lunch before heading out to hike when a SoBo hiker rushes up asking for 'Seeks It'.

Lo and behold it was none other than 'Sharkey' - the only other hiker this year who is doing a yo-yo.  He had met Quarry Gap Shelter 'innkeeper' Jim Stauch up the trail about a mile.  Jim knew we were here because he had been working in the park when I arrived this morning.

Well, as you can imagine, Sharkey and I were both shocked and delighted by the coincidence.  I had first heard about Sharkey back on Sept. 16th from 'Bobcat', a flip-flop hiker who had met him up in Maine before he flipped down to Harpers Ferry and began heading south.

Sharkey had done a NoBo thru-hike back in '92 and half the trail (GA - PA) in '08.  This year he decided to celebrate the 20th anniversary of his thru-hike by doubling it.  He plans to reach Springer before Dec. 31'st.  Good luck, Sharkey!

Somehow I feel that my hike has been blessed by chance encounters like this throughout - things that you couldn't dream up if you tried.  Like the day in June when I decided to drop in at Harper's Ferry before returning to the trail in New York, and ran into thru-hiking friends X and N Trovert, who just happened to have arrived at the ATC office minutes before I did.  Then there are the three times I met Harry and Leo on the trail, including the evening before they finished their self-supported thru-hike, also all by day-hikes.  There's the coincidence that I was able to pass the plaque celebrating the anniversary of the AT's completion on the very day of the 75th anniversary of that completion.  And finally there are all the amazing weather breaks I had along the way - not a trace of snow on Mt. Rogers or Clingman's Dome in March, not a breath of wind on Mt. Washington on the day of my double presidential traverse.

What a ride it has been!  And today's gathering is like icing on the cake: 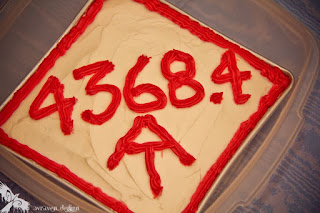 Of course we invited Sharkey to have lunch with us.  The main dish celebrated the hike with a 75th anniversary theme - serving Kraft original Mac and Cheese with Spam, both of which share this year as their 75th anniversary year, and very appropriate trail food. 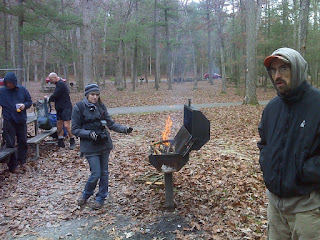 Then off we headed, with our talented photographer, Adriane Workman of Wraven Design hiking along.  Here she is with her camera, keeping warm by the fire - it was a cloudy day in the 40's.  Also in the shot are brother Jim, Sharkey and my nephew Rik at right.

And off we went, clowning around as we hiked. 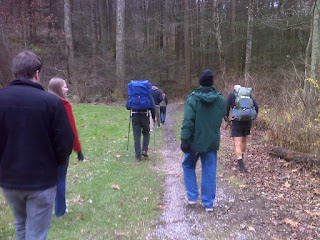 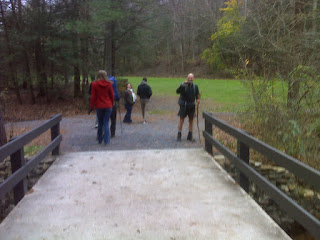 Thanks ever so much to Sharkey for sharing the video he took.  And Adriane was busy covering every angle of the day's activities with her camera and creative eye.  Here are just a couple of her products - more to come: 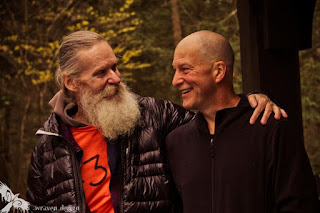 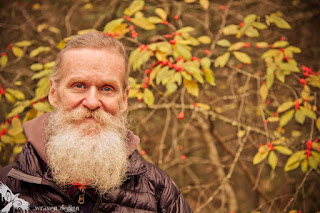 In all a very satisfying wrap up to this ten month adventure.  We adjourned as darkness approached, and we headed to the nearby hiker friendly Flamingo Restaurant for dinner.

On the way home, stomach comfortably stuffed, I could not have felt more contented.  What a great day!


AT Day 270 - Caledonia State Park at EveryTrail
EveryTrail - Find hiking trails in California and beyond
Posted by PJ Wetzel at 3:15 PM