On Sunday, 20 March, at 11:33AM Eastern Daylight Time, the sun passes directly overhead at the equator, saying farewell to the Southern Hemisphere and coming northward to warm our half of the world for the next six months.

It's called the 'Vernal Equinox' and it marks the official (technical) start of the spring season.

Here at the Cloister at Three Creeks, Mother Nature got the memo, and spring is busting out all over.

This video is a celebration of some of the new blooms found today, March 19th, less than 24 hours before spring arrives. Most of them turn out to be invasives, though they seem to be as natural as ... well ... dandelions in the grass. Yes, both Dandelions and Violets were introduced from Europe. Two other first blooms found today are also outsiders, coming from Eurasia. They are both Veronicas, and both blue or bluish -- the Blue Veronica and the much less showy common Veronica. 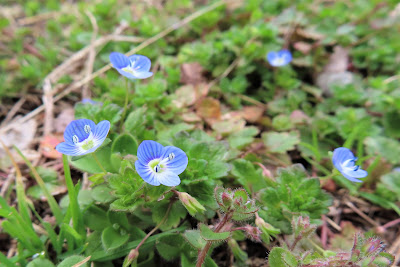 Also featured today are some of the evergreen plants that have abided all winter.

Special attention is given to the views of the Cloister's three creeks - views that will be going away as the leaves fill the forest. We visit Gravelly Creek as it falls over the Escarpment into Stoney Creek's flood plain, we visit the 'Gathering of Many Waters' where Flat Rock Creek joins Stoney Creek, which is divided here into three channels, so that it appears that four streams gather into one.

Finally, we visit the audio-experience of the 'Loudwater' cascade on Stoney Creek; and we end this video with a look at a rare semi-double form of the showiest spring flower in the temperate deciduous forests of eastern North America this time of year - the Bloodroot: Sanguinaria canadensis. 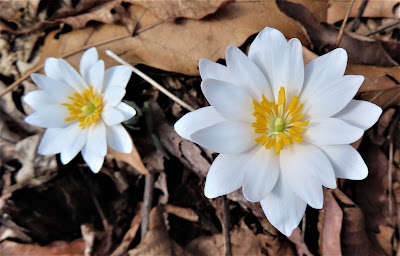 We await one last confirmation of the arrival of spring at the Cloister--the swelling and opening of the Tulip Poplar buds in the young plantation. For that you will have to stay tuned.