March 22nd. Talking to the trees: Has Spring arrived at the Cloister?

Tulip Poplar, or Yellow Poplar (Liriodendron tulipifera) is the central focus of today's search for the answer to our question - On what day does spring officially arrive at the Cloister at Three Creeks?

This species of tree has been my favorite from my days roaming the woods of far SE Pennsylvania as a child. In 1964 I did a comprehensive documentation of the bud-opening of ten different tree species, drawing 'plates' in the tradition of the old botanists. One of these plates documented the Tulip tree: 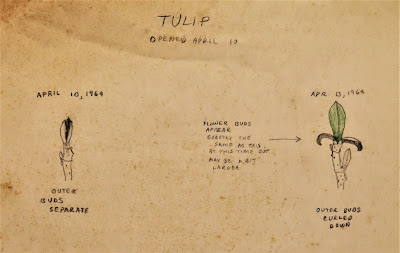 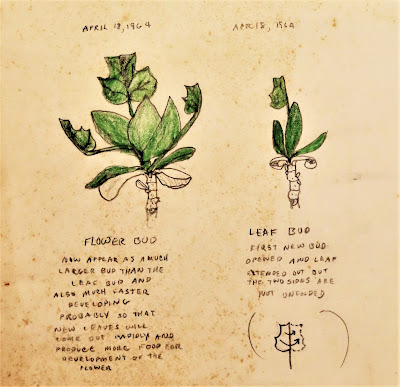 Note the date of first bud opening in 1964 - April 10th.  The area of these observations has virtually the identical climate to that of the Cloister at Three Creeks (this is confirmed by comparing current observations of the progress of spring in that area to my observations here at the Cloister).  This year we are talking a shift of two weeks or more, to earlier onset of bud opening.  This may be a sign of the effects of global warming; but whatever the cause, the same trend is observed in the observations of the peak bloom of the famous Japanese Cherry Trees on the mall in Washington DC.  Over the past century, the average peak bloom date has moved six days earlier.
So ... what do the trees tell me, in answer to the question? Is it spring? Are we there yet?

Also featured in the video is a look up the mountain at the 'overlook' where I recorded the previous video on March 21st.

The backdrop is the trashed zone of cleared forest in the 'Yarrrrrrrrd', where the previous owner had cut down more than a dozen mature, majestic oaks, and piled their skeletons in a heap, left them there to rot. The 'Yarrrrrrrd' is now regenerating and has become what I refer to as my 'Tulip Poplar Plantation'. Yet within it there are still surprises. While doing the video today, I discovered a man-made feature, which, in eighteen months at the Cloister, I had never before noticed.

Email ThisBlogThis!Share to TwitterShare to FacebookShare to Pinterest
Labels: Musings of the Eremite