Spring explosion! March 17th at the Cloister at Three Creeks

There were so many new spring wildflowers blooming today, March 17th, St. Patrick's Day, at the Cloister at Three Creeks that it is getting hard to keep up with them all. This may be the last post that even tries to be comprehensive in its reporting of every new thing that makes its appearance.

Even the tree buds are beginning to swell and open -- not yet the official Tulip Poplar buds in the young trees in the plantation in the Cloister's infamous 'Yarrrrrrrrd'. But those will very likely be bursting open in just a few days.

Other than the new flowers and tree buds popping out, today, on damp drizzly start to my hike, I ran into a thing that one can miss entirely unless hiking in these damp conditions. The fungus called Astraeus hygrometricus sits locked as an inconspicuous brown ball in the dirt until damp weather comes. Then it unfurls its flower-petal-like "legs" and literally lifts its spore producing puff-ball-like organ up into the air to attract passing pollinators. The unit is entirely disconnected from the ground, too, so that with a gust of wind it can blow around like a tumbleweed and migrate to more favorable sites. Here is what nature can 'program' into a simple fungus, given literally millions of years to tweak the program. Such a wondrous, miraculous, majestic display of resourcefulness and complex engineering! Wow. 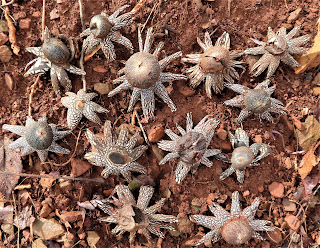