From Iowa's country roads to the Historc Lincoln Highway

Having left the routes of the American Discovery Trail and Great American Rail Trail behind when they turned south toward Omaha, I struck out on my own--westward to hook up with the oldest US cross-country highway--the 100-year-old Lincoln Highway.  Along the way I included a real gem of a native grassland that I could hike as a connecting route--a through trail, a mile long.

We'll start there.  In the grass: 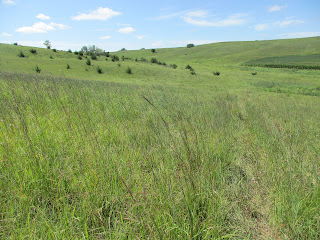 It's called the Vern and Wilmer Petersen Wildlife Management Area, and it's smack-dab in the middle of nowhere.  I love it.

The nearest paved road is a county road coming south out of the town of Manilla, but the direct route I chose was quiet county road 'X Avenue'.  Walked it straight east-west for most of a day. 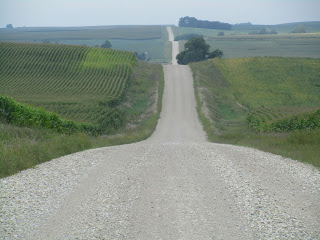 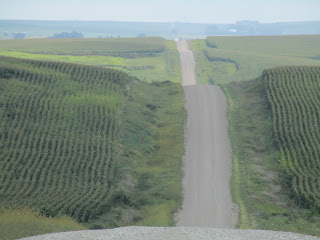 Leaving the gravel road behind at the WMA parking corral, with its panoramic view, 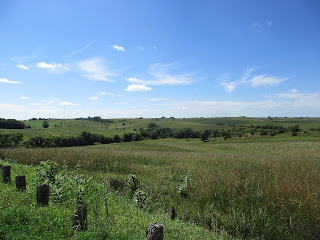 I headed toward the pond visible in the distance, 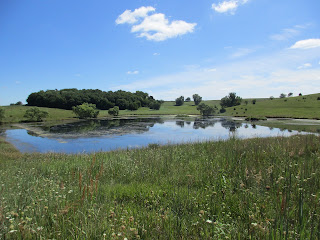 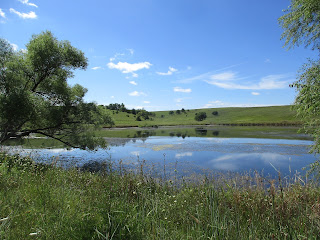 … and then on to the horizon, where another east-west dirt road awaited me. 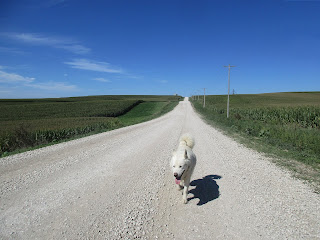 Yes, on this day I had an unexpected companion.  This has happened to me at least five times before.

When you pass a house where there's a resident dog, 99 percent of the time they are 'hostile.'  They *doggedly* defend their territory.  But every now and then one will just come up to you, tail wagging, and sniff--curious, perhaps.  Friendly, definitely.  But inevitably, when this instinct kicks in rather than the defensive one, you become the pack leader.  Suddenly your new companion will follow you to exhaustion, with no regard for personal discomfort, instantly faithful, eternally bent on being loyal to the bitter end.

Often the bitter end comes when I pass the territory of another dog.  There's an invisible scent barrier there that my companion is unwilling to cross.  But not on this day.  I and my new Samoyed companion passed two other dogs.  One barked, the other disappeared, but in both cases my new buddy just stuck especially close to me and soldiered on.

What do you do?  Telling the fellow to go home doesn't work.  In the end, this fellow followed me for nine hot sunny miles, panting more and more, delving into every roadside mud hole until it was an unsightly stinky mess, but never giving up, always scouting for roadside prey or roadside threats, being the dutiful pack member.  And at the end of the day I just had to hope that when I disappeared, my companion's homing instinct kicked in.  There certainly was a clear scent path to follow all the way back home.

But I'll never know for sure.  And so I'm left with a few unwelcome twinges of guilt.  Was there something I could have done?  Stopped at another house?  Flagged down a passing driver?  Well, there were a grand total of two of those, roaring by in a cloud of dust.  Just one of those little dramas that real life presents that have no script to follow.

But then I *did* have a script to follow (sans canine).  After three days on the dirt roads, including a visit to Six Bee Tree Natural Area and its nature trail (part of the Manteno County Park property), 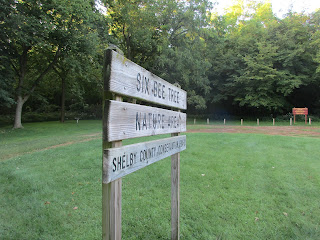 I emerged in the town of Dunlap and joined the 100-year-old route of the Lincoln Highway--the first and most prominent of the early cross-country motor routes.  Dedicated in 1913, just ten years after Horatio Nelson Jackson's historic first-ever cross country automobile trip, Lincoln Highway preceded the US Highway Numbering System by a dozen years.  In the late '20's the Boy Scouts of America undertook local projects across the country to set marker posts along the route. 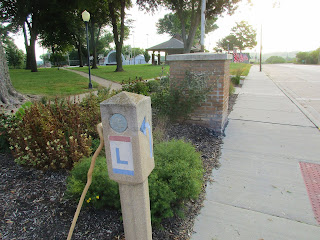 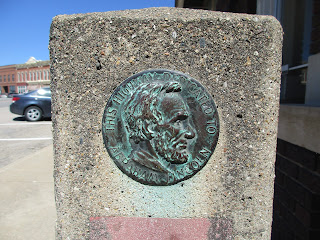 Before that, the blue "L" was just painted haphazardly on trees or wooden posts, etc.  Kind-of the way hiking trails are still blazed today.

In 1919 the new Lincoln Highway was chosen as the route of the first cross-country military convoy, which included among its personnel, the young Brevet Lt. Col. Dwight David Eisenhower of the Tank Corps of the WWI American Expeditionary Forces.  That experience stuck with Eisenhower the rest of his life, and led him to champion, as president, the 1956 National Interstate and Defense Highways Act, that established our Interstate Highway System.

And yes, that convoy passed through Woodbine, Iowa about noon on July 28, 1919 (they stopped for lunch, served by the Red Cross Canteen Service at 1:15PM just down the road in the town of Missouri Valley).

This year marks the 100th anniversary of that convoy, and there have been several re-enactment convoys passing through the area recently, though I didn't encounter any that I know about.  But amazingly, I was in Woodbine on the very date (September 6th) that Eisenhower's convoy reached its final destination in San Francisco.  Here I need to add this side note: Exactly fifty years earlier, September 6th, 1869, the first-ever paying passengers on the newly opened Transcontinental Railway reached their final destination in the very same city, San Francisco.  I don't know if anybody else has noted that coincidence. 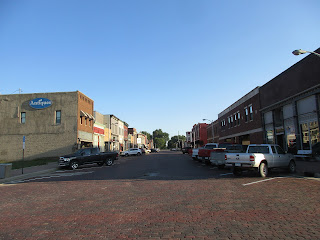 Were these quaint brick streets in place in 1919?  I didn't spend enough time there to find out.  But I did notice the gazebo nearby, dedicated as a Memorial Waypoint in the very first motorized cross-country trip, summer of 1903, in which George A. Wyman rode a 1902 California (brand) Motorcycle from San Francisco to New York, arriving just 20 days before the already mentioned first four-wheel automobile cross country trip of Dr. Horatio Jackson. 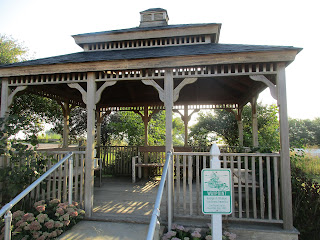 There's also another work of art dedicated to Iowa corn next to the gazebo. 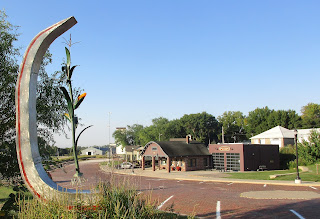 Out in the country, hiking the shoulder of what is now US 30, I struck gold. 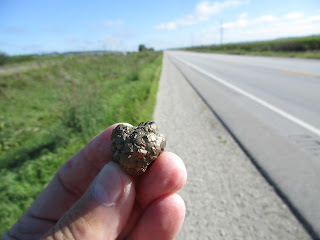 Among the gravel, inexplicably, was a nice pure nugget of Iron Pyrite crystals.

And then there was this curiosity, double life-size or more: 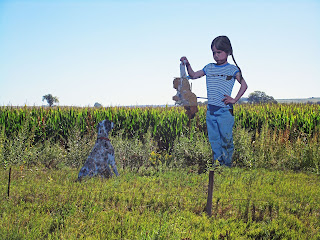 It took a little research, but I found the story:  It's a sixteen-foot plywood cut out of a young girl holding up a badly-chewed teddy bear and scowling at her Dalmatian.  It was erected in 1999 (and is showing the effects of the weather).  The artist is John Cerney, who does giant cut-out art and posts it where passing drivers can see it.  Some of his art is commissioned, but this wasn't.  All of his art is wholesome, often with a rural theme, and very reminiscent of Norman Rockwell.

Anyhow, here are the GPS Tracks for the five hiking days covered--three on the quiet gravel back-country roads, and two along the Lincoln Highway. 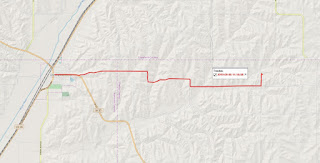 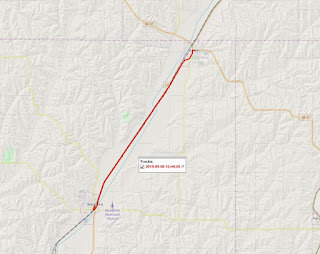 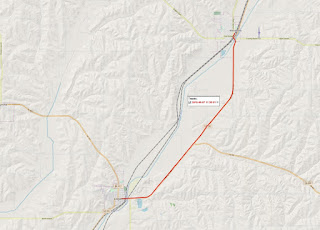 I'll be following the Lincoln Highway for quite some time now.  More about  it next time.
Posted by PJ Wetzel at 9:30 AM