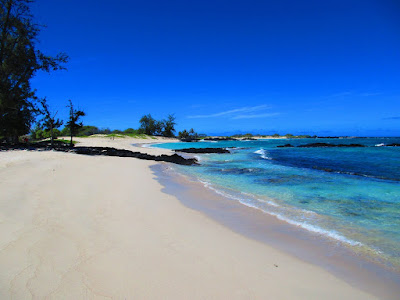 This is Makalawena Beach.  It could be on Bermuda, with the pink highlights to this pure coral sand beach.  To get to this world-class undeveloped, secluded oasis you either drive two miles on a rugged track that only 4x4's with maximum clearance can negotiate, then walk half a mile; or you drive 1.2 miles on a rugged, rocky dirt road that 2-wheel drive vehicles can negotiate if you have the guts, and then park and walk a mile.

It's the classic "no pain-no gain" beach.  The reward is *so* worth the effort it takes to get there.

I'm calling Makalawena our M-1 beach for this report, and it's in the middle of a long hike over remote lava fields and rocky beaches including jagged lava flows, wave-smoothed black lava boulders, and loose white coral rocks.  I even met 'coral man' along the way. 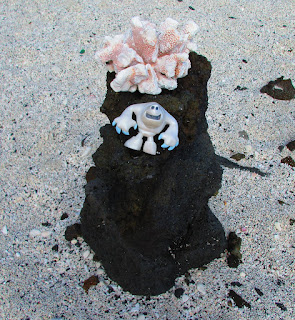 The hike continues past some algae-filled spring-fed lagoons, which the ancient Polynesians tapped for drinking water. 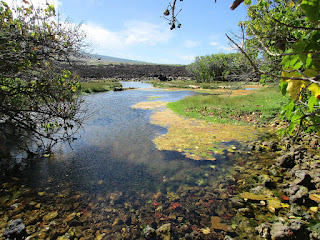 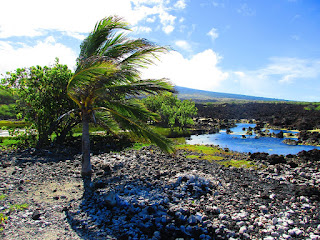 M-2 is Manini'owali Beach.  It has paved road access and the parking area overflows every afternoon.  The first view, below, is taken looking south with the hill called Pu'u Ku'ili poking up in the background. 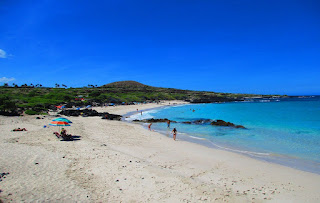 I climbed that too, and here's the view back toward M-2, with extinct Kohala Volcano, the oldest of the Big Island's five volcanic summits, in the distant background. 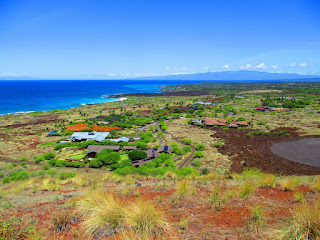 Here's another view of the side hill trail on Pu'u Ku'ili, with the neighboring Island of Maui's main summit, Haleakala, looming in the distance. 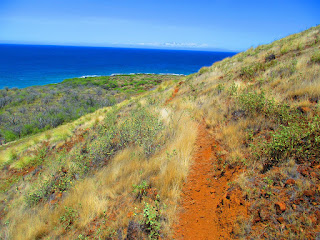 Here's the view of M-2, this from the other end, with Kohala behind. 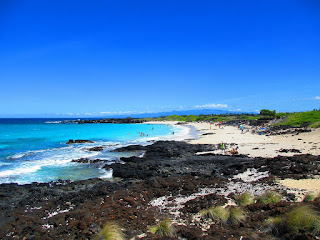 It's a nice beach, but too crowded for me.  Nevertheless, it's the beach where angels come to practice playing their harps. 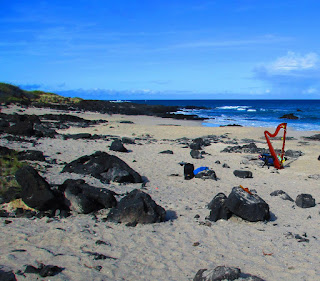 On the way from M-2 to our M-1 paradise, the hike traverses shoreline of the sprawling Kekaha Kai State Park, which has limited development so far, but big plans.  There are other 'beachy' areas with nice views along the way, but these are stone-pebble beaches with strong surf--great views but not great for swimming. 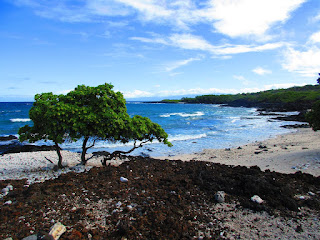 So next we'll move on to M-3.  This is Mahai'ula Beach, accessible at the end of the rugged unimproved 2-wheel drive route.  They're building a nice bath house here, and I assume there are plans to pave the road eventually. 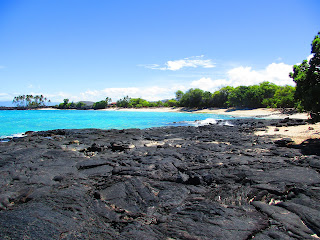 Now, to get from M-3 to M-1 you hike some rugged coastal lava where there isn't much trail in places, though the route is still part of the Ala Kahakai National Historic Trail.  One part of the ancient trail had been widened for vehicle 4x4 traffic at one time, though it's now only for foot traffic.  Here's a look at a bit of that, looking south on the approach to the M-3 beach. 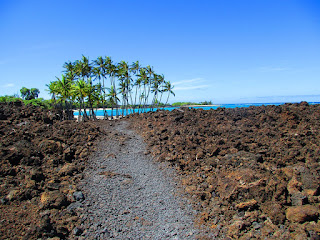 In the other direction, this rugged rocky trail runs for 6/10 mile before you emerge at the magnificent secluded Nirvana of Makalawena Beach.  Here is the first view of that beach looking north as you emerge from the lava trail.  In the background you can see Pu'u Ku'ili peeking above the far end of the beach, nestled between Kohola on the horizon at left, and Mauna Kea in a wreath of cloud at right. 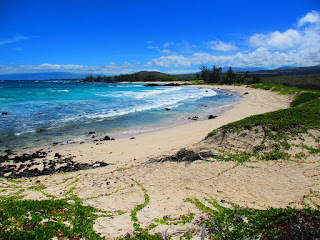 And so we've come full circle in our description of this five mile stretch of Big Island shoreline.  Here's an interactive map of the GPS Track for most of this section.  You can zoom in at will to get a close-up of the beaches and rugged lava crossings to reach them.

My love affair with this coast has only intensified as I continue to hike the Ala Kahakai route south toward Kona.  I only have a few more hikes to go and I'll arrive at Ali'i Drive and the tourist mecca of Kailua-Kona.  Watch for these reports, which will be forthcoming after Tropical Storm Olivia clears the area.