Back in the Saddle - Third time's the charm 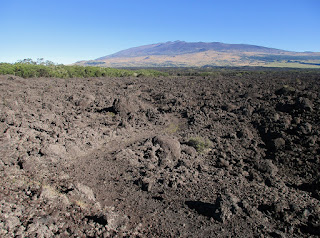 I've discovered that the Pu'u 'O'o Trail, at about 6000 feet elevation, located in the 'saddle' region between Mauna Kea and Mauna Loa, is my favorite place to hike on the Big Island.  Except for a tendency for unpredictable rain and mist to threaten the area at almost any time, it's just about ideal.  Temperature is perfect for hiking, and the setting varies from stark, barren lava to deep lush rainforest.  In places that change happens in just a few steps - see the headline photo above and note the forest in the near background at left.  So with several variations in between the two extremes, there's very little opportunity for boredom.

After two previous visits to this trail that were hampered by rain and fog, I returned today because the weather was about as clear as it gets.  This meant views of the nearly 14,000 foot summits that this venue straddles, and bright sunshine for viewing everything else.  The ubiquitous blossoms of the ohia tree, for example, practically glow with their particular shade of intense red.  Here's one with Mauna Loa as its backdrop and nothing but lava and smaller ohia trees in between. 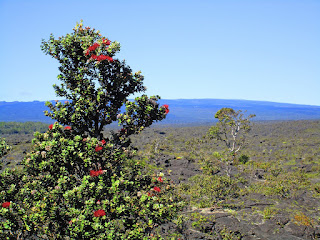 Ohia is one of the pioneer species on new lava, and since the big island is continuously being re-surfaced with new lava, it is perfectly adapted.

I got an early start to take full advantage of the sun, before its heating began to stir up clouds; and that meant hiking amid the heavy dew--one source for the moisture that would make those clouds. 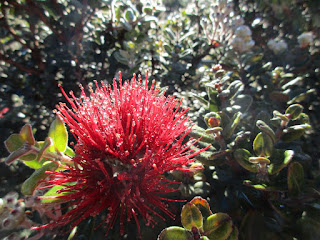 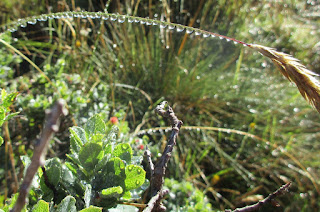 Besides the Ohia, the other distinctively Hawaiian pioneer species on lava include Uluhe, the Old World Forked Fern, which behaves more like a climbing vine than a fern, 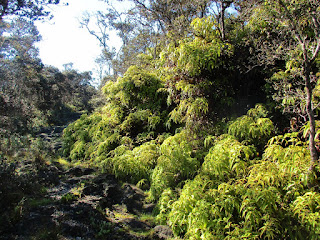 and a fern that behaves more like a tree--the Hapu'u 'i'i, which can get upwards of 20 feet tall, and whose giant fronds unfurl leaflet-by-leaflet in an amazing choreographed ballet. 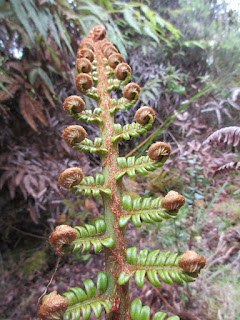 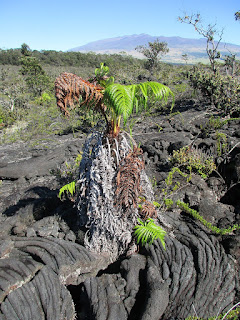 But in the older forest--patches that were spared by the flow of new lava--they reach their full glory.  Here is one shown in the shadow of a massive old tree, which I haven't yet identified. 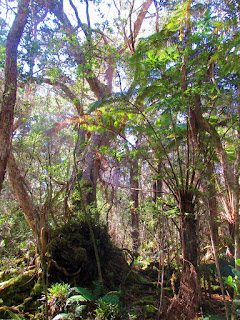 Clouds did roll in by late morning as the breezes began to stir, though they were benign and shallow and not posing any rain threat.  All they threatened to do was to close down the 'Big Sky' that made views like this so impressive. 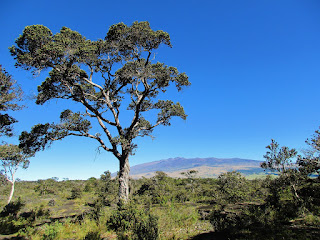 Mountain weather is almost universally best before 10AM.  I had captured all my good photos by then and just enjoyed the cool breezes as I strolled back to my car.

Next up - more hiking along the North Kona Coast, as I extend the length of continuous trail I'm discovering there.
Posted by PJ Wetzel at 7:49 AM