The historic coastal trail. Where else, on a public trail could you see ...

The Polynesian settlers of Hawaii got around primarily by canoe.  Naturally.  They were a seafaring people.  Their ancestors island-hopped across the Pacific from Taiwan over thousands of years.  But when on land they needed trails and they were nearly as good as the ancient Incas about building them.

On the dry side of the Big Island many of these trails survive and can still be hiked.  If you're looking for remote beauty along the boring drive north of the Kona Airport, I highly recommend seeking out these trails.

Farther north, in southern part of South Kohala District (the two hikes I report here straddle that ancient political boundary between North Kona and South Kohala, marked by a still-impressive monument), the trail passes right through some progressive ultra-luxury resorts, which were built with preservation of the history of the land in mind, including the preservation of this historic trail.  Thus the title.  Where else on a public trail would you pass … 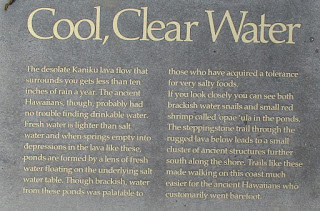 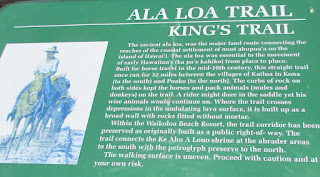 … and all this in ONE DAY HIKE … the total distance out and back being about fifteen miles.  I divided the hike into two shorter sections, which, with some exploring, were about eight miles each.  Park at the 'Anaeho'omalu Beach Park lot.  There's more than enough parking available at all times.  And do it all in one long day (bring plenty of water as it's likely to be sunny and hot; and wear sun screen), or two morning strolls.

Here are the GPS tracks.  The northern half passes through the developed Waikoloa Beach Resort in South Kohala, and the southern half is through the rugged undeveloped coast of North Kona. 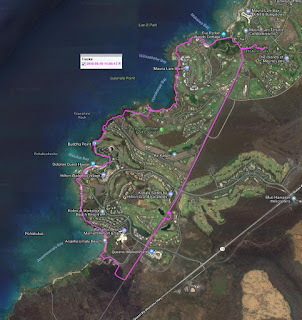 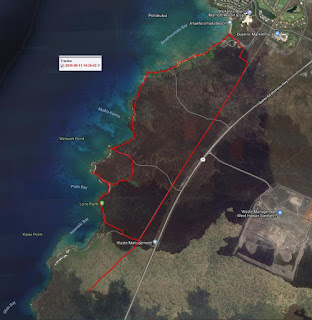 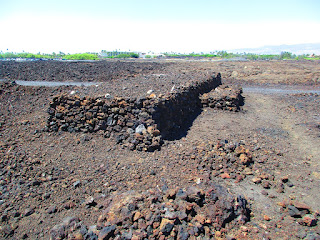 I hiked the King's Road south to the point where it was buried by an 1859 lava flow.  The ancient coastal trail also ends there, buried by the 'new' lava.  I didn't hike that last stretch of out-and-back beach at Keawaiki Bay.

Back at home the next morning it was an unusually clear morning.  Barely 3/4 mile from where I'm staying I had a chance to see another sunrise over Hilo Bay from above the 1924 Hilo Sugar Company building (it says so in big lettering on the gable). 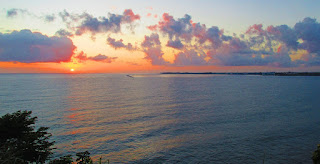 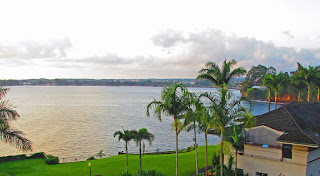 Where to next?  I have so many choices that it's hard to decide.
Posted by PJ Wetzel at 9:48 PM