Tuesday July 31:  I got up to the sound of the Atlantic Ocean, with waves crashing against the sandy North Carolina Shores.  I watched the sunrise over a little Taj Majal. 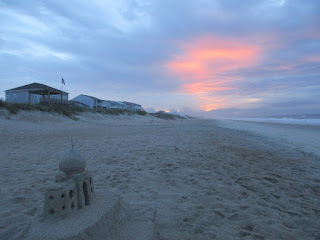 The next morning, a quarter of the way around the world, I watched the sunrise, saw and smelled the salt spray, heard and felt the Pacific Ocean waves crashing on the shores of Hilo Bay on the Big Island of Hawaii.

I had come to Paradise.  This is my favorite place in all the world.  Perhaps by the time this adventure is over I will have a new favorite.  But for now, this was where I wanted to be.

I settled into my erstwhile home beside a lava-rock wall studded with orchids, the tall palms waving in the trade winds behind. 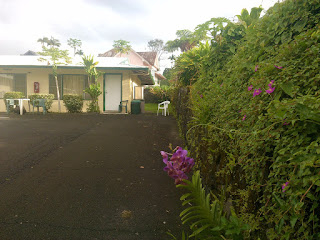 I strolled over to the Sack-n-Save to stock up on basics, passing this view of the Wailuku River, just half a mile from my front door. 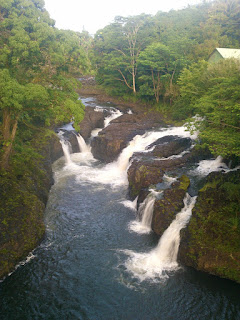 The Wailuku is the longest river in the state of Hawaii.  Its source is high up on the slopes of Mauna Kea.  Just a mile and a half upriver from the view shown above is a more famous waterfall--Rainbow Falls. 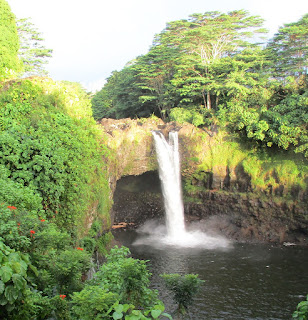 That was where Day 3 began.  After settling into my place and sleeping off the jet lag and other effects of the grueling flight, I got an early start so as to catch a glimpse of rainbow there at the falls.

Next it was on to Onomea Bay a short 6½ mile drive from home.  This is the epicenter of Paradise--The four-mile "scenic drive" off the Hawaii Belt Road, the Onomea Trail, the Donkey Trail, and the trails through world-renowned Hawaii Tropical Botanical Garden.  More crashing waves in the bay.  I bought an annual membership to the Garden so I can come back as often as I like.  Here's a sampling, all packed into a three-mile loop: 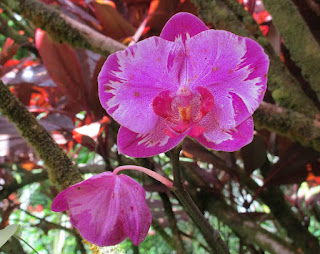 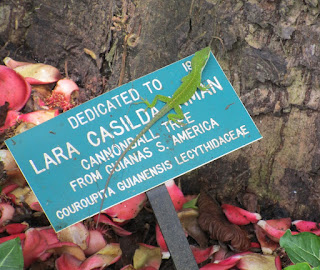 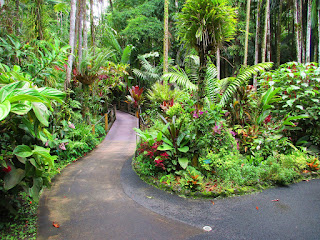 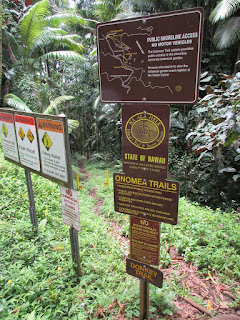 Finally it was on to another classic tourist stop--430-foot Akaka Falls.  It's just another eight miles north from the Botanical Garden.  The half-mile loop trail has been opened up (lots of trees cut away) since my last visit about ten years ago, so that you can see the falls as you approach the primary viewpoint. 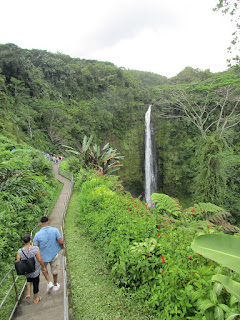 Then comes the falls in all of its glory.  Words cannot describe ... 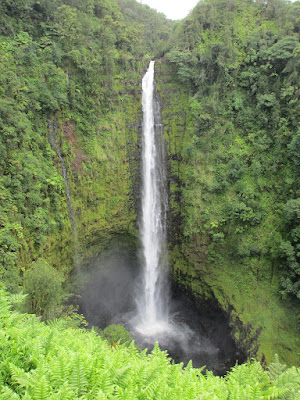 Now for a preview of things to come.  I'm here to see another kind of river.  Little more than ten miles from my house. 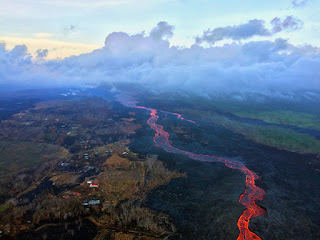 That was today's view from the daily USGS helicopter flight.  This is the only time in living memory that this kind of high-volume lava flow has happened.  Fingers crossed it will still be this good on August 16th.  That's how long I had to wait to snatch a window seat on a first-rate helicopter tour.

Meanwhile it's a big island (clever, huh).  I can't decide what to do next, but you can be sure it will include some awesome hiking.  Stay tuned.