Northwest Territories and back - a Christmas Story


This is the fourth and final installment remembering my 1969 Bucket List drive to northern Canada in the dead of winter.  In the last report we had left the Arctic and done a driving tour of the Canadian Rockies through Jasper and Banff.  Now we faced the long drive home to Pennsylvania.  Four days of steady progress across the Canadian Prairies brought us to the north shore of Lake Superior. 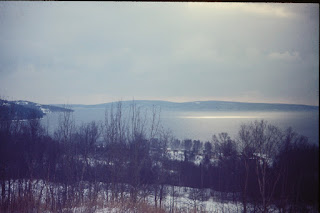 The day before, Christmas Day, we spent driving across western Ontario.  It was to be just another travel day--no special plans.  I was going to celebrate Christmas with family a few days later.  But this Christmas Day turned out to be the most memorable, and most meaningful, of all my sixty-eight Christmases.

The reason?  I got to give to strangers in need--selflessly and without pre-planning--a gift that was desperately needed.

We were driving down an icy, curvy highway after an overnight snow.  About the middle of the morning we came around a curve and saw a small maroon sedan turned on its side in the ditch on a slick downhill curve.  A distraught young man and his wife were climbing out of the drivers side door, and the man gave us a desperate wave.

It wasn't needed of course.  We pulled over and quickly learned that neither of them were hurt beyond a few bruises--just badly rattled.

I remembered having passed a town with a closed gas station a few miles back.  Maybe we could find someone around who could help.  The young man (actually older than me by a couple years) came with me, and my roommate stayed with the young woman and the overturned car.

At the town, we knocked on the door of the house closest to the gas station, and the gentleman who answered the door did not hesitate.  Soon he was following us back to the accident scene in his pickup truck with a tow chain thrown in the back.

When we arrived at the overturned car, we found that another driver had stopped and he and my roommate were trying to right the car by rocking it back and forth.  With the three of us who had just arrived adding our muscle to the task, we did manage to get the car back on its wheels.  The young man tried the starter and his car started right up!  It had just a few cosmetic dents and dings.  With the tow chain, the gas station guy easily yanked the car out of the ditch and back onto the road.  He wouldn't think of taking any compensation for his help.  The young man and his wife were on their way to a family Christmas celebration in the city of Kenora, but he pulled out one of his wrapped Christmas gifts--a bottle of some sort of liquor--and offered it to me as a thank-you.  I told him to keep it.  The warm-fuzzy feeling of having given a small gift of help when help was needed was more than enough.

We all said our farewells and headed on our way.

And for the rest of that day the cold gray surroundings somehow felt warm and bright.  The glow came from inside. 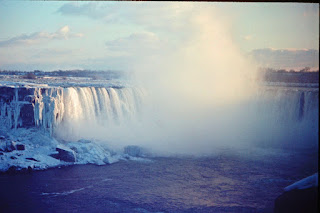 Two days later we crossed into the US at Niagara Falls.  The ample freezing spray from Horseshoe Falls had deposited a thick coat of ice on everything. 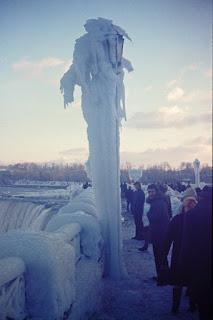 The adjacent lawn was like an ice skating rink.  That's Rainbow Bridge in the background. 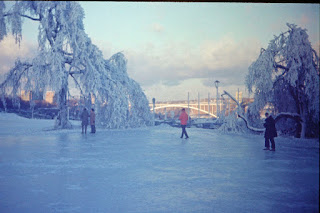 The next day I dropped Bob at his home in Reynoldsville, PA and stopped in briefly at Penn State before reaching my parents' home in SE Pennsylvania.

We had only a few days at home before resuming classes at Penn State.  After spending three weeks in below zero weather, the State College winter seemed mild by comparison.  We got a snowfall a few days into the new Semester and my friends and I undertook an overnight project to build a snow monument that would be truly interactive--something that people would not be able to ignore. 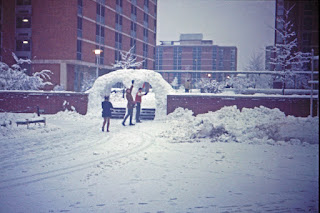 Just a few days later, waking up early and gazing out the window of my room on the sixth floor of Shunk Hall, I was met with this spectacular sun pillar beside the iconic Nittany Mountain. 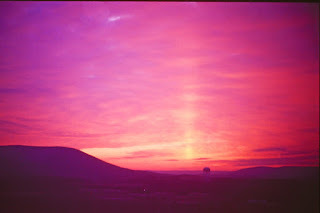 Somehow the glow seemed a celestial reflection of that feeling I had experienced a couple weeks before, on Christmas Day in the snowy wilds of western Ontario.