This is part two of my nostalgic coverage of a December 1969 road trip to the Canadian Arctic.  In part one I introduced the 1969 version of me, my roommate and companion on the journey, the 1930's vintage camera I used to document the trip, and the 1962 VW Bug that took us.  We had traveled two days from State College, PA and reached St. Cloud MN by the end of that report.  Now it's on into Canada.

The bane of automobile travel is that moving fast is too easy and stopping is too hard.  You miss most of the special sights entirely because you whiz by them too fast.  When you do see something so obvious that it stands out even at 60mph, you have to slam on the brakes, find a safe spot to pull off the road, and then extract yourself from the artificial environment of your car's interior.  All too often you just don't bother, opting instead to keep eating concrete mile after monotonous mile.  That was the case on this day.  We made it from St. Cloud, MN to Minot, ND and my hand-written summary includes a lament on the missed photo-ops. 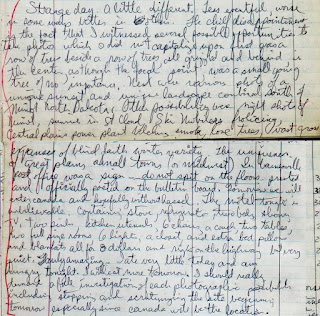 Fortunately the next day provided at least this stark winter scene on the North Dakota plains: 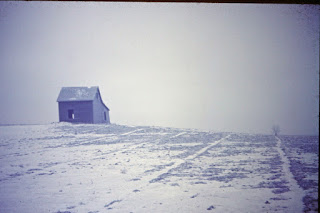 As the trip data attests, we crossed into Canada before mid-morning

My first impression of Canada, especially in the little town of Estevan, was that I had just crossed from a forsaken and neglected wasteland where nobody wanted to live--one of the coldest places in the US--into a well-loved and well-cared for haven of comfort--warmest place in Saskatchewan.  Towns and farms here looked and felt alive and happy and well-cared for.  By comparison northwestern North Dakota felt bleak and dreary and heartless.  This is testament to the real physical significance of a line drawn on a map.

After passing through some of the flattest land there is, we came upon some hilly country west of Regina, with the clouds above seeming to be in synchrony with the land. 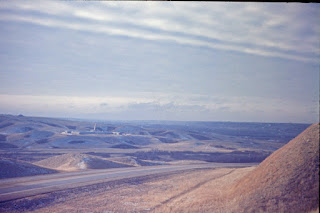 This was a mostly sunny day, and surprisingly warm for so far north so late in the year.  But the good weather was about to come to an end overnight, setting up one of the most harrowing experiences I've ever had while driving.

Overnight a quarter inch of freezing rain fell.  It was a place and time where no salt was used on roads, and no cinders or sand either.  We hit the roads despite the virtual ice skating rink they had become.  Fortunately we were in flat country again, and I found that I could drive at a steady 17 or 18 mph and hold traction, but no faster.  We never saw a salt or sand truck all morning.  As we proceeded northwest toward the Alberta border we came up behind three eighteen wheelers going 15mph.  Too slow, I figured.  I wanted to pass them and keep up my established pace.  The ice-slicked road was straight and level and I could see that there was no oncoming traffic for miles ahead.  So I pulled out into the left lane and began to creep past the three trucks.

Truck one, passed successfully.  Eighteen miles per hour.  Steady as she goes.

Truck two, no problem.  Road clear ahead, slick as a mirror.

Truck three.  Eighteen miles per hour.  Steady.  Steady.  I had come up beside the cab of the last truck.  Almost past it.

And then it happened.

Was it a draft made by the front of the big truck?  Was it a tiny pebble on the ice?  Suddenly, and without any noticeable cause, I lost all traction.  My car was sliding out of control back toward the right lane, right in front of the nose of that front truck.

Wham!  Suddenly the silent, protracted, seemingly interminable angst of sliding, sliding, sliding, totally out of control across the finely polished ice rink turned to the jarring rattle of the snow-covered grass and weeds of the shoulder and ditch beyond.  The VW clambered down into the shallow swale beside the road and I was smart enough to downshift and keep up my forward momentum.

There wasn't enough snow to get stuck in, but the ditch was too deep to get out of.  I kept the wheels churning and proceeded to bounce along beside the road in the ditch for a quarter mile or more to a side road or driveway where I was able to bounce up out of the ditch and return to the road.

Whew!  Talk about an adrenaline rush.

I hadn't even noticed what the three trucks had been doing, but now I found myself tucked in behind them again, creeping along at fifteen miles per hour.  And damn happy to stay right there.

By the time we got to the Alberta border we had driven out of the freezing rain and into falling snow.  Who would ever expect to feel relief to be driving in a snow storm?  Suddenly the trucks and I were able to increase our speed because the snow on the road gave us much better traction.  Twenty-five mph.  Even thirty!

Eventually the snow stopped, and the day settled into a more usual routine.  We passed through the surprisingly large and modern, rapidly growing urban center of Edmonton. 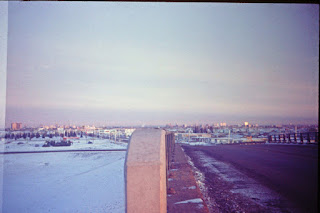 Located at 53 1/2 degrees North Latitude, Edmonton was far and away the northernmost place I had ever been.  I don't know exactly what I expected to find, but log cabins and fur trappers and sled dogs were what came to mind before I actually saw the place.  I suppose I was a little disappointed.  I had not yet gone far enough to escape the influence of civilization.  And yet it was wonderful to have heat and electricity and a warm soft bed in my motel room at the end of such a harrowing day.

Edmonton sits in the middle of a high-plains wheat growing area, but not far to the northwest we drove out of the agricultural area and into country that began to feel more remote.

The morning had dawned bright and clear and chilly, and passing the town of Valleyview, we came upon an area where everything was encrusted with thick hoar frost with the temperature in the low teens. 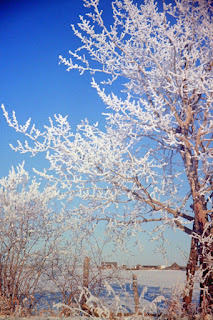 The town of Peace River had a frontier feel to it, though there was nearly no snow on the ground.  People told us that it had been an unusually mild and dry winter thus far. 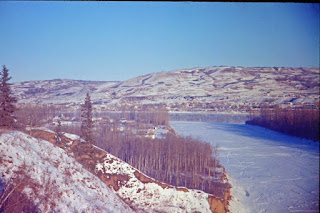 We ended the day at the Flamingo Motel in High Level on the Mackenzie Highway in far northern Alberta.  Now called the Flamingo Inn, this is one place that is still in business today, and has apparently been greatly expanded and upgraded.

We had arrived in the Canadian Arctic.  This morning the temperature dropped from zero to fifteen below as we headed north.  That was cold enough that the VW's heating system was totally inadequate.  Time to fire up the kerosene heater.   In order to light it and get it burning cleanly, we had to get out of the car and set it on fire on the shoulder of the road.  We must have looked a sorry sight standing around by our stopped car, with PA license plates, out there in the middle of nowhere.  One vehicle passed us as we were getting the heater going, and he did stop to inquire if we needed help.

These unvented kerosene heaters are obviously a fire hazard, and to a lesser extent a carbon monoxide hazard.  Further, all the water vapor they release in combustion condensed on the inside of the car's windows and froze.  It was hardly an ideal solution to staying warm in the arctic winter, but the car didn't catch fire, we didn't asphyxiate, and somehow I managed to keep the windshield clear enough to see where I was driving.

We crossed into the Northwest Territories around midday and had to stop to change a flat tire.  I honestly don't remember that event, so it must have gone quickly and smoothly.  What I do remember are some of the scenery.  Hoar frost permanently covered every twig and stem. 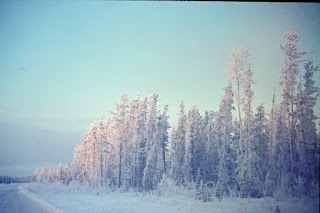 We stopped at a side road to Hart Lake Fire tower and took in the vista shown up top.  We stopped at Alexandra falls and enjoyed the roaring water, falling among mounds of frozen spray. 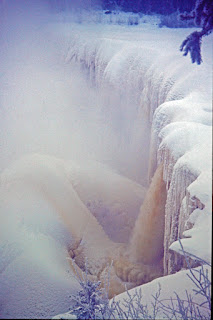 Late in the day we passed Lady Evelyn Falls, similar in size and appearance. 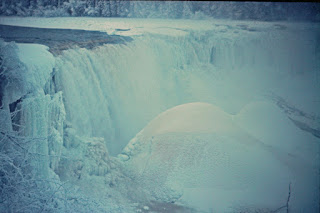 And as the afternoon light was waning, at about 4PM we reached the Mackenzie River.  There was no bridge across the river at the time.  In fact it wasn't until five years ago that the Deh Cho Bridge was completed.  In summer there was a ferry.  In winter you drive across the river on the ice, your route marked by a few occasional sprigs of evergreen trees.

As I said, this had been an unusually mild winter, and they told me that the ice road had just opened and was still open only to passenger vehicles.  Indeed, out on the river a small tanker truck had tried to cross and nearly dropped through the ice. 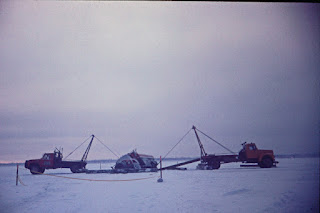 While we stopped to photograph this scene, out there in the middle of the mile-wide river, a man walked up to us and announced that he was a tourist spending the winter in a cabin by the river here.  Amazingly he was from Pennsylvania and was shocked to see our familiar license plate.  We had a nice chat but it didn't last long because it was rapidly getting dark and I didn't want to cross the rest of the river at night.  Our motel was on the other side, in the town of Fort Providence.  We were now just 400 miles from the Arctic Circle.

Next time:  Yellowknife, and the end of the road.  Then west to the Canadian Rockies.
Posted by PJ Wetzel at 7:23 PM