This is part three of four in the series remembering my first epic Bucket List trip - a college Christmas-break drive north to the Canadian Arctic.  At the time (December 1969), the only all-weather highway to reach Canada's Northwest Territories went to its capital of Yellowknife and ended there.  The highway opened in 1960, and getting to the end of that road had been on my bucket list for a long time.

I'll continue with the report of the 1969 trip in a moment.  But first I want to digress briefly to explain why I'm revisiting that trip at this particular time.

You see, Northwest Territories now has a second access road called the Dempster Highway.  Since it opened in 1979, it too has been calling my name.  Now the NTW government has seriously ramped up the volume of that Siren-song.  With the November 15, 2017 opening of the extension to Tuktoyaktuk, this route provides the first and only North American public road access to the Arctic Ocean.  I want to go there.  Actually, I'd like to walk there.  But that's a subject for another post.  For now, let's return to 1969.

In my last report, my roommate and I had crossed the Mackenzie River on an ice road, passing an oil tanker truck that had nearly broken through the ice and sunk to the bottom.  The next morning dawned clear and chilly - minus 12F - and my car wouldn't start.  We had to find somebody to give us a rolling tow, and he charged us $5 for the service.  Finally we were on the road and headed east along the north side of Great Slave Lake.  Here's a view of the lake in the distance as we descend toward it. 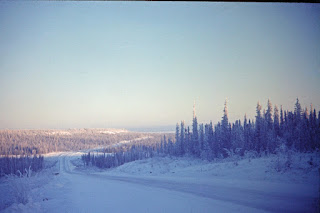 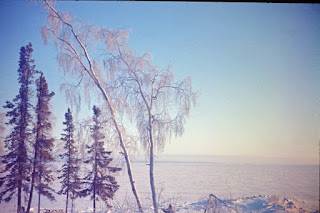 and were in town by mid-afternoon.  We checked in to the infamous Gold Range Hotel, still an iconic destination today.  Here I found some of the frontier flavor I was seeking.  The hotel didn't really have a lobby.  You checked in at the bar on the ground floor.  As we arrived there was a loud argument taking place, nearly coming to blows, between a First Nations local and a French Canadian construction worker.  Seems one of them had burned the mattress in the worker's room, and the clerk/bartender was insisting that somebody had to pay for it.  Coming in the door right after us was one of Canada's finest - a Royal Canadian Mounted Police officer.  The tension in the room quickly faded, and the clerk/bartender turned her attention to us.  I don't know who paid for the mattress, but as the old saying about the RCMP goes, "they always get their man."

I wasn't about to have a repeat of the morning's car-starting problem so once we had the keys to our room I took the battery out of my car and brought it in.  I also drained the oil out of the car because it was time for an oil change.

The next day was our day to tour the town.  We headed out on foot at about 10AM in balmy near-zero temperatures.  It was an extremely rare sunny day.  Weather statistics for December in Yellowknife show that for the entire month the town averages no more than 24 hours of sunshine.  Let me emphasize that.  Twenty four hours of sunshine for the *entire month*.  We got four or five of those as we trekked around that day.

We headed for a high-point in the old part of town where there is a little park and a plaque honoring the bush pilots of the region.  There I shot the headline photo up top, and several others.  Here's the look northeast toward Latham Island and the old part of town. 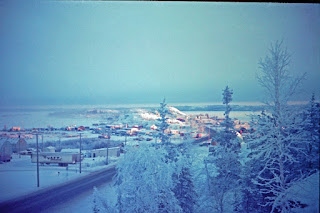 This view is in the opposite direction, back toward what's called the new town, which can be seen on the horizon in the distance.  The second photo shows a comparison shot between 1969 and today. 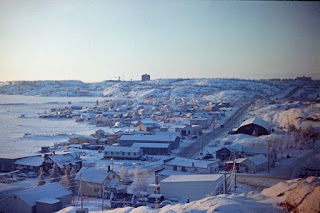 When we visited Yellowknife in 1969, it was a gold mining town and had only recently been named the capital of the Territories.  Population had swelled from around 2000 to 6000.  Gold mining was on the wane by the 1980's, and the town was only thriving because of the government jobs.  But with the discovery of diamonds in 1991, the boom returned, and today the town has nearly 20,000 citizens.

The next day we headed out.  I filled the engine with fresh, warm oil and connected the warm battery and the car started on the first crank.  That day we drove 600 miles on snow covered dirt roads.  When it's that cold the snow isn't slippery.  Driving fifty miles per hour is no big deal.

The next day there was more driving on dirt roads. 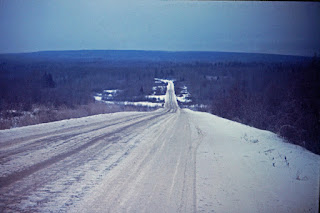 This was simply called the 'Forestry Trunk Road' and it made the connection through 100 miles or more of unpopulated territory to the town of Hinton in the foothills of the northern Canadian Rockies.  This was a tough day.  Soon after the photo of the road above it began to snow and accumulated up to six inches.  We were seriously out in the middle of nowhere, nobody was going to plow the road.  Snow was coming down heavily enough that the road was hard to see, and my windshield wipers kept fouling.  I can still feel the stress and tension fifty years later when I recall this drive.

But finally we were out of the Arctic and back to civilization -- the Canadian Rockies at Jasper and headed south toward Banff.  It was pretty country, even in the bleak, cloudy heart of winter.


Next time:  Heading home, spending Christmas Day on the road.  It was, and still is, the most memorable Christmas of my life.
Posted by PJ Wetzel at 10:37 AM