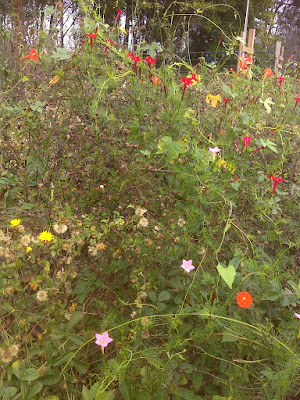 Today I was deep in the heart of rural south central Alabama.  The only town I passed through was Honoraville.  It has a church, a gas station, a senior center, a tiny post office, and a hand-me-down store that was selling out and closing.

The people here are the salt of the earth.

I'm coming to an understanding of these people, and I love them.  Two or three times every day, someone stops beside me as I'm walking and asks if I'm 'broke down' or 'need a ride somewhere'.

Being from the urbanized, jaded northeast, I'm finding their concern and willingness to put aside their personal agenda in order to take care of a stranger's needs astounding.  Hard to accept at first, but this is their way of life.  They watch each other's backs.  They care.  And I am touched.

But back to the title subject.  It was a humid warm day, and the November flowers seemed to all be competing with one another for the bees and butterflies - trying to make one last quick batch of seed before winter.  The morning glories were the star, and I don't know the names of some of the other flowers in the photo up top, but here's another example of the aggressive profusion of the red star morning glory, Ipomoea coccinea 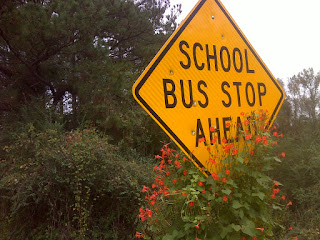 I also saw yellow blazes for the first time since I left the Coosa Trail and began my road walk south.  It seems from here on south the route is pretty well blazed.  Here they only added to the color riot :-) 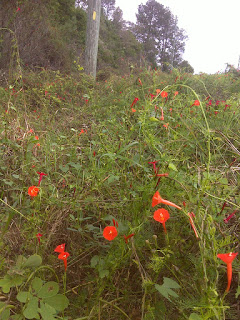 Okay, now for a change I'm presenting a bit more of the nitty-gritty detail about today, and some of the flavor of my logistical process.  For this, I'm copying my personal journal.  It's workmanlike prose, not meant to do anything but record the facts:

"I was up before dawn and got out the laptop to check weather, because it looks sketchy today.  Radar shows that the expected rain was still all north of Montgomery and the local forecast is for the chances of showers to increase through the morning and not be ‘serious’ until after noon here, which is what I had guessed from previous forecasts.

Today is the Pinhoti 100 endurance race and up there in northeast Alabama they are going to have rain through the day—tough conditions for them.

I got off the laptop just after 6AM and began hike preparations and had the time to trace a great Post Oak leaf on the shirt I wear today—number 32. 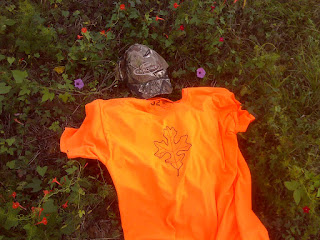 Finally it got light enough to hike, and at 6:30AM Eastern as civil twilight was beginning I headed to a pull-out a mile and a half down in a quiet spot. That began another day of many short legs, all less than 2½ miles today.

The morning started out warm and humid and a bit foggy with temperature in the low 70’s but then a weak front came through and brought slightly lower humidity and a north breeze. If that was the front associated with the rain it was a very weak one. The temperature actually rose into the mid 70's.  The rain didn’t make its appearance the entire time I hiked today, though I carried my umbrella most of the day.

I got to Honoraville at 9AM but found the post office closed. I hiked another short leg from a gas station a half mile west of town and when I got back there the post office was open, so I bought stamps as intended. Next, when I got the car to that gas station I filled it up with gas—was close to a quarter tank—and bought some orange juice and Reeses as ‘thanks’ to the owners.

I hiked several more legs, all down CR 11 in Crenshaw County, though the roads kept changing names and had a couple turns at stop signs. I found a "road-kill" ball cap early in the afternoon. This was my third fully functional cap in three days—I never mentioned it but I found two in one day on Butler Mill Road a couple days ago. Those were an Alabama ‘Roll Tide’ hat and a Mossy Oak camo hat that was badly sun faded. Today’s hat was a Walt Disney Studios ‘Paris’ hat and the label was indeed in French. But it was a black hat—not very appealing. None of these three hats is immediately going to supplant any of the seventeen in my rotation. Maybe I should start working on a second seventeen, since I now have six or seven ‘spares’.

When I got to the Centenary Church, mentioned in the guide information as hiker friendly I saw some ladies there so stopped in and asked them if I could park there tonight. Their pastor has long since changed—the guide info is a decade old at best. They gave me the new pastor's number and I called it and left a message but never got an answer. Despite that I decided to park the car there for the night, not in the church lot but beside the cemetery across the street. I might have gone on, since it had not yet rained a drop and I had only hiked 15 miles and there were still three hours until sunset, but I scouted ahead with the van and found no decent place to leave the car overnight unattended—certainly not one that would give me the confidence that the church does. By the time I got done the scouting there were some threatening looking clouds and they indeed had rain with them, so if I had hiked another 2.5 miles to a stream crossing with grassy flat shoulder (the next best option), I probably would have had some light rain by the time I finished that."

That's the end of the hike report from my personal journal.  Below is a map of the route with links to more of the photos I took.