Made it to Florida! - hiking Conecuh National Forest

It took fifty day hikes for me to travel on foot from the Appalachian Trail at Springer Mountain to the start of the Florida Trail.

When I reached the state line I found no 'Welcome to Florida' sign so I had to settle for a selfie facing back toward Alabama where the first yellow blaze is accompanied by a National Forest Boundary sign.  South of there I'm in Florida's Blackwater State Forest. 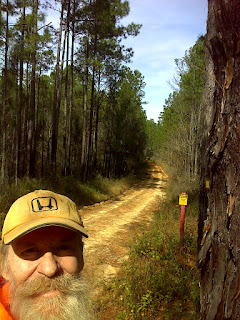 The hike through Alabama's Conecuh (pronounced 'ka-NECK-uh' by the locals) National Forest was mostly on lightly traveled forest roads, and nobody here mistook me for a 'broke down' ne'er-do-well.  One gentleman driving by did stop, but only to declare "Great day for a walk!" to which I heartily agreed.

The best part was the 2.2 miles of real Conecuh Trail - a 20 mile loop of footpath built by the Youth Conservation Corps starting in the mid '70's.  The part that the Alabama Hiking Trail Society designates as part of the walk from the Pinhoti Trail to Florida passed through Longleaf Pine Savanna - always a pleasure to walk: 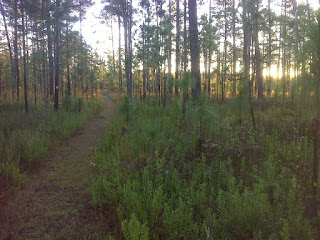 But the road walks in the National Forest were far better here than on paved residential roads.  I especially enjoyed very lightly used FR 355 near the north end. 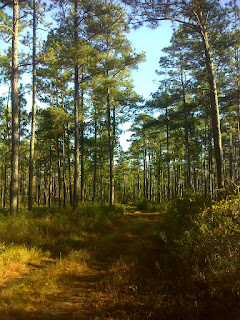 When I got on FR 305, which I was obligated to walk for eleven miles, there were some very pretty places.  Take this 'oak bower' for example. 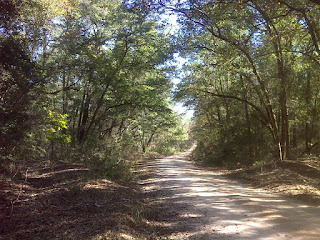 And there was a short side trip to picturesque Otter Pond 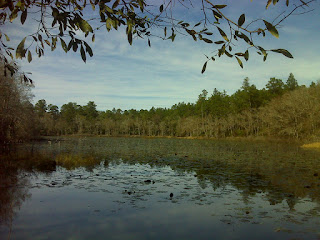 But by the time I got near the end, it just felt like a long, straight slog.

The next day, too, was just ordinary road, including a mile of paved road, before I reached the state line and the ... well, is it the Florida Trail or isn't it?

There seems to be significant confusion about that.  I've started down the Blackwater Spur trail.  The trail itself is now blazed blue, clearly recently overpainted from the original Florida Trail orange.  And there's a significant orange blaze right at the state line, even before hikers reach the welcoming Kiosk, visible in the background in this shot: 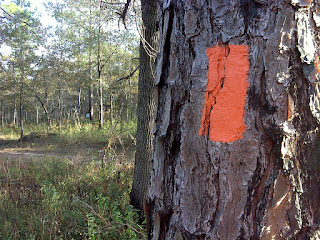 All the signs along the way--and there are big diamond signs at every major road intersection--say 'This is the Florida Trail'. 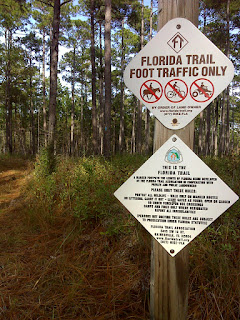 What's more, according to the Florida Trail Association hiking the Blackwater Spur instead of hiking the final western section to Fort Pickens counts toward their 'End-to-End Certificate.'

And yet the blazes were changed to blue.  That makes me feel like it's not a legitimate part of the FT.

Feeling legitimate means more to me than it might to some.  My sense of purpose is what drives me.  I'm 'hanging my hat' on the fact that if I hike Blackwater and then pick up the orange blazes at the trail junction in the little town of Harold, and head east, skipping the orange blazed section west along the beaches to the western terminus at Fort Pickens, I will, in fact, still be considered to have thru-hiked the Florida Trail.

My next immediate goal is to hike to my new residence at Keystone Heights, about halfway through the Florida Trail.  But my hope and intent is to go beyond.  In fact I hope to continue past the end of the Florida Trail to the end of the Eastern Continental Trail - to the end of US land itself, by hiking the Overseas Highway to Key West.  So from now on, my introduction to these reports (the day numbers will continue the same) will declare:

This will be a new adventure.  If the weather continues wet, there will be significant wading through swamps--and there may be impassable sections.  Let the fun begin!

Below are two maps of the days reported here, with links to more photos:

Crossing into Florida via the Great Eastern Trail at EveryTrail
EveryTrail - Find the best Hiking in Alabama
Posted by PJ Wetzel at 3:38 AM