Blackwater State Park and the dreaded road walk on US 90

I've made it to Crestview, FL and am holed up in a motel.  I will be getting off the trail for the Thanksgiving break, taking more zero days than I'd like because of real world snags and snafu's.  I don't bother readers with this sort of stuff unless it makes an entertaining story.  In this case it doesn't.

So as usual I'll stick to describing the trail and my experience with it - who and what I saw and what they made me think about.

I saw Blackwater River State Park and hiked the last of the Blackwater Spur Trail.  The park was far more humdrum than I expected - really quite an anticlimax.  There was the view of the river from the walkway over Deaton's Bridge shown above, but otherwise there was just routine woodland and a boring walk along a service/maintenance road. The river was high but not so high that I had to get my feet wet anywhere.  It did, perhaps, help make this little hidden reflecting pool a prettier sight. 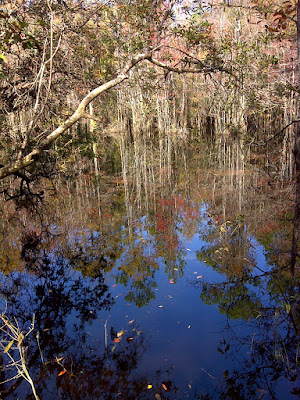 The most interesting part of the 'foot traffic only' part of this hike was the man-made stuff, specifically a freshly clear-cut Longleaf Restoration area with tiny little Longleaf seedlings getting themselves established. 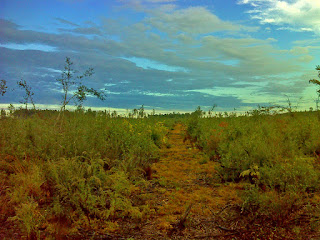 Then I began the road walk.  Almost immediately, in the little hamlet of Harold, I came upon the first real orange blaze at the junction of the Blackwater Spur Trail with the honest-to-goodness Florida Trail.  Not much to look at, but this was a 'Florida Trail or Bust' milepost for me. 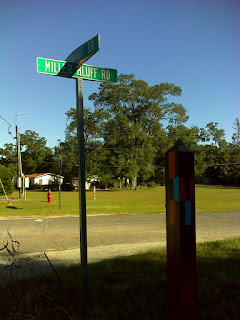 I had not been looking forward to walking along busy US highway 90 with its 60-mile-per-hour speed limit and the roar of log trucks and other eighteen wheelers, but there was a surprise waiting for me, and the orange blazes helped me to understand and utilize it: 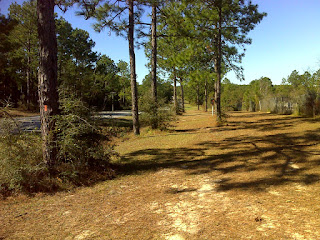 There is a very wide public right-of-way beside the highway.  It's grassy and consistently well mown except in a very few wet spots.  It's level and easy to walk, and it's well away from traffic ... that is, from rubber-wheeled traffic anyway. 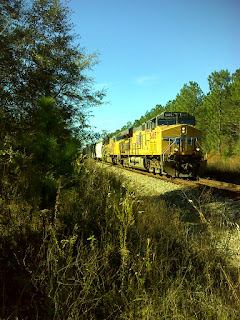 They're building a new bridge over the Yellow River, but getting through the construction zone was no hassle.  It appears that the new bridge makes no special accommodation for foot or bicycle traffic, and that's a disappointment. 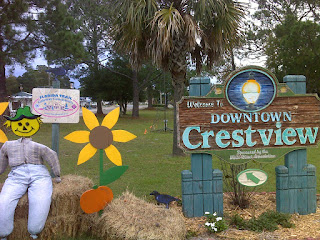 It's a quiet downtown - not a lot of tourist hype.  Honestly, most of the action is on US 90 and FL 85, and there's a big mega-church in downtown that treats Main Street as if it was a back alley.  But farther north they've spruced up the street with ornate lamp posts and nice brick paving. 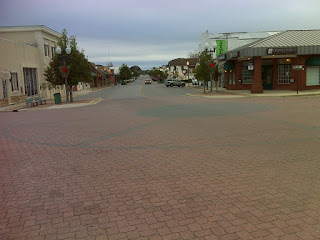 The north end of downtown is where the government buildings are, and the war memorial.  It's the elegant part of town - for me it was the best part of the 4.2 miles of sidewalk walking that Crestview provides. 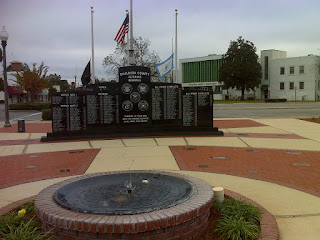 I'll be back in Crestview in less than a week, and starting the walk though Eglin Air Base - more foot-travel-only trail!  Yay!

Below are two maps of the hikes covering the western and the eastern half of the road walk, and there are a few more photos to see.