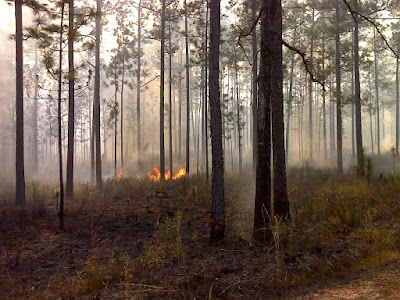 
The Firemen of Blackwater State
Have a rather unusual trait:
It's their fondest desire
to set Forests on Fire!
(And to let the poor thru-hiker wait.)
﻿

Sandra Friend and John Keatley warned me in their Florida Trail Guidebook:  Beware the Firemen of Blackwater State Forest.  They're likely to burn the trail any time of the year with little notice.

That was their plan on this day, and I was totally oblivious to it.

I was hiking directly into a death trap.

Fortunately one of their advance-men - they guy with the bulldozer who's responsible for putting in the fire lines - passed by and noticed me parked in a spot that would be nothing but cinders and ash two hours later.  He guided me to a safe place to park and pointed me in the other direction along the trail - away from the prescribed burn - because the section I wanted to hike was going up in flames.

That was Day 52.  I hiked just five miles - all north of the fire zone that day - then checked out the progress of the Fire Men's work (photo up top and below), deciding to take the rest of the day to scout ahead and rest, so that I could hike through the fire zone the next day rather than do a boring road walk around it. 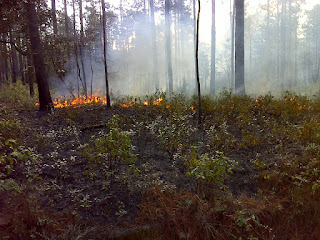 So the next day I got the reward - a hike through still-smoldering woodland. 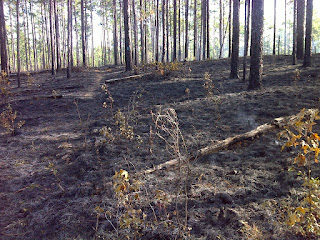 Longleaf Pine trees, as a species, depend on fire.  It suppresses their competition.  They've learned to tolerate fire better than most other tree species.  But this day I learned that not all individuals benefit.  I passed two mature Longleaf trees like the one shown below, that had some vulnerability near ground level.  They burned and fell over in the night.  They were still burning when I passed. 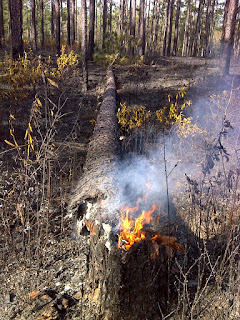 The occasional individual is sacrificed for the good of the community.  That is one of nature's tough lessons.

The rest of Day 53 was equally rewarding.  I hiked the Juniper Creek - Red Rocks section and encountered what surely must be some of the most rugged terrain that Florida has to offer.  This is Florida's answer to the Grand Canyon--thirty to forty feet of vertical drop! 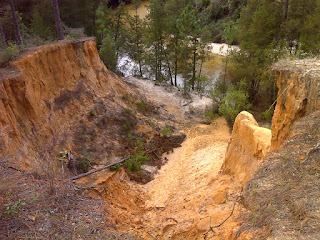 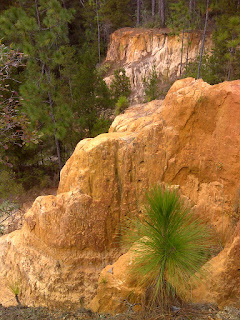 I hiked past some late season carnivorous pitcher plants, still trying to lure bugs into their trap with gaudy coloration: 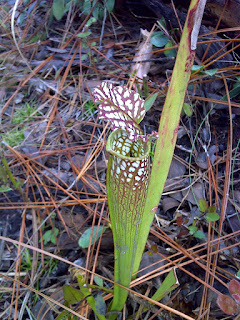 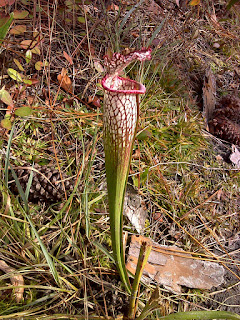 And I hiked many miles along the shores of Juniper Creek.  It is a wonderfully clear stream, with a white sandy bottom. 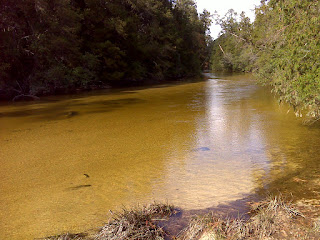 And the white sandy beaches abound - there's one at every bend in the stream. 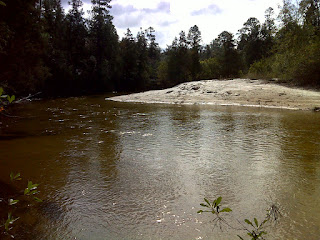 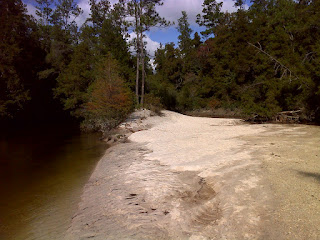 It felt like a very rewarding day.  I felt fulfilled ... satisfied ... even lightheaded, as if I had crossed into some timeless realm where I could witness the master builder him/herself at their eternal work.  But in the end he/she brought me back to reality with one simple expressive sight.  "Be not content at what has been shown to you, for it is not the end of wonders.  Seek on, young pilgrim.  There are many more questions you must answer," declared this modest young Longleaf Pine. 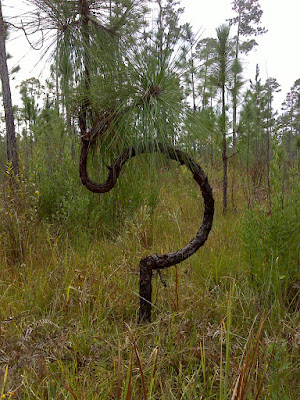 And I walked on in silence.

Below is the map of these two days of adventure.