I found it.  I found a big chunk of the original Shut-In trail between Buck Springs Lodge (the high point where it starts right at the stable area behind the lodge) all the way down to Elk Pasture Gap where the MST finally actually follows the old original Shut-In trail from there to the base of Ferrin Knob.  From there on east to Asheville I have no idea where the original trail went.  Even the memory of it seems to have disappeared.


Okay, back to the great news.  Following a clue from a park ranger and hints from a close up look at the Google Maps in 'terrain mode', I found the old original road bed. (You can see more of the trace on the map below.) It takes off in both directions from Buck Springs Overlook, yet the MST doesn't use it.  Going westward the nice, seldom used but well-groomed grassy trail, with old mossy stone work, leads to the stable area.


And from the stable there are very lightly-used steps that lead up to the lodge site itself.  None of this has any signage identifying it.  The park ranger told me it was there, or I never would have known.  It is as if they are deliberately keeping this pretty space a secret. 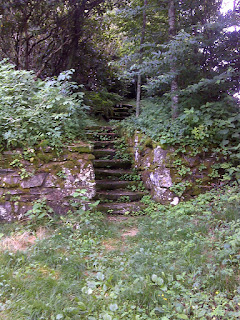 In the other direction from Buck Springs Overlook the wide road-bed is also well groomed, and follows a gentle grade down until it abruptly ends right above the Buck Springs Parkway Tunnel. 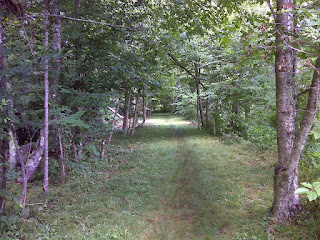 From there to the Little Pisgah Ridge tunnel about a half mile beyond, the old road bed has been completely obliterated by the parkway construction.  But then there's another perfectly preserved section of the old Shut-In trail route around Little Pisgah ridge.  It departs from the parkway right at the upper end of the next tunnel.  Note the yellow blaze on the rock. 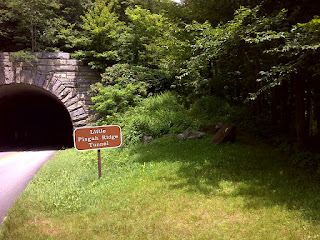 Half of this remnant of the original road bed is now used by the lightly traveled, yellow-blazed Little Pisgah Ridge trail.  The old deep cuts into the bedrock are visible here just as they are in the lead photo up top. 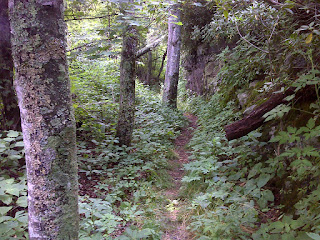 But that trail abandons the road bed and drops down the ridge line.  From there I had to bushwhack along the still-obvious wide road bed with deep vertical cuts into bedrock until it came under the influence of the Parkway construction again and appeared to be covered over by the tailing debris from the new road up above. 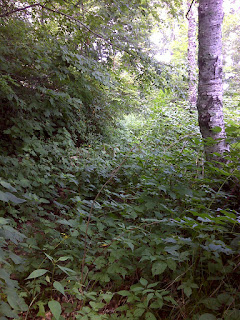 That's where I ended my exploration, having established my 'proof-of-concept'.

So ... WHY!  Why does the MST fail to follow the ***REAL*** Shut-In trail here?  It could not have been any easier to cut new trail up and over Little Pisgah Mountain's pointless summit (with no views).  And why did they put a sign identifying the Shut-In trail at the start of that imposter trail, yet fail to identify the real trail with any signs at all?  My answer -- there's probably a disconnect between the majority of trail builders and users and those few who cherish history and the provenance of the trails they walk.  For most hikers, I suppose, trail is trail.  An old, venerable carriage path that has been in continuous use for nearly a century and a quarter is still just a boot-worn yuppie walkway through the woods.  Kinda makes me a little sad.

Here's the map of the bit of unheralded original Shut-In trail that I explored today.  The red 'pins' are links to a bunch more significant documentary photos.  Check them out.