I'm back in the high mountains after a two week break to take care of business and then to follow the US Women's National Soccer team as they won the World Cup.  Yay!  Women's soccer is near and dear to my heart because it was by becoming a soccer dad, when we found that my daughter had a natural skill at the game, that I developed an interest in and eventually a love of the game.  Before she played I had no more interest in world football than the average American, which is to say 'next to none'.

Anyhow, to the subject at hand.  This report covers a few days of hiking, some of which I did two weeks ago, but most was a long 18 mile day hiking remote winding trail for 12 miles one way and the Blue Ridge Parkway back to the start.

This section of trail is little used, and as I walked it I was imagining that this was probably like the Appalachian Trail looked back in the 1950's when pioneers like Earl Shaffer and Emma Gatewood hiked it.  And it drives home all the problems with trail over-use--erosion being one of the major ones.  This was much more of a bona-fide wilderness experience, and I felt blessed to have experienced it.

Scenery was secondary to the up-close experience along the trail.  Summer wild flowers were abundant, including the rosebay rhododendron.  Here's a sampling. 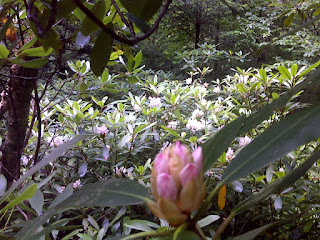 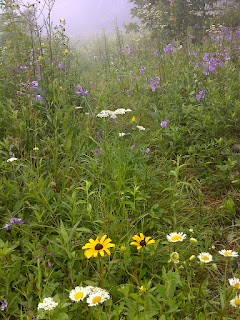 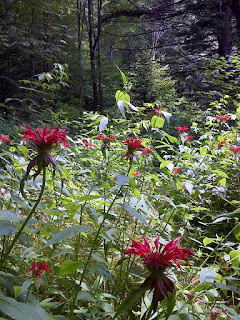 Part of this hike was in Middle Prong Wilderness (yes, it's Pisgah National Forest - I crossed this jurisdictional boundary near the end).  They don't allow trail blazes in wilderness areas, so finding my way was a bit of a challenge.  But I did run across this sign--must have been 'grandfathered' in. 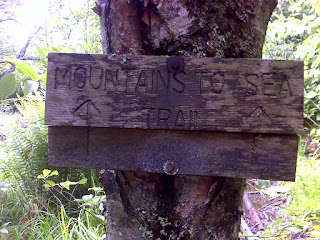 Where possible, I'm hiking short segments of trail and trying to find all the viable side trail access points.  One of them, I think, turned out not to be such a good idea.  The Art Loeb Trail connects from the Blue Ridge Parkway to the MST in just 0.19 miles.  Sounded like a good prospect.  Problem is that in that 0.19 miles the trail climbs more than 300 feet up to a nearly sheer cliff visible from the Parkway.  The trail follows the ridge line seen in this shot.  The trailhead at the parkway is just right of center. 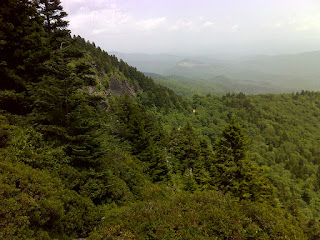 And here's the view from the top.  I could have got a better shot, but was afraid to get closer to the drop. 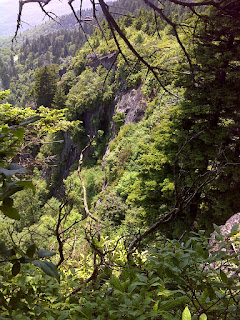 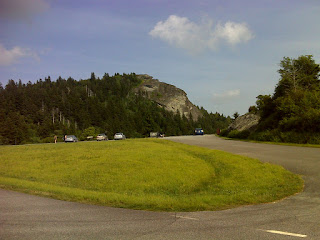 Finally, here's an art shot.  Can a forest be so verdant, thick, and alive that it looks dead (from underneath)? 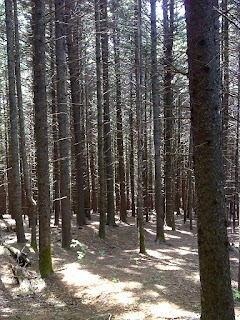 Below is a map of the meanderings covered in this report.