﻿
As I wrote at the end of yesterday's post, after 36 hours of travel without sleep I crashed in my motel room about 9PM without even turning the lights out.  I slept like a baby for nearly eight solid hours and woke up at 5AM refreshed and ready to go and full of plans and excitement. It was still dark so I got on the laptop and did journaling and downloaded and processed photos. After 45 minutes browsing around the internet it was finally light outside so I went out for a walking tour of the several-block-long beach sidewalk in the little town of Bahia Inglesia (English Bay), taking some photos from the rocks right in front of the hotel, from which it gets its name (Rocas de Bahia).  I had the beach all to myself.  It's always cloudy here in the mornings until the marine layer burns off. 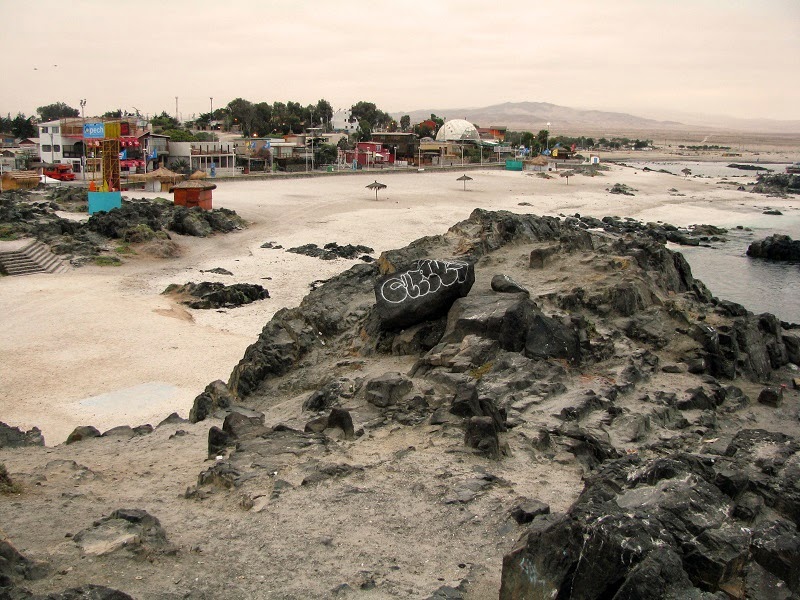 Back at the hotel I checked out the buffet breakfast but didn’t partake because I had already filled up with snacks from my suitcase.  I left at about 8:30 and drove north 7 km to the more substantial town of Caldera. I roamed the town for a very long time looking for a gas station without success. Finally I saw one out on Rt 5--the main highway (actually the Pan American highway running north-south through all of Chile and all of South America). Even then it took some navigating to get to that station because the highway has only limited access to the streets of the town. Finally I got there and bought gas--they don’t have self-service so a guy pumped it for me. From there I headed south and inland to Copiapó, a town or small city more then 10 times the size of Caldera and 100 or more times the size of Bahia Inglesia, 70km away.

A couple notes about Copiapó:  The name may be familiar to many of you because just seven months after I was there a high-profile mining accident took place, where 33 miners were trapped deep underground for 69 days before being recovered alive.  Copiapó is a major mining town.  Its name means “golden chalice” or cup [Copa in Spanish] of gold [Yapu, presumably in indigenous language].

I first drove the length of the city and found the turn off to San Francisco Pass (my first mountain hiking destination) and drove that road for a few kilometers. The last gas station is right at the intersection--this was of logistical importance since I would have to make it up to the Pass and back without refilling.

Back in the city I spent way too much time navigating the maze of downtown streets, almost all of which are one-way and poorly labeled, looking for the Aventurismo office. It took me about an hour to find it, and I had trouble even after I had asked for directions. I finally found it only after finding the correct block based on house numbers, parking, and walking two blocks on foot. When I got to the office I found nothing but a small hole-in-the-wall with a desk and plenty of clutter.  At the door I was met by gentleman about my age or even older.  He spoke English well--first person to do so whom I’d met since I left Santiago. He was very helpful - signed me up and took my $160 permit fee and helped me fill out the 4 page form that will be needed at Laguna Verde where I would be based for several days of hiking and acclimatizing to altitude.  His office has a permanent presence at the camp site by the lake--somebody who will be my contact and support there if needed.


Anyhow, I was out of there around 1PM then I drove the city some more trying to find the grocery store that he had pointed out on a map. I never found it, and to my dismay traffic was now much heavier and the one-way streets even more baffling. Worst of all, there was no place to park in the city center area where the store was supposed to be. In retrospect I would have been better off just keeping my car parked where it was and making my way around on foot. This town, and the town of Caldera, have more of the third world flavor reminiscent of Bolivia, so my first impression of Chile as being more modern and progressive was probably skewed, given that it came only from views out an airplane window and around airports and the expensive tourist town of Bahia Inglesia. I finally gave up on downtown Copiapó and headed back north, stopping at a gas station that the guy recommended to me because they had gas cans for sale. Indeed they did, so I bought a small 10 liter one.

I had decided to try the more manageable town of Caldera in order to find a place to buy my food supplies. And indeed I did. But even the central town of Caldera had confusing one-way streets. Fortunately it didn’t have parking issues, so I parked right on the main square near the one landmark--an old catholic church--and fairly quickly stumbled upon a nice sized ‘supermercado’ that took my credit card. The building was big but inside it was quite sparsely stocked. There was no canned meat besides tuna, and little other selection, so I was limited to buying crackers and cookies of various sorts, plus two foil pouches of ready made Italian spaghetti sauce for some vegetable matter. I would have to rely on my powdered milk for protein. They had huge 5 liter bottles of water there so I bought three of those. That figured to almost 3 liters a day for my time up at altitude.

After shopping I had finished the required prep work for this leg of my adventure.  I returned toward Bahia Inglesia, but since it was only about 2:45 in the afternoon, and I didn’t want to just settle into my hotel room yet. So I set my sights on trying to get to the 1000 foot high plateau-topped massif called El Morro Norte that is right on the ocean across the bay from my hotel. I was very pleasantly surprised to find that not only was it easy to get to, but that there was a sign right on the main road pointing out formal maintained hiking trails, one of which goes to the summit and one of which goes around the north end of the point. The latter is called the 'Traces (or footprints) of the Monkey' though I never found out why.  All these trails are part of the country's 'Heritage Trails' project.

I drove a short way in on an unimproved road that was full of “corduroy” bumps but passable, parked, put on sun screen and hiking boots and headed up the mountain. The 900 foot climb seemed like nothing at all--much too minor a workout. I got to the peak quickly (the view back eastward is shown at the top of this post), but didn’t realize I was there until I had hiked on for a couple of miles north along the plateau looking for the actual highest point, for a good view west to the ocean, and for a good view of the north end of the plateau. The desert vegetation was sparse but varied.  The picture up top shows a good representative sampling.  The biggest plants were a variety of cactus (at right).   When I reached the steep drop at the north end of the peninsula, I found the view west to the ocean was limited. I gave up and made my way back to where the trail ended at a high point and a little fenced enclosure holding some equipment.

I got back to my car around 5:45 and drove back to the hotel, stopping at an uncrowded public beach well away from any development.  Vehicles are allowed on the beach here, so I let my rental car catch some rays. 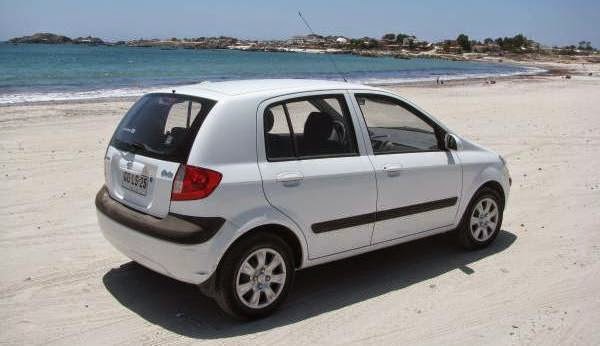 Back at the motel I made a reservation for next Wednesday night--the night before my flight out. The young clerk on duty spoke decent English--a rare and useful resource.  By then the maritime layer clouds had begun to move in again, and the crowds at the beach were thinning out. But there is a pretty decent night life here. In fact, because of the dreary mornings it’s quite clear that everybody gets up late and goes to bed very late around here. Even little kids were still up and active at midnight.