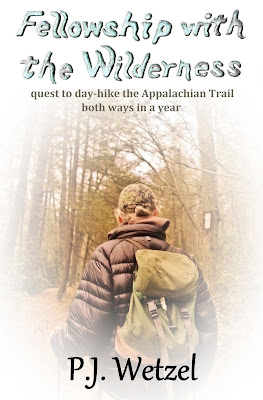 ... and soon after that, a visionary work of speculative sci-fi/fantasy that asks the questions:
What if our universe is a conscious living thing—not a supernatural disembodied mind, but a real, detectable physical being, who we just don’t have the tools, yet, to detect?

What if this universe-entity isn’t alone?  What if she lives in a thriving, evolving community of universes (the ‘multiverse’). She was born of a parent universe, interacts with fellow members of her ‘species,’ and hopes to have children that become full-fledged universes themselves?

The idea that our universe could ‘beget’ child universes isn’t rooted in Fantasy, but in solid theoretical physics.  Papers published in peer reviewed Scientific journals demonstrate that not only can our universe produce offspring, but that the reproduction process would be subject to quantum-noise mutations. This is a compelling way to explain how our universe happens to be so exquisitely, impossibly ‘fine-tuned’ to support life. What if our universe evolved to host life because life had a role in steering its evolution?

This the underlying premise of the ‘Eden’s Womb’ novel series.

So, what might that über-world look like—the place where all those universes live and reproduce? In ‘Eden’s Womb’ it’s called ‘Flat World,’ and it really is flat, with a cliff at the edge. Worse, our particular universe finds herself teetering right on the brink of no return—She’s at risk of losing her grip, being swept into oblivion, and taking us with her. That’s why we observe our universe to be flying apart at an alarming, ever-increasing rate.

Physicists don’t know what that mysterious energy is that is pulling the galaxies apart.  They call it ‘Dark Energy,’ and for now they assign it a constant value.   In ‘Eden’s Womb’ it is called the ‘Death Wind’ and it is anything but constant.  Our universe hopes to escape it, to reach a distant haven of calm and warmth and peace that she sees as only a faint glow on the horizon of her flat world.  But she will need help in her quest.  It seems that we humans have the power to control the Dark Energy in the same sense that life itself can locally counteract the infinite, random Chaos in which we exist.

Right now there is only Earth.  Right now our universe is extremely young, just 13.8 billion years old.  If we’re willing to do the work, we can help guide our universe toward a stable, balanced existence that would guarantee trillions of years of sustainable intergalactic civilization.

How?  Learning that answer is just part of the massive, epic quest that young Adam TimberFell is called to undertake.

The legacy of PJ Wetzel is best found in his writings.  This blog has long been the informal storehouse - the pantry, so to speak - of raw ingredients: his experiences, thoughts, and beliefs.  But he also wrote eight books that distill those ingredients into coherent messages.

The other seven books are actually a novel that is too long to fit in a single book.  Eden's Womb gestated for over fifty years from inception to publication, and his hope was that others would continue to fill in detail, add back-story, and write character studies ('curated fan fiction').  In the tradition of oral story-telling, a real story is never finished.  It is a living thing.

Wetzel called Eden's Womb his life work.   It combines his vision of the future history of Earth with a rousing adventure and travelogue.  It fits in the genre of Fantasy, and yet there is no magic or supernatural content, only a startlingly distinctive new perspective on our very-real reality.  It is 'hard science fiction' without a central focus on man-made technology.  PJ believed Nature's technology is far more sophisticated.

Starting in December 2019 Wetzel undertook a comprehensive rewrite of the first two titles, Return of Naja, and Lonely Lessons; and he extensively edited and revised the other five books.  These are being prepared for print publication, but the first part of Return of Naja is now fully edited and chapters are being posted here as free previews.  The links below will become 'hot' as the chapters are posted.

Below is more background, context, and a summary of the novel.

If you take the time to read the “Paradox” page (the tab immediately to the left of this one), you’ll find that Wetzel developed a deep-current worldview that manages to explain how our universe came to be, where it came from, and where it’s going.  "Eden's Womb" is a high-energy fictional romp through this thought-space.

Think of it as a creation myth if you must; or think of it as creation physics, because every bit of it should eventually be demonstrated through observational evidence.  For now, though, it does lend itself to a wonderful, complex mythopoeia—an origin story that brings real, immortal Gods (transcendent beings) into an existential battle to control a simple mortal human's epic quest.

PJ writes:  "I've had that story rattling around in my head since the late 1960’s and it wouldn’t go away. As time went along, the goal of really actually writing that story found its way to the top of my bucket list. I wrote a whole bunch in the late 1980's and I resumed working on it in earnest after I retired. When I entered the first 20,000 words in the Maryland Writer’s Association's novel contest a few years ago, it won a cash prize in the Science Fiction/Fantasy category, and that was impetus enough for me to finish it and publish it.

"For successful writers, publishing a book is not the end of their work, but the beginning. Tireless promotion is the real key to success for virtually every writer I've ever heard about.

"What I did was write it.  The promotion happens here.  The seventh book, "Navel of Time" is as good a place to start as Book One, Page One.  I wrote it as a stand-alone story, but also a sequel, which encapsulates the basics of the plot of the first six books.

"Book Seven was a promise to one of my most avid readers—Frank Looper, whose comments you will find below.   Frank has been diagnosed with early stage Alzheimer's.  His family has a long tragic history of it.  I wanted him to get full closure to this enormous story, and I got it done.  He was a beta reader for this final volume."


Below is the blurb (teaser) and links to buy the previous editions of books II through VI.
These links will be replaced by the revised versions when they are ready. 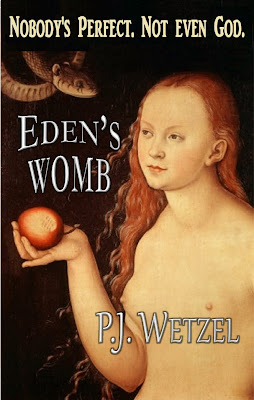 An epic sci-fi/fantasy tale set on far-distant-future Earth in the 'belly' of a conscious, living universe named Naja.

Homo sapiens has disappeared.  Six successor species vie for control of the world.  Up in "Heaven", the spirit world is disrupted by the unexpected return of the long-absent Naja.

Naja takes control in the Pantheon of the Gods
and on Earth she chooses an unlikely 'Final Messiah', Adam TimberFell,
who she hopes will do her bidding and rescue his dwindling species from extinction.

But neither Adam, nor many of his Ancestor spirits are cooperating.
Naja is growing increasingly desperate.
If Adam doesn't succeed, it is not just his species that will fail.  The 'Death Wind' would carry Naja into the irretrievable Void, where observable reality would cease to exist.

(Free preview of Book I above) 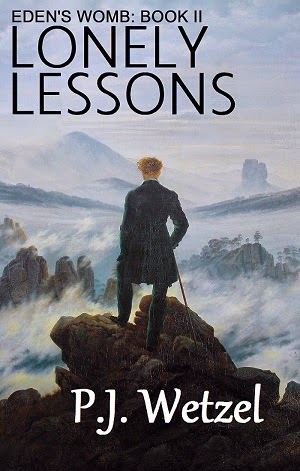 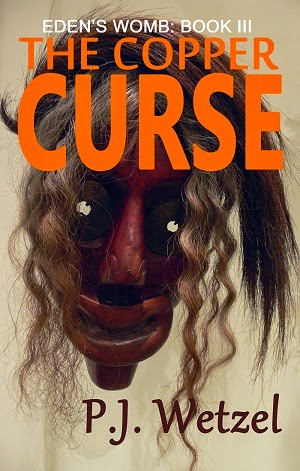 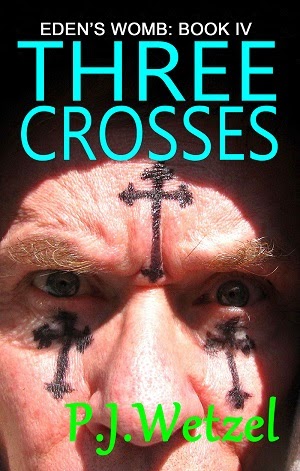 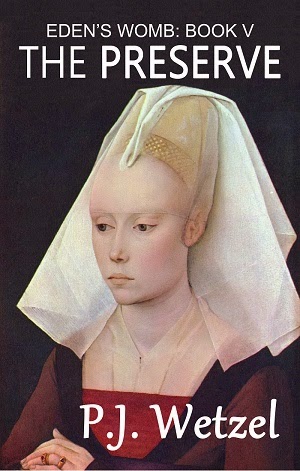 The Preserve: e-book for Kindle, 99 cents. 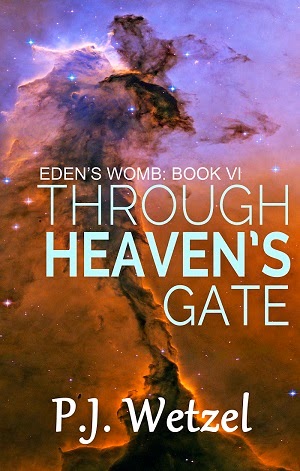 The Navel of Time, Book VII


The seven books of the Eden’s Womb tale are really one immense story, so don't expect closure at the end of each book. Many plot lines are left unresolved until the shock climax at the end of Book VII. And then … well … a real story never ends.

In the first book, Return of Naja we are introduced to the Goddess/Spirit named Naja who takes the form of a serpent and calls herself 'StrongMother'.

She claims she gave birth to the universe - big claim. She scoffs at the Judeo-Christian 'God', declaring that he can't be the Creator because "Whoever heard of a man giving birth to anything, let alone a universe?" She claims that this God, Yahweh, is actually the fallen Angel we know as Satan, that he gave her the image problem when he cursed the serpent for giving Eve the fruit of knowledge. She claims that the fruit was essential to the full functioning of a meaningful universe. (It would be boring without free will.) And she backs up her claim by noting that God set this trap in the middle of the Garden of Eden knowing full well that humans would take the bait, and yet God refuses to take responsibility for the resulting 'Fall'.

In 'Eden's Womb' the real 'God' - the 'Big Guy' - appears to stand aside and let this upstart Naja have her way. After all, the 'My God is bigger than your God' sort of ultimate God doesn't have the existential angst that Naja suffers from.

Meanwhile we have a young mortal human, just seventeen, who is privy to all the debate and consternation going on in the Pantheon of the Gods/Angels. Adam can hear every one of their voices. Unfortunately he can't filter their conflicting messages, so they're driving him crazy. The main message is clear enough though. This God called Naja wants him to become 'King of the Universe.' His reaction: "If somebody came to you claiming that they were hearing voices in their head, and that those voices were telling him that he is King of the Universe, would you believe him?"

Of course not. Problem is, this time it’s the truth.

Adam knows he’s not a lunatic. He even accepts that the voices are the real voices of the Gods. But still he rejects it all. All he wants is to be normal and to have the Gods leave him alone.

But Naja isn't going to take 'no' for an answer.

So … this sets the stage for some fun, some exploration of my ideas of cosmic origins, and a story of a good old fashioned cross-country hike—as Adam finds himself forced to pursue Naja’s demands that he save humanity from extinction and rescue the dying universe itself.

Enjoy - and don't be shy. Let us know what you think. Your input can make a difference, as Frank Looper’s did.
Posted by PJ Wetzel at 7:39 AM