Height of Land overlook south of Oquossoc, ME to East Flagstaff Rd. near Stratton, ME: 62.0 miles

General Impression/Theme:  The best of Maine, still tough hiking but with the biggest payoff in terms of scenery. 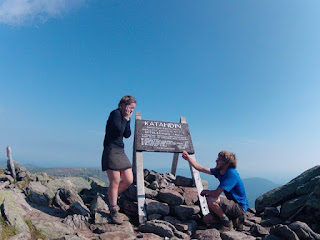 People:  Several meetings with thru hikers Micah 'Man Cub' Goldberg and Anna 'Kit Fox' Tucker.  I also met her father who is from Maine originally.  Micah had a surprise for Anna when they summited Katahdin a couple weeks after I met them.  Micah blogged his hike at 'Walk Outside'

Second meeting with Flip-Flopper 'Night Walker', hiking with a huge GPS unit (being paid by the ATC to take the data).  He was on the summit of Springer, March 31, and was the person who snapped my 'first white blaze' photo.  Flip-Flopping couple 'Mandela' and 'Terranauta' headed from Katahdin to Marion, VA.  Hiked with them for a while and learned that we had several mutual acquaintances, including Micah and Anna, who they had met long ago on Blood Mountain, GA.  German thru hiker Johannes from Munich, who I first met at Rock Gap near Franklin, NC.  Thru-hiker 'Lasagna.'  A day hiking family consisting of a high school science teacher who had lived in Ft. Collins, CO the same time I did, and his three children aged 9-21 out peak bagging N. and S. Crocker on a rainy day.

Supply/Overnight:  the IGA on the south side of Rangeley, Trailhead and overlook parking areas, The Wal-Mart in Mexico/Rumford.

Worst Memory:  The battery in my vehicle woke up dead one morning. I had to call AAA.  Turns out my laptop was sucking more juice than I had believed possible - had left it on overnight for three nights in a row and had run the motor very little during the intervening two days.  The Rangeley mechanic from RP Auto Body and Repair showed up quickly with a jump start then led me to his little shop on School Street, with no sign (everybody knows him), and took the time to give me a free diagnostic of the battery and alternator.

Best Day Hike:  There are two good ones.  Saddleback's open summit can be reached via a trail up from the ski lodge or via the AT from the big parking lot on ME 4 south of Rangeley.  Be sure to hike north as far as you can go beyond Saddleback to experience more great open rock-slab views from The Horn and even Little Saddleback.

But my favorite for this section is the Bigelows, particularly Myron H. Avery Peak (shown up top).  This can be reached from the south on the AT from ME 27 and from the north from East Flagstaff Road via the Safford Brook side trail.  If you have support or two vehicles, I strongly recommend doing this entire section.  The views of Maine's lake country are unparalleled anywhere else on the trail.  Similar views are available from Katahdin, and from Barren Ledges (see upcoming reports) but for me this hike is more pleasing overall, particularly because of the close encounter with, and great views of Horn Pond that are thrown in as an added bonus.