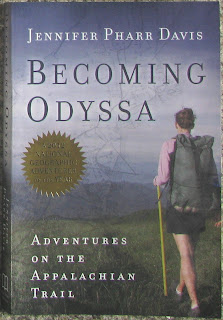 Jennifer Pharr Davis has thru-hiked the Appalachian Trail three times.  The first time (2005) she was a novice backpacker, fresh out of college.  The second time (2008) she set the unofficial women's speed record, hiking the trail with her husband's support in 57 days.  Then in 2011 she outpaced all the men, setting a new overall record for speed-hiking the Appalachian Trail, doing it in an astounding 46 days.

I always thought her trail memoir, 'Becoming Odyssa: Epic Adventures on the Appalachian Trail' was about her supported speed hikes, so I wasn't interested.  But no, talking with Laurie Potteiger at the ATC this October, I learned that it is about her first thru-hike, where Jennifer sets out to learn about herself and to set a course for her post-college life.  And Laurie highly recommended it as one of the most well written of the trail memoirs she has read.

Well, that was recommendation enough for me.  I bought it then and there.

The charm of 'Becoming Odyssa' is its emotional openness.  Jen shares her feelings without being gushy.  She shows her innocence (she was 21 at the time of the hike) without shame, and she shows her steel-gut strength at the same time.  Most of all, her writing conveys her love of the trail and of hiking ... hiking fast!

I picked up 'Becoming Odyssa' and couldn't put it down.  I read it cover to cover in under 24 hours.  Because I had just finished hiking the trail myself, the settings brought back vivid memories.  The consistent and readable writing style kept my interest.  There were touches of humor, and a few sub-plots with mesmerizing tension and human interest.

But despite expectations implied by the title, I didn't find this book to be primarily about a 'lost young woman finding herself'.  Jen started her hike with an unusually mature sense of self for someone that young, and with a firm faith that never wavered.  So the story conveys no overriding 'emotional/psychological journey', and therefore no strong unifying theme that runs throughout.  It's really just a travelogue, albeit a well-done one.

What you won't find in Becoming Odyssa is a lot of nuts and bolts advice or opinion (regarding gear, psychology, preparation, etc.), which many AT memoirs have.  Jen resists the urge to claim expertise. She hiked with an old external frame pack and a mop handle for a walking stick.  I found this very refreshing and endearing.

I've now read fifty Appalachian Trail memoirs, and I'd categorize all of them as primarily travelogues.  Only Bill Bryson's A Walk in the Woods takes a stab at transcending that orthodoxy, and it only succeeds during the first half of the book.  Interestingly, I felt the same sense of anticlimax in Becoming Odyssa.  She describes the northern half of the trail in just the last third of the book even though this part of the trail contains some of the greatest physical challenges.  I sensed that Jen was suffering from "Katahdin Fever", as most thru-hikers do: focusing more on 'eating the miles' and getting to the end, rather than smelling the roses.

Yet there's another reason why a northbound AT hike memoir 'tails off' near its end: simple exhaustion.  As I hiked the White Mountains of New Hampshire, and the Mahoosucs of western Maine, I found that the difficult trail left me with little energy for journaling at the end of the day.  The trail becomes a simple survival test, so the human interest stories and the inspirational descriptions and observations dwindle.

Despite the overall positive experience that I had reading this book, I have to object to one point:  Jen seriously disrespects Pennsylvania, and the towns of Duncannon and Port Clinton in particular.  Now, Pennsylvania's notorious rocks and reputed lack of views are the fodder for endless good-natured hiker jokes and even serious contempt.  But to flatly state that "In Duncannon, wherever I expected to see life, there was decay" smacks of stereotyping.  Just look at the scene I photographed on High Street as I walked through Duncannon last April 14th.  Excuse me: I see life.  In fact, this qualifies as the single most attractive Appalachian Trail town scene that I encountered anywhere on the trail.

When you 'dis' someone or something, your words usually speak more loudly about you than they do about the object of your disrespect.  In this case, Jen's view seemed to have been pre-conditioned by the opinion of trail legend Warren Doyle, who gave her the advice not to stop in Duncannon.  I'm left wondering whether Doyle (the man) had a bad experience at the Doyle (the hotel) back in the 70's, and hasn't bothered to revisit and re-evaluate since.

All things considered, though, I found Becoming Odyssa to be an excellent read.  If you read only two Appalachian Trail books in your life, this should be one of them.
Posted by PJ Wetzel at 6:44 AM