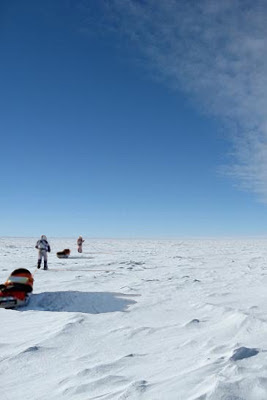 “And this shall be peace:
when the Enemy invades our land and treads upon our fortresses,
we shall raise up against him Seven Shepherds,
even Eight Princes of Men.”
—Micah 5:5


The contest-winning novel I’m working on, 'Eden's Womb',  is, in simplest terms, the story of an epic hike.  As the tale begins, a young man named Adam BrownEarth is launched on a desperate quest to rescue his kidnapped mother.  Through the difficult journey he discovers himself, as many of us who undertake long hikes do.  Reluctant and even resisting at first, he learns to accept and wield the rare gifts he was born with.

Adam's hike turns out to be six thousand miles in length, more or less; and it is filled with deadly threats and detours.  The journey begins with just a handful of characters.  Adam’s mother Trilly is kidnapped by a nefarious world traveler, and he and his best friend Perfid Sam, his erstwhile girlfriend Evvie, and his severely handicapped twin sister Lissa pursue Trilly's abductor across five hundred miles of ice sheet (depicted above).  The sojourn concludes with Adam leading hundreds of followers, including exiled Princes from the eight original centers of highest human learning and achievement, on a climactic Appalachian Trail ‘section hike’ from Pearisburg to DunCanon (as it is then spelled, meaning ‘Stronghold of the Sacred Word’ from the old Gaelic ‘dun’ meaning fort, and the Greek ‘kanon’ meaning code or standard).

But this is the far distant future: 635,039 AD.  The world has been overrun by post-human super-species.  Pearisburg is long gone, smothered deep in the realm of a mysterious queen who lives atop a granite pinnacle called The Priest, and DunCanon is now at the edge of the glaciers and is under attack from the post-human monsters.  It has become the last remaining of the eight original strongholds of free humans.

If DunCanon is to survive, ancient prophecy must fulfill.  This prophecy—indeed available to us today in Micah 5:5 of the 'First Canon'—declares that in the end-time the Seventh Shepherd will appear and drive back the Hoards of Armageddon.  In Adam's world, history had already identified six undying Shepherds, all of virgin birth, who transformed humanity and elevated human spiritual awareness in progressive steps as humans became ready—Jesus of Nazareth being the first of these.  The Seventh is to bring humanity to final perfect oneness with the Infinite Creative Force.  Some call this ‘The Rapture’.

Most of Eden's Womb is written and now in various stages of revision and refinement and is being posted here on this blog.  I hope you'll come along for the hike :-)
Posted by PJ Wetzel at 6:44 AM