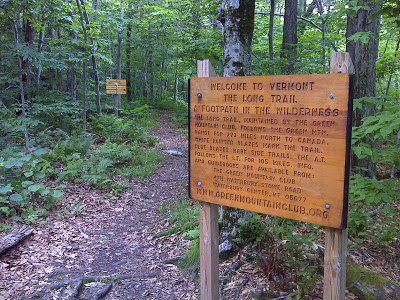 General Impression/Theme:  Long Trail.  This section of the AT 'piggybacks' on the older Long Trail for roughly 100 miles between the Massachusetts border and US 4 near Killington Mountain.

People:  'Twisted Knickers' and 'Matchbox' - headed north from Dalton, MA on a twelve day outing.  We crossed paths on at least eight of those days.  'Corky', headed to Katahdin, hiking in her Crocs, as always - kept up with her strong pace for about an hour one day and thoroughly enjoyed her company.  Thru-hikers 'Swiss Miss' and 'Alien', a couple from Switzerland doing the trail on a 6 month tourist visa.  More thru hikers: 'Whistler' and 'Two Cents' and 'Orange Lightening'.  On a break from the trail to take care of business in MD and NC I stopped in at the ATC office in Harper's Ferry and ran into thru-hikers 'X and N Trovert', husband and wife team who reached Katahdin on September 25th.  'X,' who lives up to her trail name, went to the same High School as I did and is the younger sister of my brother's High School buddy.

Worst Memory:  Two:  First, losing the trail temporarily in dense fog on the open summit of Bromley Mountain.  Second, hearing the news (while in Harper's Ferry) that a hiker died on the trail and then immediately learning that it was someone I had met twice on the trail, Paul 'Parkside' Bernhardt.  It felt like I had been stabbed in the heart - could barely breathe for a while.

Best Day Hike:  This was a tough choice.  Because of its overall appeal along the entire length of the hike, I'll go with the two mile walk to (and around) Little Rock Pond from Danby-Landgrove Road.  The trail follows a babbling stream among lush, dense vegetation for most of the way.

Close second, with a fairly long hike to get to the 'payoff', is the climb to Glastenbury Mountain fire tower from VT 9.  This is a wilderness area and the panoramic view from the fire tower is of a pristine landscape.

Similar fine views are available from the Stratton Mountain fire tower, accessible via the AT or from the adjacent ski area.

Finally Prospect Rock, a fairly short hike up from Manchester Center (or you can even drive up via Old Rootsville Road), offers excellent views of the Manchester area and westward.