We don't own this world.  You do know that, right?  Genesis 1:28 notwithstanding.  It is bought and paid for by things much smaller than us, much smarter than us (see below), and very, VERY much older than our human "civilization".

For example: An estimated 10,000,000,000,000,000 ants swarm this planet at any given time -- coast to coast, sea to sea, on every continent except Antarctica.  They control nearly every square inch of land, including places we don't care about.  They've been fine-tuning their culture for at least sixty million years, and possibly as much as a hundred million years.

Now … if your civilization had been 'intelligent' for sixty million years, you would probably have figured out what the person next to you is thinking just by their smell (pheromones) and by their body language.  Talk is … well … really, REALLY cheap (inefficient) as a form of communication.

So … if you're looking for that hyper-advanced civilization -- the one that is so totally beyond our level that they barely notice us, so secure that they consider us no threat, and so dominant that they have no need or wish to communicate with us, you need to look no further.  Think about it.  What could ants possibly learn from us that would improve their lives?  How to crochet a doily?

Among the ant colony's scrupulously organized system the worker class is tasked with maintaining and expanding their underground system of tunnels and nativity chambers and fungus gardens.  Planet Earth would not be the same without the ants' tireless aeration and overturning of the soil.  The things that grow in that soil have come to completely depend on the action of ants, and we, of course, depend entirely on the things that grow in the soil.  Remind me again -- who's in charge here?

The next time you call the exterminator, stop and think for a moment. Think about just how dependent we all are on the ancient civilizations that long preceded us.  On the web of life that has been weaving its intricate tapestry for billions of years.  Ask yourself: "What are *we* doing to sustain the interdependent system that sustains us?"

It's not the ants who are the pests.

Okay, thanks for reading.  Now it's on to the 'enterprise and adventure of the day'. 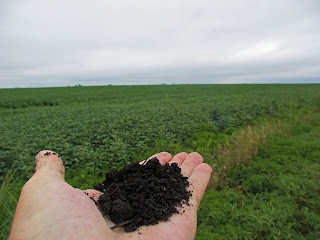 Conrad Iowa styles itself as the Black Dirt Capital of the World.  The soil here looks and feels like the stuff that comes out of a bag sold at a high-end nursery.  Or out of your meticulously overturned compost bin.  It remains the richest soil on the planet, though it is slowly disappearing under our stewardship.  When westerners arrived here in the 1850s to start farming, the black dirt was two feet thick in places (thanks, in no small part, to the constant overturning of ants and other critters).  Now there are only six to nine inches left.

Part of the reason the soil got so rich and so thick is that the flat terrain (an ancient sea bed) meant there was next to no erosion.  Each generation of grass died and left its remains behind for the critters to process.  Fire and dust storms brought nutrients from distant reaches.  The climate is harsh, but the land was a paradise, an American Serengeti.  I *so* wish I could spend an hour as a 'time tourist' here, to see how this land looked before man arrived. 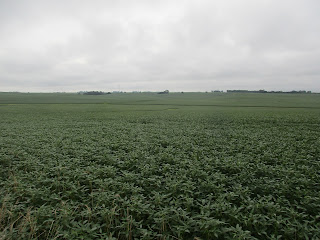 What I do get to see is mono-cultures of corn and soybeans, horizon to horizon, with the occasional token restored patch of wetland or prairie with a 'do not spray' sign along a road shoulder.  In the middle of a lot of road walking I got to hike a piece of old railroad grade on a trail called the Comet Trail. 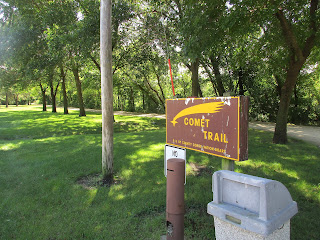 Often the old rail corridor was left untouched, and without fire to suppress the vegetation, trees have proliferated, creating a pleasant shady corridor for hiking. 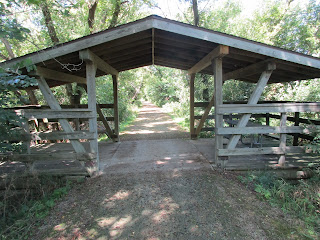 It's hopelessly artificial and out of place here, but it "shore is damn purdy."  It's what the state of Iowa has chosen to call "Nature Trail."  Hmmmmmmm. 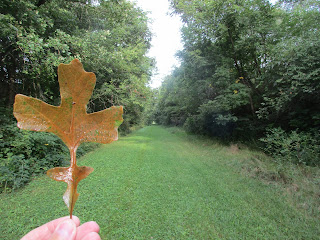 Out on the road, I look for distractions.  Things that break up the monotony of "corn, wheat, flat, repeat". 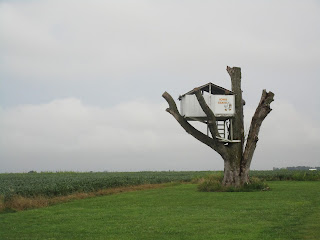 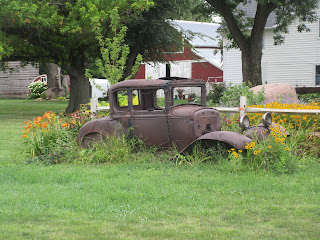 When I get to a town or city, there are plenty of nice distractions.  I digressed from the American Discovery Trail route in order to cut a road walk in half and add the town of Marshalltown's seven-mile Linn Creek Greenway Recreational Trail to my route.  (Why the ADT skips that, including a campground at Riverview Park, eludes me.) 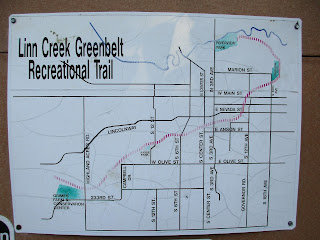 Bunches of paved trail and diversity of scenery: 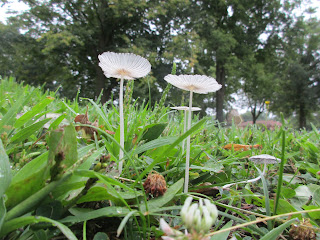 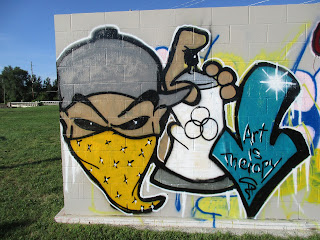 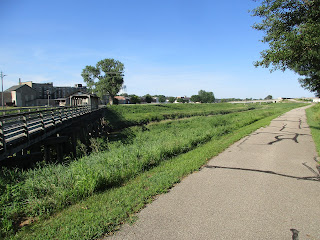 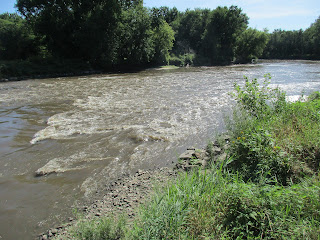 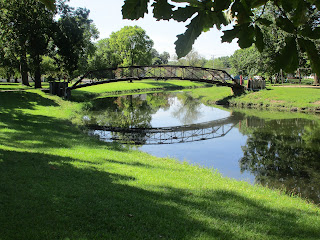 Okay, finally, here are the GPS tracks for the four days covered here. 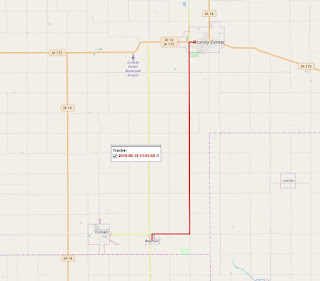 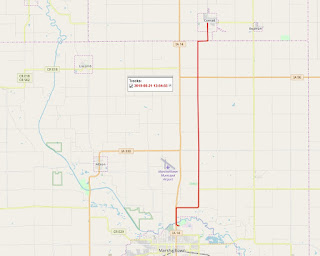 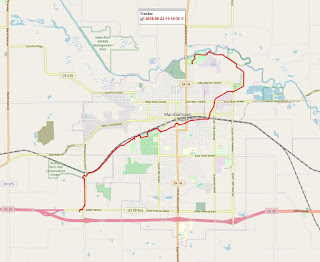 The people of Iowa are peaceful, respectful, friendly, and happy with their place, as far as I've seen.  What humans have built here works.  But I think it's all built on that inherited, millennia-old black dirt.  What happens when it's gone?