Hiking Patagonia, Part Two, the Base of the Towers


People who hike only one day in the Southern Hemisphere are most likely to do this hike.  It's a well-trampled trail and was very crowded on the Saturday that I was there.  It's moderately difficult - almost 13 miles round-trip from the trailhead parking area (complete with gift shop and restaurant), with 2500 feet of elevation gain, most of which happens in the last few miles.  Having hiked only level beach hikes for months I found that my climbing muscles had seriously atrophied.  This hike turned out to be nearly all I could handle.  Worst of all, the weather was not cooperating.

Our group, two American couples along with me and our guide Javier, were on the trail before 8AM.  On the lower slopes, under cloudy skies, we had views back to the lowlands to the south, with the showy Fire Bush putting on its display. 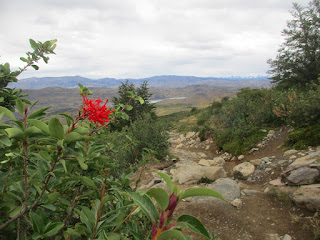 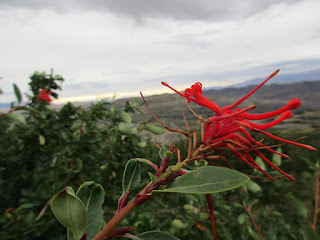 Fire bush is a favorite sweet nibble for the horses, so they are more commonly seen at a distance from the trail.

We ascended about 600 feet up to Windy Pass, where we could see the route ahead leading back down to the Refugio in the woods beside the noisy Ascencio River. 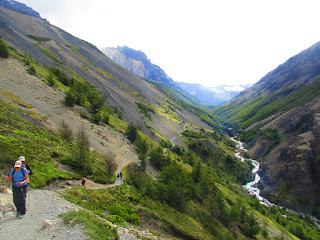 The Refugio, a back-country pit stop, comes complete with picnic tables, a store, restrooms, and plenty of campsites.  It was there that the rain started in earnest.  We continued up the river valley through the forest of Antarctic beeches of three species.  Here and there we caught a few splashes of the upcoming fall color, which would be in its full glory in about three weeks. 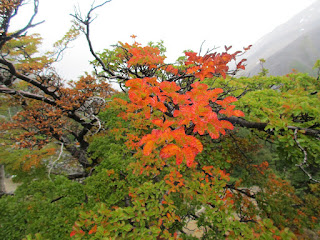 The climb began as we turned left, leaving the river. 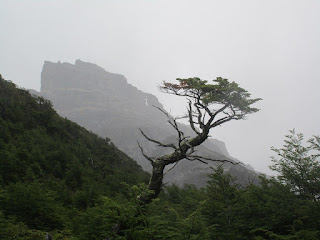 Our group was splitting up, with one couple ahead of me and one behind with Javier.  As I approached the viewpoint the faster pair, Sam and rail-thin Lorrie, passed me, heading back down.  They said it was too miserable up there and there was not much to see so they were retreating to the woods to have their lunch.  I headed on up and recruited a stranger to take a few snapshots of me with what little view there was, 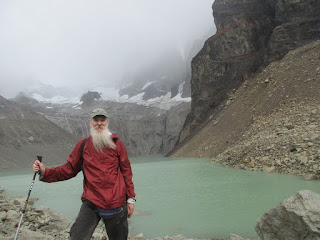 then I too headed back down.

I didn't get far before I noted the patch of blue sky off to my left.  I thought to myself "I'll never get here again, why hurry away?" so I turned around and headed back up, arriving just as the clouds parted. 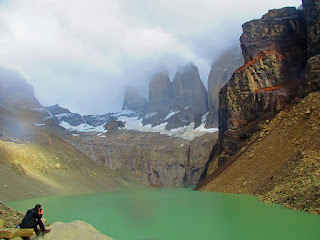 Or as much so as they ever do here.

I wandered around taking photos, then spotted Javier with the couple from San Francisco. 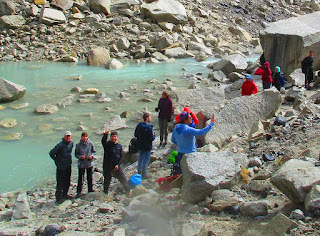 Sam and Lorrie soon returned too, and we all had lunch together beside the lake and I got my moment in the sun. 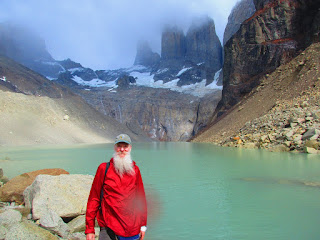 On the way down the trail was so crowded that it felt like rush-hour on a DC freeway.  We were cued up waiting to get through narrow spots.  But the scenery was gorgeous, now that the sun had won out over the storm clouds. 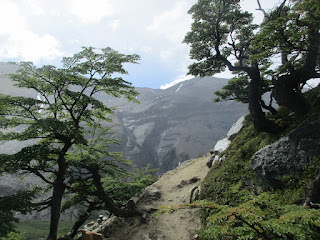 The beech trees here have a semi-parasitic free-loader known as Chinese Lantern.  Similar to mistletoe, it photosynthesizes its own sugars but relies on the host tree for its supply of water. 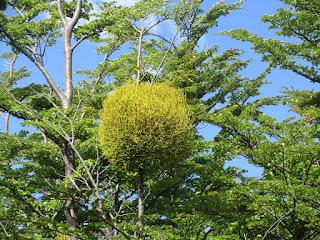 The scenery had opened up beneath the blue sky. 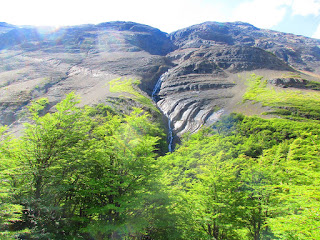 But as afternoon rolled on and we returned to the valley, crossed the suspension bridge over the Ascencio River, it was getting cloudy again. 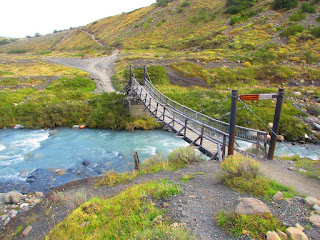 Back in the parking lot we rested and had a snack and were joined by a beggar, a young crested Coracora, which is a common local scavenger and predator, second only to the Black Breasted Eagles and the mighty Condors. 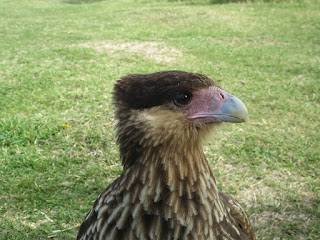 I was bushed, but very satisfied with the day as we made the 45 minute drive back to the hotel.  Next day my thigh muscles were sore.  What a softie I have turned into.  But I could relax and recover later.  There were more hikes to do.  Stay tuned.
Posted by PJ Wetzel at 4:41 AM