If you're going to hike in the Southern Hemisphere, the mountains of southern Chile have to top the list of destinations.  It's a hiker's mecca.  And arguably at its very epicenter is Torres Del Paine National Park.

I didn't come to Patagonia specifically to hike, but how could I *not* take the time to explore this bucket list destination.

This report covers my grueling three-day journey to get to Torres del Paine - five flights followed by a four hour drive - and the a glorious afternoon hike from my motel, the Tierra Patagonia, down along the shores of Lake Sarmiento.

As usual my photos, with captions, will tell most of the story.  It began with a final sunrise from my Topsail Island, NC condo, with a prophetic glimpse of a high-flying jet, no doubt headed to some exotic international destination of its own. 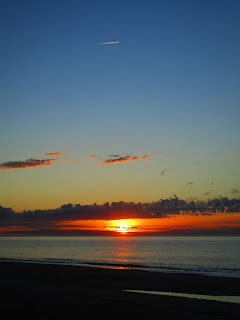 First leg took me to Charlotte, then the second leg presented some interesting scenery, as I had a window seat.  First we passed over an old hiking venue of mine--the Overseas Heritage Trail through the Florida Keys.


Then, passing another string of coral keys east of the Isle of Youth, Cuba, I captured this view, complete with what we meteorologists call 'cloud streets' because of the resemblance to city streets lined with buildings. 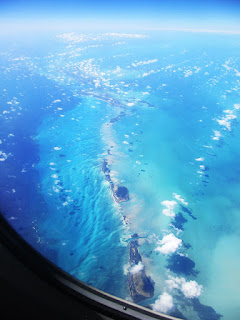 Finally we arrived at Costa Rica, where they were at the end of their dry season.  The hills approaching San Jose looked pretty parched. 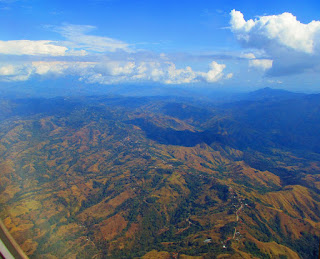 My flight schedule, tailored to save a few bucks, gave me eleven hours in the San Jose airport and a chance to watch a nice sunset.

Then it was on to Bogota Columbia via a pre-dawn 'red-eye' flight.  After a quick layover in Bogota, I was on to Santiago, Chile where I got a hotel for the night near the airport.  Here's a view of a hillside neighborhood as seen from my sixth floor hotel room. 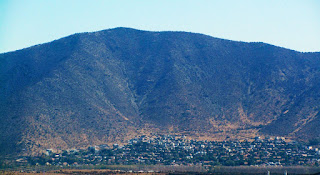 2AM wake-up call, 5AM flight from Santiago to Punta Arenas.  I was flying over the glacier-covered mountains and melt-water-fed lakes that I was here to hike. 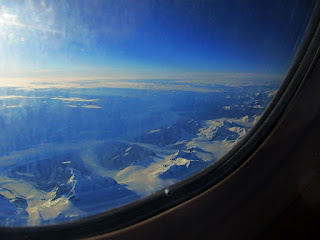 At Punta Arenas my driver, Camillo, an avid photographer, picked me up and we headed out across the flats of Patagonia. 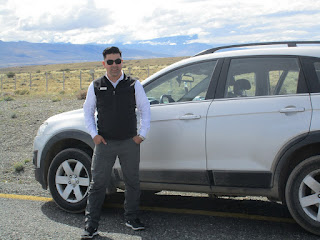 I was the only passenger, so Camillo and I stopped many times as he introduced me to the indigenous wildlife.  The drive felt more like a wildlife safari than a tedious commute.  Here's the ubiquitous Guanaco, wild relative to the domesticated llama. 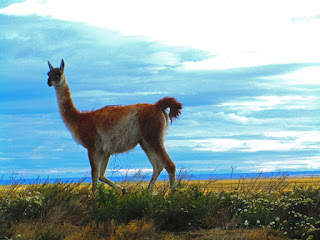 Next was a good close-up view of a Darwin's Rhea or ñandu, as it is called locally. 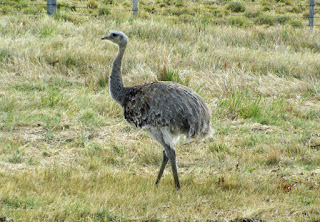 Then … who knew there were Flamingos in Patagonia.  Wind was nearly calm in this normally windy place so we lingered here and got lots of great shots. 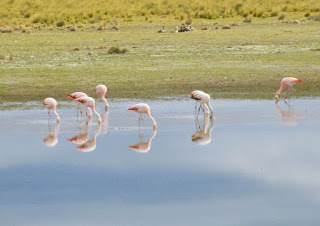 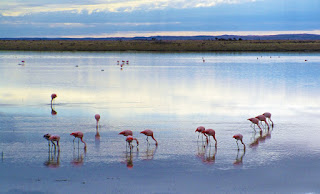 Camillo captured some good shots of a Black-breasted Buzzard Eagle, but my shots with my little point-and-shoot camera didn't come out too good.  As we approached the hotel, we stopped for the headline photo with the Rheas grazing with the mountains behind.

The wind was almost dead calm as I checked in to the hotel.  I got this shot from the dining area and lounge as I was talking with Basilio, coordinator of the hikes and excursions. 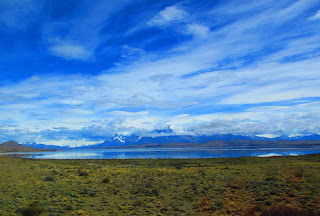 He said the lake is almost never this glass-smooth.  Maybe twice a year.  So I hurried to dump my stuff in my room, changed, and then headed down the trail through the 'backyard' and down to the lake. 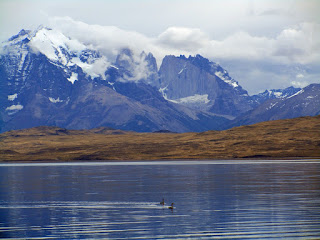 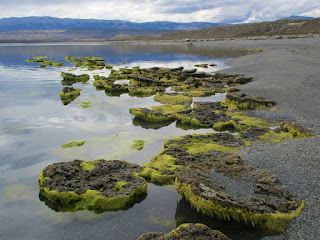 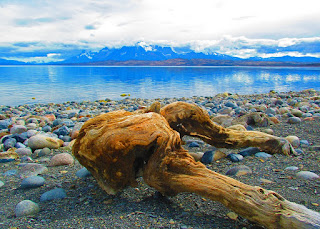 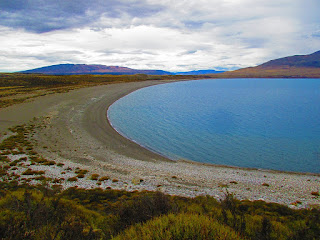 I did a quick six and a half miles along the lake shore and adjacent bluffs, then back to the hotel.  It's an award winning architectural masterpiece, and a bucket-list destination all by itself. 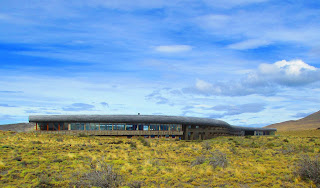 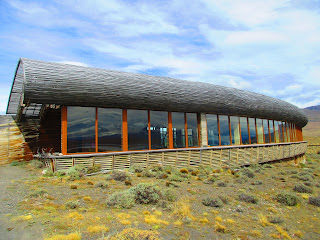 And every room has this view. 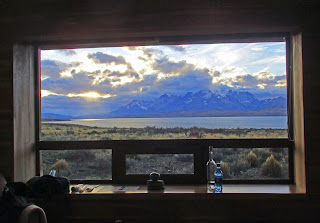 Stunning.  This was sunset on my first day in Patagonia.

Next day, my first full day, I had scheduled the iconic bucket list hike to the base of the towers--the Torres del Paine--namesake of the park.  That report is next.  Stay tuned.
Posted by PJ Wetzel at 2:31 PM