Month of Sunrises—Conclusion, with bonus days


Back in late March, having finished a major reading project, it was time for me to head back out and do some hiking.  I always like to give my hikes some greater purpose than just churning the legs.  So I decided I was going to hike the beach starting well before sunrise each day for a month and experience a month of new dawns.

I love sunrise as a dynamic experience.  Interacting with the weather of the morning, each sunrise is as distinctive as a fingerprint.  Even on a cloudy day like the one I found on April 18th (photo above), there's still plenty to enjoy while doing my favorite activity—walking.

The "month of sunrises" project is now complete, and I can report that it was a great success.

In fact, it was so much fun that I kept on going after the month ended.  As of this morning I have thirty-five consecutive sunrise photos to share.

The first 24 have already been posted.  Below are the links to those.

Introduction and the first three sunrises of the thirty-one (March 25-27).

Week Three, covering the sunrises of April 11 through 17

Because it was so completely cloudy on the morning of April 18th, I didn't expect to get a photo with the sun in it.  So I started taking other shots.  First was the selfie featured up top.  A little later I stopped to take this shot of the same fishing pier with a very rare beach sight—the exposed underbelly of the beach, a remnant of old 'fossil' wetland in black peat that is beneath the layer of sand. 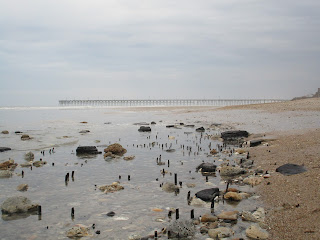 Barrier Islands are constantly migrating landward, and here is proof of it for Topsail Island.

After taking that photo I stowed my camera and was headed toward home when *lo-and-behold* the sun made a sudden very brief appearance. 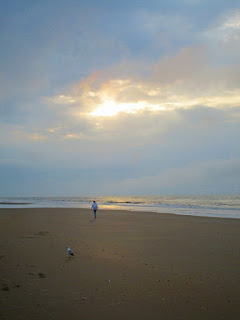 Success!  The week was off to a good start after all.

The next three days had sunshine in varying degrees.

By April 22nd the moon was waning, moving about an hour closer to sunrise each morning.  In the shot below, both the moon and the bright planet Venus shine through the early sunrise glow. 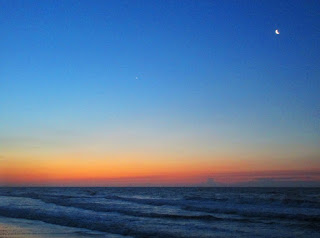 When the sun came up 25 minutes later I found a very laid-back and cooperative gull to pose for me. 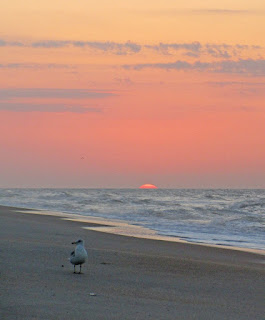 He/she stood around, preening and relaxing, while I snapped shot after shot. 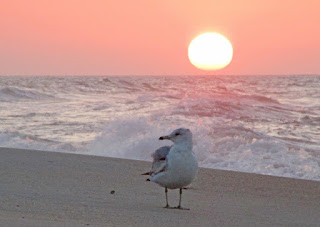 The next morning, April 23rd had a flat gray stratus overcast that wasn't going to break.  On some cloudy days I had found interest in the variety of clouds, but not this day.  My best sunrise shot was not much to write home about. 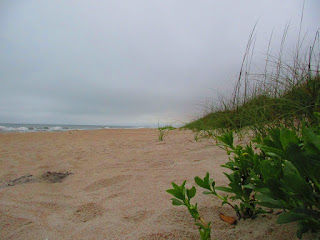 Then it only got worse.  April 24th was a major stormy day.  You may remember seeing the headlines talking about serious flooding in North and South Carolina.


But I was on a mission.  Luckily it was warm, in the 60's F.  Before sunrise I grabbed my umbrella and headed out into a deluge of heavy rain.  It let up a little later, long enough to include my Go-Lite hiker's umbrella in a photo with the wind-blown dunes and the ragged clouds. 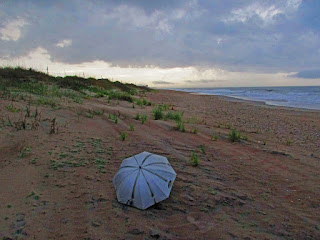 That was supposed to be the last day of this project—the thirty-first.  But wouldn't it be nicer to end a story about sunrises with genuine sunrise?  Well, I went back out the next morning and hit the jackpot.


And the next three mornings provided a nice variety.  Here's a wide view of the sunrise of April 26th. 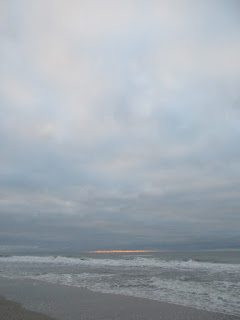 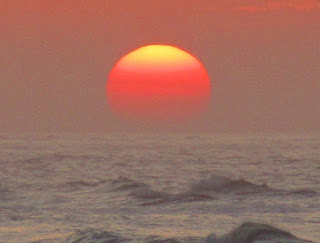 And finally this morning, after a cloud-shrouded sunrise, the sun finally emerged with a nice reflection in the surf.


So there you have it—thirty-five consecutive sunrises on the beach in east-central NC.  I had fun out there, and more fun sharing it here.  I hope you enjoyed.

The addiction continues.  The morning of April 29th I was out there again, and was privileged to capture a different sort of phenomenon.  Bat cloud! 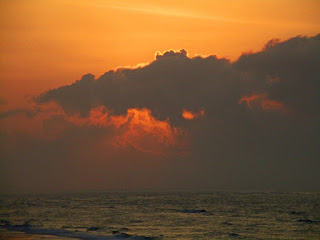