Beach bumming -- a Month of Sunrises 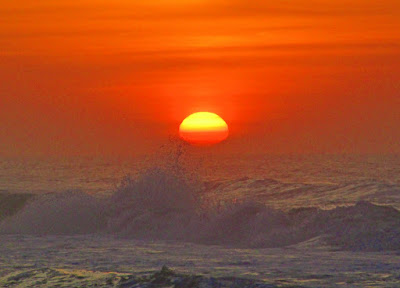 Gosh!~ Has it really been nearly three months since I posted something here?  What the flying-hairy-horse-potato have I been doing?  Why on this green Earth have I not been sharing it here?

Well, let's answer the second question first.  I confess that I have no good excuse.  I've been lazy and I've been too focused on other goals.  One of those goals has been to try to finish reading a behemoth 4.4-million-word Fantasy tale called The Wheel of Time, by Robert Jordan and Brandon Sanderson.  Honestly I wish I hadn't, but I own the books and I wasn't about to let them sit on my bookshelf unread.  Maybe I'll post details about this later.  By late March I had finally finished all fourteen books, and I've written reviews for each one.

The reading was my obsession.  I tend to be an obsessive personality.  I focus on one thing to the exclusion of all others.  So while I read I took a break from my more deep-rooted obsession--hiking, and that was not a bad thing.  The break let a minor tweak of my chronically weak left knee heal and recover.

To answer the first question, I've been spending most of these first few months of 2017 taking it easy at the shore, Topsail Island, NC.  Once I finished the reading, I headed back to the trail, or in this case the beach.  I slipped on a pair of Crocs on March 25th and headed out the door of my oceanfront condo, and have been hiking the beach at sunrise every day since.  I've made a project of being on the beach to personally witness every new arrival of the sun for a full month, through April 24th.

Here's where the laziness shows up.  I should have been posting these sunrise photos, but I kept putting the work off.  Now I have accumulated 22 sunrises to share, and a handful of other interesting sights captured in photos along the way.  I've hiked about 113 miles during this time, so my average morning sunrise hike distance is five miles.

To properly witness a sunrise I need to be out on the beach at least an hour before the moment the sun actually appears.  A sunrise is a dynamic thing, and the changes as it evolves are as exciting as that instant when the sun first appears.


At middle latitudes the sunrise 'process' begins with what's called 'Astronomical Twilight' a full hour and a half before the sun actually appears.  During the next half hour, depending on how clear the sky is and how much man-made light or moonlight is around, the first visible glow develops on the eastern horizon.  Astronomers shut down their telescopes this early, because their sensitive detectors are already picking up the sunlight being scattered by the far outer fringes of Earth's upper atmosphere.

An hour before sunrise when the sky is free of clouds and haze the glow is readily visible.  That's when what's called 'Nautical Twilight' begins.  For the next half hour all you can really see are silhouettes, such as that of a ship out at sea.  There's not enough light for the human eye to make out details or identify small objects.

Then starting a half hour before sunlight comes what's called 'Civil Twilight'.  At the beginning the light is about as strong as the light from the full moon.  Over the next few minutes most people will begin to feel comfortable walking around without bumping into things.

About twenty minutes before sunrise, the sun begins to shine on jet contrails and the highest clouds at the boundary between the Stratosphere and the 'weather layer' called the Troposphere.  This is when those clouds, made of ice crystals, begin to display fiery pink and orange glow.  It's when the real glory of a sunrise begins.


About ten minutes before sunrise the sun can begin to shine on the underside of middle level liquid-water clouds, creating perhaps the most spectacular moments of all.

Finally the sun actually peeks above the horizon and there are intense changes that sometimes last only seconds.  First there is the 'green flash'.  Because the atmosphere bends light rays of different colors by slightly different amounts, the shorter wavelengths curve around and reach the eye first.  But this really is a flash--way less than a full second.  A good green flash requires a haze-free sky, so it's best when the humidity is low.

The rising disc of the sun produces endless variety of effects as it climbs up through layers of haze and any clouds that are around.

No two sunrises are the same.  Meanwhile under my feet the tide and waves have sculpted a pristine new treadway for me.  That's what I love about doing these beach hikes.  I can hike the same geographical location over and over and have different surroundings every time.

Okay, so without further ado, here are the first three sunrises.  I will follow this post with four more posts covering a week each.  Enjoy.