After leaving Marathon there's not much land for a while.  There's Pigeon Key--a little dot that Henry Flagler's railroad route connects to ... 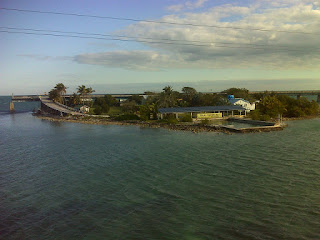 and then tiny little Money Key and the two Molasses Keys that he didn't bother with ... 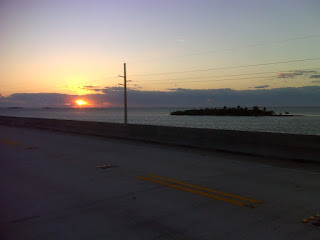 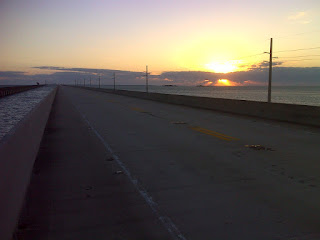 and not much else until Little Duck Key.  Flagler's Railroad bridge can be walked to Pigeon Key, two miles out from Marathon but access ends there (you can see the gap in the bridge at left in the photo above). The thru-hiker has to use the new US 1 bridge, which has no pedestrian walkway - see the headline photo.  That was a stressful walk, always worrying about getting sideswiped by some kid texting while driving or being blown off the bridge by an eighteen wheeler.  I enjoyed the views but was glad when it was over.

I walked other bridges today.  The next big one was on new highway across Bahia Honda Channel.  Here there are two new bridges side-by-side on a four lane divided highway, and they have wide shoulders, so I felt comfortable.  The old US 1 actually piggy-backs above the railroad trestle bridge here.  It looks like an engineering patch-up job, abandoned in 1969.  Hard to believe I drove this falling-apart old road bed back in 1967. 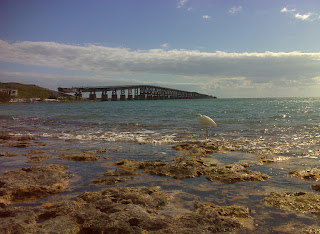 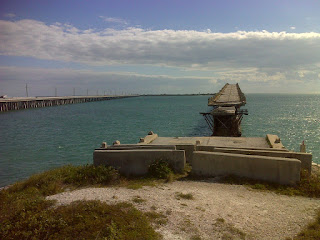 There were more railroad bridges that have not (yet) been restored for use by the Overseas Heritage Trail.  I hope they all will be someday. 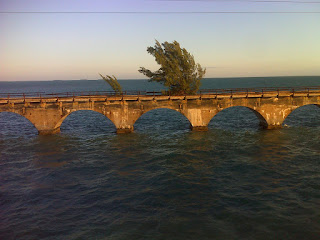 The history of those old bridges is precious.  Of course time and the sea air are not kind to human construction.  I came across an old railroad mile marker.  Originally I expect that there was one like this every mile, but in my traverse of the Keys this is the only surviving one I've seen. 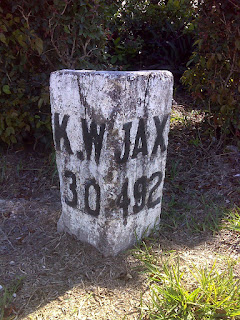 I ended the day on Big Pine Key, home of the endangered Key Deer.  They're tiny.  This skull was posted (literally) at an access point to a preserve area. 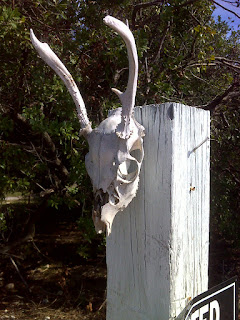 It's been a joy walking across the ocean.  I'm about three-quarters of the way to Key West already.  Barring some catastrophe I have just two days left before I reach the end of the road.  I'm already wishing it could go on forever.


Here's a map of today's segment, with attached links to more photos.