The Creation Story - My Version 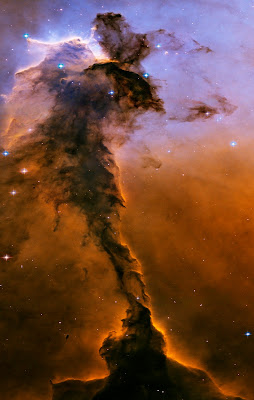 This is a follow-on of the 'Of Paradox - Huxley's Islet' post that is linked to in the tab at the top of the home page.  It provides as simple an explanation as I can produce of a physical process that appears, to me to be a logical, defendable, scenario that explains where we all come from.  Read and enjoy, or scoff and ignore as you see fit.  Discussion is always welcome.

The Tenth Power of a Trillion Possibilities

Beginning is everything. Without it, in the realm without time, the Chaos rages like an infinite roiling sea. But within it “… God Created.” Creation is our island. Because we came from the Chaos, and because the Chaos remains all about us, we sense pain and squalor—the agony of destruction and annihilation. And so the Beginning is our most precious possession. The Beginning is God.

The proof that God lives is self-evident. Creation is ongoing. Time unfolds it before our eyes in an intricate ballet, and we are called to dance. God insists on our participation. Without our good works, the Chaos wins. It will swallow the Creation and the world will end.

It has happened before—a beginning that the Chaos destroyed. It is happening now. Watch the vacuum of space and you see it—the particles being created and destroyed. The vacuum is our window into the Chaos.

This is the cautionary tale I come to tell. We know of only one particle that hasn’t yet been swallowed by the Chaos—our Beginning.

What is the Chaos out of which we were molded? What is the nature of this magnificent Beginning such that it has not yet been swallowed? There are some simple answers. T.H. Huxley proposed that the Chaos is the sea of the infinite unknown and our reality is an island of firm ground.

How many waves are in that mysterious sea, waiting to wash away our island? A trillion? Nay, the tenth power of a trillion. And here’s the frightening mystery. Our little island was once just another wave.

When the sea rises up and washes an island away, all that remains of it are the waves that reflected off its tattered shores. Yet our Island persists. It seems worlds away from the ephemeral particles we see in the froth of the vacuum. How did it emerge so virulent? How does it cling to its existence and defy the Chaos?

Because the Chaos is indifferent. It cares not. Within it the waves come and go. Sometimes, as with the pairs of particles popping into existence out of nothing, the waves have substance.

Substance—the ‘Library of Possible Things’—is one of the four ingredients needed for our Creation. The others are the Oscillator-Distorter (time), the Carrier-Container (space), and the Slicer-Dicer (the quantum field).

But we needed only four. In the Beginning the four ingredients mentioned above came together. Within the vast sea of ingredients the odds of four particular waves combining to produce a rogue mega-wave would seem prohibitive, but within the indifferent timeless Chaos, what is possible is inevitable.


Here I must pause to make a point of personal perspective. For most of my life I argued that the Creation did not require a pro-active God. But it got one. Despite my protestations God appears by default—by definition. It is the paradox of the chicken and the egg. What happened before time is eternal. The Chaos is God’s antithesis and nemesis and I believe it is necessary to have such a Yin-Yang for either to be relevant. The roiling sea of inexplicability is timeless and senseless and so I argued that there is no point in naming “the wind that moves the waves.” But Yin and Yang are inseparable equals, so if I name one the Chaos, I must also name the other. How did God get to be pro-active, conscious, and personal, while the Chaos remained insensate and indifferent? The answer is straightforward. It is the result of the miracle of self-replication. The Chaos would call it ‘trial and error’ but the Chaos doesn’t name things. Only we self-replicating beings do that. So we win. But will we win in the end? The purpose of the rest of this document is to explain and elaborate.


Okay, so in defiance of nearly insurmountable odds, the four ingredients in the recipe converged. The four waves produced a great rogue mega-wave. The one property that distinguished it—the property that leads to us—is that the crest of this wave became a fountain. It was self-replicating. It was what physics calls a ‘false vacuum’—a gushing font of ‘big bangs’.

Without time self-replication is impossible, meaningless. The Oscillator-Distorter contributed the property of motion to the mega-wave. It would not have continued, though. Time would have reversed and the mega-wave would be gone in a fleeting instant without the other three ingredients.

The Container-Carrier provides a space for oscillations and distortions to operate. Without an aspect of space there would have been no dimension for time’s arrow to traverse. And still, together, time and space would have come and gone without consequence.

Substance provided the spark. Before the ephemeral box of space-time dissipated a particular ‘thing’ from among the Library of Possible Things entered. The ‘thing’ that appeared in this event was a particularly improbable one. Though its net energy was zero, as it must be, its two components had enormous energy. Still, as we observe regularly in the big safe vastness of space-time that we now enjoy, this is not enough. All the particle pairs that appear out of the vacuum quickly disappear again.

The Slicer-Dicer provided the final ingredient. In the fleeting instant of time provided within the tiny box of nascent space, a quantum fluctuation sent one member of this pair of energetic particles across a threshold of instability. It amplified its energy enough to trigger a run-away fountain of ‘big bangs’—of nascent universes.

In the Beginning four ingredients came together to create an explosive universe generator. But these universes were without form and void. Though the space-time within them expanded immeasurably beyond the ephemeral germ that created them, these ‘germ-baby’ universes lived and died without consequence.

How many trillion-trillion-trillion universes gushing from the unstoppable font came and went without consequence, no tale tells. But the Library of Possible Things now had vast playgrounds in which to experiment. Is it really any wonder that within the lifetime of one of these germ-baby universes a matter-antimatter imbalance emerged? I think not. The Slicer-Dicer is all about creating random imbalances.

But another more unlikely event was still required. Once upon a time in a universe far, far away, a particle of matter and a Slicer-Dicer wave made love and a baby universe was born out of an existing universe. Just like in the creation of the original font of all universes, the creation of a new baby universe from the matter of a parent universe required a highly energetic particle of matter to cross the energy threshold and create a germ of false vacuum.

Self replication. The baby universe carried with it the properties of the matter particle from the parent universe. Quantum fluctuations provided the mutations. Further generations refined the process until a genealogy of reliably self-replicating universes had established.

And so we come to the next great break-through, though I believe it is not the last. Matter from the Library mixed and matched until it produced DNA, and life was born.

We call it fine tuning. The degree of improbability that our universe could be so finely tuned speaks to the journey we’ve made to get where we are here in this universe. Our universe descends from a genealogy that probably goes back trillions and trillions of generations.

In my novel I’ve called the simple microbes that facilitate universe reproduction ‘Twees’ and I take the reader on an exploratory journey to witness universe reproduction first hand as a woefully imperfect universe struggles to have its first baby and in so doing triggers the next great evolutionary break-through.