The Magic and the Tragic

Yes, it was a Jekyll and Hyde kind of day.  The good part -- the boardwalk through Rice Creek Conservation Area -- was so riveting that when the sun broke through in the midst of it, I was close to tears.  The bad part was torture by puddles, set in a dreary drizzling mist in an ugly man-made forest.

I am a technological dinosaur.  I've owned digital cameras that can take videos for years but have never attempted to take one.  Today I made my first crude effort.  I had to.  The best part about the boardwalk experience was the tropical sound of bird song amidst the verdant splendor.  But I made every mistake in the book--took the video in 'portrait mode' because I wanted to capture more of the vertical sweep of the bromeliad laden jungle.  Here's the clip.  I sure hope it works.


It was raining when I started my hike, so the mosses and lichens were radiant on the dark background of wet soil and tree bark.  This (the Hoffman Crossing swamp) was the first place that I saw bromeliads, and not just a few.  It was a veritable bromeliad city.  They were clinging to every tree from eye level to high in the canopy.  And they were sending out their bloom stalks.  Spring is upon us, it seems.  Here's a close up: 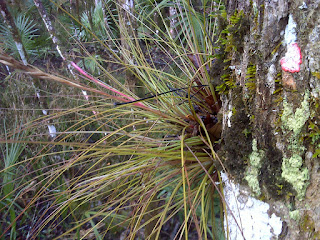 The tide began to turn from good to bad as I crossed Rice Creek on the Palatka to Lake Butler Greenway and was commanded by the orange blazes to ignore the newly posted "unsafe to cross" signs and pick my way across the freshly laid boards that were set on badly rotting century-old timbers. 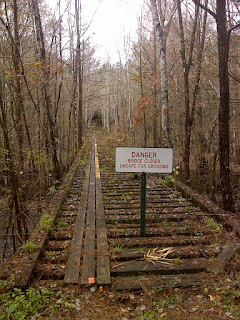 Amazingly, later in the hike there was yet a more sketchy crossing of a railroad trestle.  These timbers felt mushy under foot.  It wouldn't have been a long fall if I broke through, but somebody's going to do that one of these days. 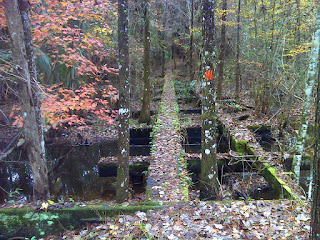 Then came the heart of the evil - the trail nobody cares for - the tale of a thousand water pits.  If the gauntlet of mud wallows wasn't enough, the vehicular joy riders left their calling cards thickly strewn about - beer cans by the hundreds. 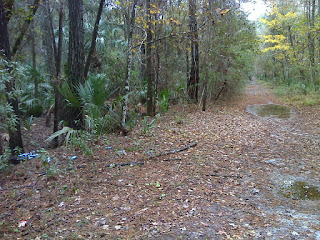 Okay, enough of the gloomy stuff.  By the end of the day, the private plantation was showing its sense of humor.  I guess the magic was winning the day.  The trees were doing a synchronized dance. 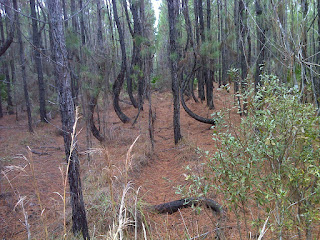 And so another day on the Florida Trail came and went in memorable style.  Can anything outdo today's broad spectrum of emotions?  It's hard to imagine how, but then it was hard to imagine that I could have a day like today.  Onward into the unknown!


Here's a map of todays wanderings, with links to more photos.