Back on the Mountains-to-Sea Trail, Waterrock Knob to Balsam Gap

One year later, almost to the day, since I left the MST to take a shortcut to the Appalachian Trail at my favorite spot - the Roan Highlands - I'm back to hike some more of North Carolina's distinctive state-wide trail.

The Mountains-to-Sea trail is one of a dozen or more state-wide trails in the United States, but I'd argue that no other state offers the degree of diversity that this trail has.  This nearly 1200 mile footpath takes the hiker from the palm trees of Topsail Island and the shifting sand dunes of Jockey's Ridge to the sub-Alpine forests atop the two of the three highest mountains east of the Mississippi River.

Following the MST west to east, you hike from Clingman's Dome in Great Smoky Mountain National Park to Devils Garden Overlook before leaving the Blue Ridge for good and dropping 2000 feet into Stone Mountain State Park.  Here begins a trek through Pilot Mountain State Park with its eerie monolith (reminiscent of Devils Tower in Wyoming) and then Hanging Rock State Park.

Next the trail takes a newly constructed route along Elkin Creek into the quaint town of Elkin.  There's a refreshing walk through this thriving downtown district full of quaint shops and restaurants, then the trail follows the Yadkin and Haw Rivers, passing north of Greensboro on trail along the shores of their watershed lakes and the Eno River, taking the riverwalk through the elegant historic town of Hillsborough, and trekking the long uninterrupted woods trails beside Falls Lake north of Raleigh.

From Falls Lake Dam northeast of Raleigh the trail gets on a nearly forty-mile continuous paved greenway with several stunning footbridges over the Neuse River that make a continuous off-road experience along the river from Raleigh to Clayton.  Next comes a Greenway through Smithfield, and after that the extensive nature preserve called Howell Woods Environmental Learning Center, all along the Neuse River.

From there the foot trail carves a delightful arch through the coastal plain in an area with more environmental diversity than almost anywhere else in the USA.  This 350 mile section of trail has its own name:  The Coastal Crescent Trail.  I could go on and on about the distinctive natural and historical sights that the hiker explores along this section and beyond to the Outer Banks, but I've rambled too much already.

The Friends of the Mountains-to-Sea trail is well-supported, well-run organization with hundreds of dedicated volunteers who are constantly working to build more trail and improve the hiking experience.  The hike I'm reporting here begins at Waterrock Knob on the Blue Ridge Parkway where volunteers have just opened a new two-mile section of trail at above 5500 feet of elevation.  It begins here at the Waterrock Knob visitor center parking lot ... 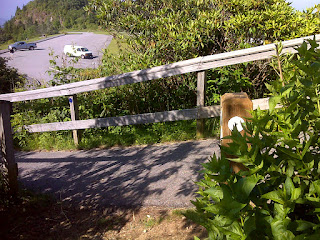 ... with this tacit invitation to plunge into the wild. 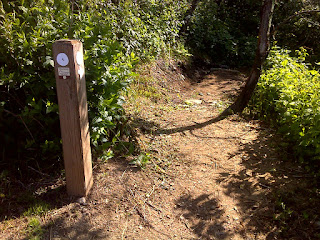 It descends a long series of well constructed steps ... 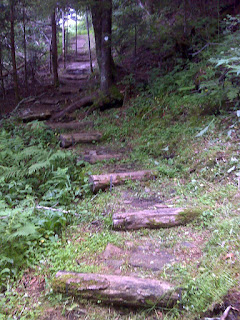 ... and follows the side slopes with grand views of the parkway below and the country beyond, 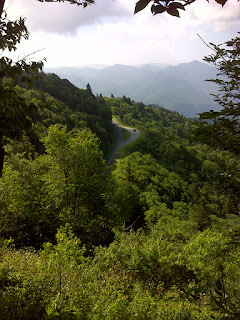 coming out at Fork Ridge Overlook on the Parkway.  After a short walk along the parkway I was glad to plunge back into the woods at Scott Creek Overlook.

The weather was hot.  It was the heat that beckoned me to abandon a month of beach walking and head to the high mountains.  In the lowlands afternoon heat index values soared well above 100 degrees.  Even up at 5000 feet, where physics of the atmosphere requires it to be about 25 degrees cooler, the hiking was hot and sweaty.  So it was wonderful to be able to soak my head in the stream above Woodfin Cascade.  The trail crosses a footbridge here, 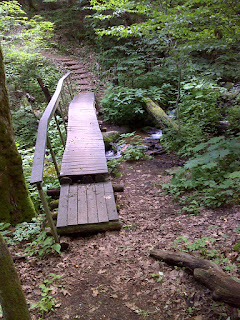 and a short side trail down to the Parkway brings you to the cascade proper.  You have to look for this waterfall.  Even though it's basically right beside the Parkway, it's not easily visible from either the road or the trail and no signs at the Woodfin Cascade Overlook on the Parkway point you to where it's located. 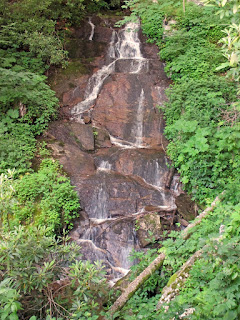 That's where I ended the MST hiking for the day.  I found that I was out of shape.  Beach walking does not prepare one for up-down mountain hiking.  I am doing unsupported out-and-back day hikes on this trip, not really trying to get anywhere in any hurry.  I hiked back to Waterrock Knob via the Parkway.  If you want to see views, walking the Parkway is the way to do it.  On the trail you're in the proverbial 'green tunnel' all the time.  So, though it was hot, the road walk had its own unique pleasures.

The side road to Waterrock Knob visitor center is actually also part of the MST.  Where it joins the Parkway there is a division of trails.  West of here the MST offers two choices - a rugged mountain route through Great Smoky Mountain National Park, and a 'River Valley Route' that actually begins with a very rugged ridge walk to Blackrock Mountain.  That route enters the woods right across from the Waterrock Knob/Parkway intersection, and is only marked with this generic post: 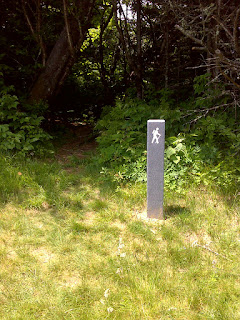 I'm leaving the hike west to Clingmans' Dome for another time.  For now I chose to head east.  Next day I started at Woodfin Cascades and did another series of out-and-back hikes, again taking the MST one way and the Parkway the other (except for a few lucky stretches where the Parkway *is* the MST) 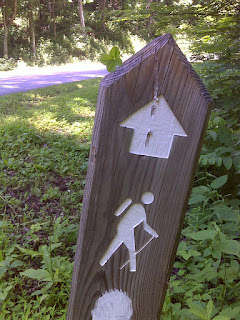 This includes the bridge over US 74 and the railroad track at Balsam Gap. 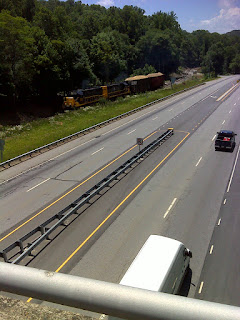 There is also an extensive road walk on loose gravel Greenspire Drive - much more shady than the parkway but tougher under-foot. 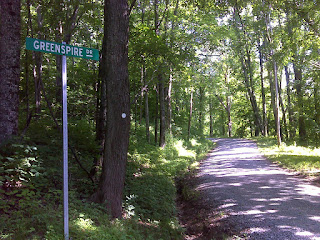 I actually went a little beyond Balsam Gap to where the MST crosses Hood Road, a dirt road that passes under the Parkway.  Near here I crossed a stream with an inviting little cascade, just right for dunking my head into while in a standing position. 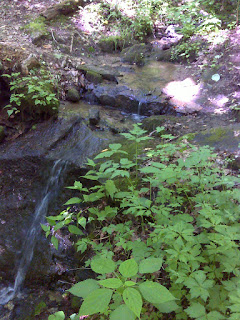 I continued on for a week of hiking, and even ran into an MST thru-hiker, who was within three days of finishing her hike.  Stay tuned for more reports.

Here's a map of the routes I walked as taken by my GPS.  The red 'pins' indicate locations of photos, including some not shown here.